This book is a deep dive into how racial resentments fuel political patterns, authored by a man who is both a sociologist and psychiatrist. Through interviews and data analysis, Metzl explores why many lower income white Americans are drawn to politicians who pledge to make their lives ‘great again’. The desire to remain at the top of a perceived social hierarchy, Metzl explains, can leave people blind to the fact that many of the policies they support directly harm them. The book is a deft blend of economics, politics, public health and social science that looks at both the motivations behind conservative voting decisions and their consequences. After the rollercoaster of the 2020 election race, this book is well worth a read – charting the ideals that have created a divided society in America and why Biden emphasised in his acceptance speech that he ‘Pledge[s] to be a president that seeks not to divide, but to unify’. 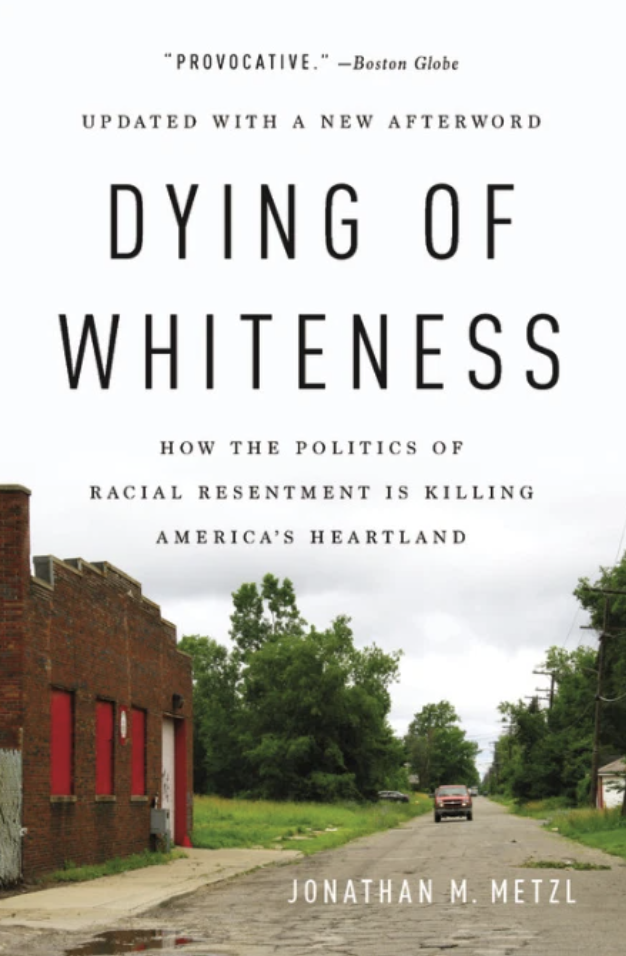 The book has also received a significant amount of press coverage and won the 2020 Robert F Kennedy book award. Metzl appeared on several American news shows to discuss his findings in the run up to the election, including CNN and MSNBC discussing whether Trump was a ‘health hazard’ to his own voters. His work on gun laws also caused a stir – with people reconsidering what it could take to prevent mass shootings. Further recognition has been sparked by the coronavirus pandemic. Metzl’s exploration of white identity politics goes part of the way to explaining the responses of different states to the pandemic and in a time where the death toll is rising day by day, everyone is looking somewhere for answers.

The book is divided into three sections focussing on case studies in different states. Each state provides an example of a policy that has claimed to bolster white America but has had negative impacts on white lives.

Metzl starts in Missouri, where there have been huge changes in gun legislation over the last ten years. This was exemplified by law SB 656 or the ‘guns everywhere bill’, which allowed concealed firearms to be carried by anyone  with no requirement for gun education. This created a culture where guns were central to life and indeed in focus group interviews when asked what guns meant to them one participant answered ‘Freedom. Liberty. Patriotism’. Metzl highlights the racial undertones of carrying guns, explaining how historically white citizens were granted gun ownership while black citizens were not. He also examines the politics of gun research, and how the National Rifle Association influenced a 1996 law that placed a ban on federally funded grants for gun research. Metzl’s team explores the consequences of these relaxed gun laws on the citizens who promote these ideals. He focuses on gun suicides among white men, providing some stark figures; for example, in2014 white men formed 40% of the population but 80% of gun suicides. Travelling to support groups for families who have lost loved ones to gun suicide, he explores whether their views towards gun ownership have changed. Despite highlighting that white male suicide rates are lower in states with stricter gun laws, participants overwhelmingly responded that guns were not the problem. The data provided in this chapter leaves you uncomfortable, and nervous about a state where people regularly take guns to the supermarket.

The next chapter explores attitudes to the Affordable Care Act (ACA) in Tennessee, and the campaign promises by Trump to replace the ACA with the nebulously described ‘something better’. Tennessee used to be a leading light in healthcare in America, creating ‘Tenncare’ which was trying to expand healthcare access. However, the failure of this intervention along with deep seated historical factors resulted in distrust of government interventions and blocking of the ACA.

In a series of discussion groups about health, lower income white men explain that they would rather die than give minority groups or immigrants more access to healthcare, and view the ACA as a ‘waste of hard earned tax dollars’. Metzl describes this as a ‘tragic irony’ with those who depend on assistance for healthcare refusing government aid, with a desire to ‘live free but die sooner’. The author highlights some statistical modelling of ‘life years lost’ due to blocking the ACA, by comparing Tennessee to Arizona and New York. These states introduced the ACA and there was a reduction in overall mortality of 6.1% and in non-white mortality of 11.4% from 2011-15. This extrapolates to between 6,363 and 12,013 white lives that may have been saved if Tennessee had expanded Medicare. However, the resistance to government interventions and the frameworks of racially-fuelled politics blocked this programme. This is fascinating for health policy makers because the psychology helps you understand the contradiction between what is in a person’s best interest, and what they actually vote for.

The final segment discusses austerity measures in Kansas and in particular the funding cuts to schools, examining how education influences long term health outcomes. Metzl provides a useful outline of austerity economics, equipped with graphs to explore how the tax cuts affected different income brackets and demographics. The reductions in school budgets forced some schools to shut early in the academic year and in 2016 Kansas made national headlines after the Supreme Court had to intervene, explaining that the state had not abided by the constitutional mandate to finance public schools equitably. Again, through his interviews with civilians Metzl teases out the mentality behind why many among the white population still believed in these cuts with the claims that the ‘government were wasting money on people who don’t deserve it’. Overall this resulted in increased number of dropouts and an ongoing stain put on the poorer inner city schools. Metzl then goes on to explore how education is a major predictor of health outcomes. For example US adults without a high school diploma die 9 years before college graduates.

This book deftly explores several key American policies, many of which are often in the news. The blend of psychology, sociology and statistical modelling is fascinating – allowing one to understand the reasoning behind the choices made and then see the consequences. At times there is a risk that the book can feed into stereotypes of ‘white’ and ‘black’ citizens of different income brackets; however, Metzl is careful to balance his opinions. There are also rays of hope– with people who have changed their minds when faced with the real-life consequences of different policies. This book is an interesting read for public health scientists, as it explores why people may reject interventions designed to help them. Overall, this is a fascinating study of how frameworks of white racial resentment shape debates and attitudes towards legislation and how the social structure of racism harms those who uphold it.