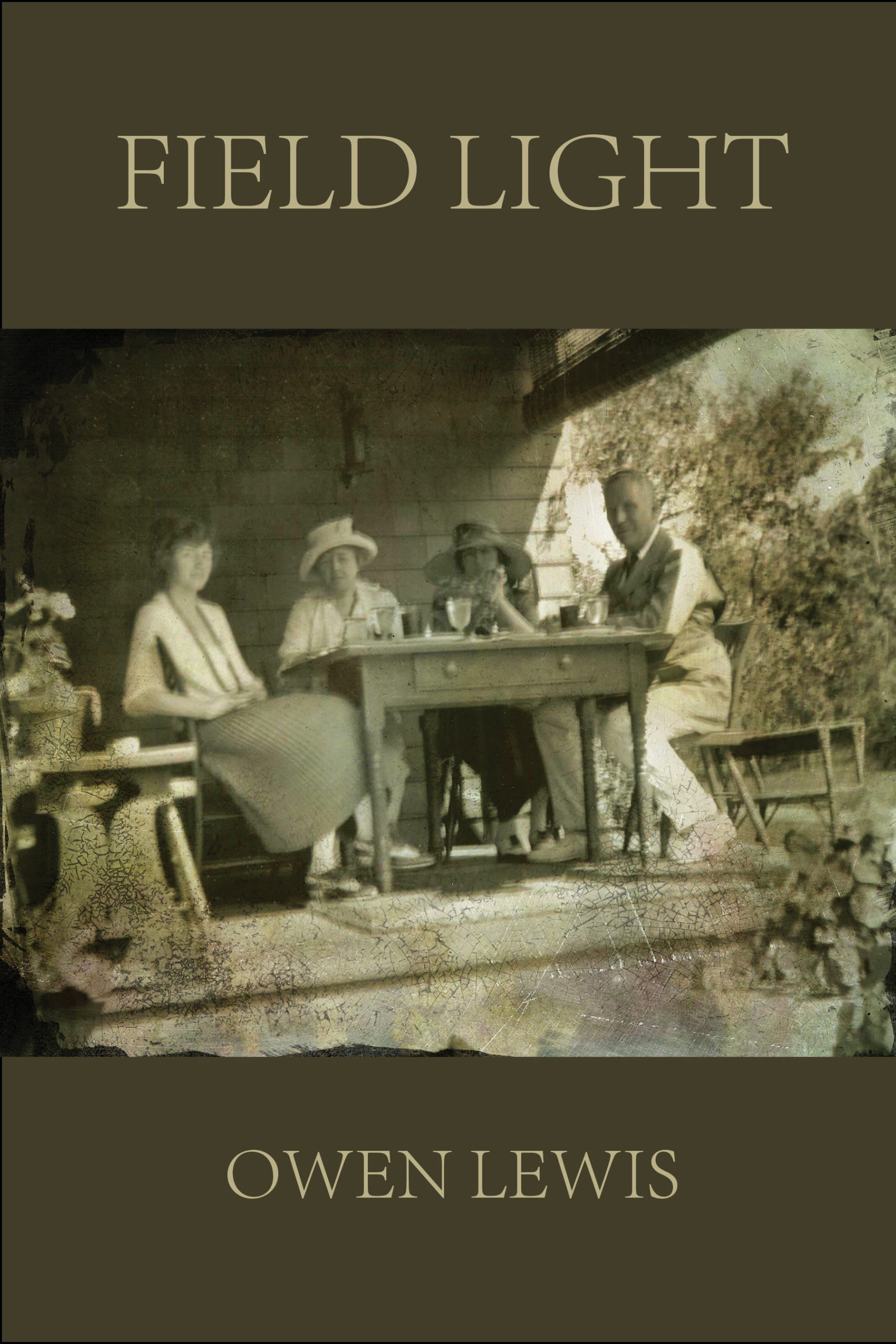 At the heart of Owen Lewis’ latest collection of poems, Field Light, is the story of a middle-aged man at a multi-focal impasse—emotional, temporal, marital, professional.  That man is Lewis himself, who finds himself unable to move beyond a crucial juncture in his life. The first image in the book fittingly evokes a mood of paralysis and  loneliness, featuring a long, slow train at a village crossing, a train unable to advance swiftly:

and take him where he
needs to go.  A lone driver stopped

In Field Light as in life, Owen Lewis is a professor of psychiatry in New York City who has for years summered with his family in a small town in the Berkshire mountains of Massachusetts.  But in this country setting, with its rich and colorful past, he is at this point dépaysé, just over a dispiriting, bitterly contested divorce and now estranged and alone.  His children, long since adults, have left, and his centuries-old, charmingly dilapidated Berkshire house, the Dormouse, is empty; even its garden has grown in ways that underscore the passage of time.  In a lonely, melancholic frame of mind, he sees and listens to a single cricket that stands out against a distant orchestral background of many:

From a corner of the porch a cricket solos
the gaining dusk, a distant chorale

these oboes of summer’s end;

Actually, despite his long association here, Dr. Lewis has always been something of an alien in this rarified Berkshire setting, and well aware of it, too. But he has never felt his outsider status more keenly than he does now.  The grandson of Eastern European Jews, Dr. Lewis is living in a land of blue-blooded Anglo-Saxon Protestants, even if one of the more psychotic of them wants to be a Jew herself or self-identifies as a “Betty, the lesser Vanderbilt.”  No one is taken in, either, by the transition from Lifshitz to Lewis and the Welsh-sounding “Owen.” (What comes to mind is a scene from the film Annie Hall, in which Woody Allen, meeting Annie’s upper-class Gentile family, suddenly appears dressed as a Hasidic Jew, with a long grey beard and payot, because that is how he imagines he is being seen).

The Austen Riggs Center—the famous psychiatric hospital in Stockbridge, Massachusetts–is itself redolent of historical anti-Semitism, not to mention overt racism. In his newly acute take as an outlander in a well-known environment, Dr. Lewis’ own  professional identity as a psychiatrist is also unexpectedly threatened, its sturdy conceptual underpinnings shaken.  And he is not spared the peculiarly Jewish capacity for self-hatred, citing how Freud was fascinated by Jung as a Gentile:

This man without a country—where is he to go, what is he to do, now? In one of many emotionally fraught moments, he finds himself surrounded by a neglected garden of long-felled peach trees and barren pears:

…A garden of beauty, not sustenance.

As a variant on the same theme, he asks, referring to himself in the third person:

What else has he forgotten that he needs?

It’s not as if Dr. Lewis has never been alone in the Dormouse.  In fact he has spent longish periods alone there in past years during sabbaticals, but there is an altogether different feeling now:

He should be used to this unfamilied state by
now, but he’s not. No visitors. Not one. His only compan-
ions, an old photograph.

In Field Light, Dr. Lewis has created a new poetic genre seemingly out of whole cloth, an innovation that works wonderfully well, highlighting aspects of the poet’s restless, unsettled state that more conventional formats might tend to neglect.  Intermittently, in half-poetry, half-prose digressions that function as a kind of sung-speech between the more musical lines, there are detailed asides describing the area’s aristocratic forbears; further references to anti-Semitism in the history of medicine and literature; and a satirical picture of how the eccentric Austen Riggs Center caters to patients with pedigreed names and bizarre delusions.

Somehow W.E.B. Du Bois, himself born and raised in the Berkshires, also makes an appearance in the mix.  Many poets are referenced in context—William Carlos Williams (another physician-poet) and Walt Whitman, particularly, but nearly a dozen others as well. With a gift for revelatory irony, Dr. Lewis presents these passages in a witty, droll tone as they range widely over vast areas of literature, psychiatry and local Berkshire lore.  For this reader, the semi-prose interludes serve a larger purpose of confirming Dr. Lewis’ overwhelming aloneness in his world—this despite his splendid command of the history of ideas.

Then, these passages often give way to leaps of lyric beauty and penetrating insight, as in this powerful section:

further afield, more light than a pair
of human eyes can see, they lend

Near the end of the book Dr. Lewis at last begins to confront the “limits” he has imposed on his own life, allowing him to contemplate paths to healing. As a visiting professor at Austen Riggs, he awakens to the notion that he may be able to integrate his psychiatrist and poet personae, enriching each of them and creating the potential to reach for levels of satisfaction and meaning that he had never thought attainable. This would entail a process of dissolving boundaries between patient and doctor by:

rush of syllables become his
crazed words becoming his

in the moment of joining her
and beyond, becoming the patient’s

But few resolutions could be as serene and hopeful as the final one in Field Light.  Having come full circle, at summer’s end Dr. Lewis finds himself back at the village train station, but now he has acquired a new awareness of time. In that critically important sense he has evolved. In years, he is on the cusp of old age, but in some ways, maturation has not kept pace until this moment. In full recognition of onrushing time, Dr. Lewis wills himself to move on, inventing from the train’s distant honking sound an imperative to pull himself up from loneliness and depression and embrace the possibilities in what remains of his life.  It follows that a gently scolding line, one that might be delivered by a loving parent or a wise uncle, admonishes him to:

Get on with you!

and is impressed with special emphasis.  It appears twice in the last poem, the first time with an exclamation point, the next with a period, but both in italics, doubly denoting significance:

Get on with you.

To buy a copy of ‘Field Light’, please find the link here.