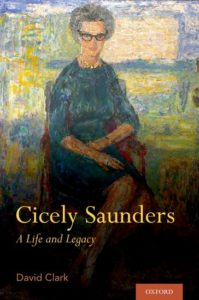 This biography, almost 20 years in gestation, provides an encyclopaedic account of the life of Cicely Saunders, often described as the founder of the modern hospice movement. The book comprises detailed chapters on Saunders’ childhood, her nursing and social work, her medical training, her planning for St Christopher’s Hospice, the global expansion of the hospice movement, and her later life. These are broken down into non-linear thematic sections in order to give a sense for each period of research, personal and religious developments in Saunders’ life, alongside key concepts and figures in the development of what would become palliative care.  These chronological chapters are bookended by a prologue and epilogue written in the first person explaining Clark’s personal encounters with Saunders, his understanding of her legacy and his vision for future research in what he tentatively terms ‘Saunders studies’ (318).

Like many people who achieve great things, Saunders was something of a self-mythologiser and Clark carefully navigates her complicated background as a nurse, social worker, medic and (initially) a social science student, as well as her early, difficult (and later unorthodox) family life. His extensive archival research is palpable and is corralled into passages which bring valuable context to, for example, Saunders’ relationship with David Tasma or the gestation of her early ground-breaking publications on pain management. But the book is also informed by numerous interviews conducted by Neil Small and later Clark, which often provide the vital sense of a living individual, annoying neighbours by erupting into noise with friends at 10pm or inviting visitors into her office for a double scotch.

In part due to the candid nature of Clark’s later interviews, this was always planned as a posthumous book and it clearly has a freer rein than the earlier biography of Shirley du Boulay (1984) whose text was repeatedly altered by Saunders’ keen eye for posterity. Clark often positions himself as a critical friend to the current practice of hospice, palliative and end-of-life care, someone who supports its aims and outlook but maintains a critical distance in order to shine light on areas for improvement. As such, he is not afraid to address how the hospice movement rests in part on Saunders’ two ethically dubious relationships with Polish men dying in her care, although he is careful not to pass judgement on complicated events for which he only has one side of the story. That said, he is happy to muddy the waters of Saunders’ fairly clear origin story of hospice; for example, slyly suggesting that Tasma’s much-quoted motto ‘I’ll be a window in your home’ is ‘unverified in the contemporary record’ (60).

The book will be of direct interest to a wide range of those within the palliative care community as well as more general readers sympathetic to Saunders’ emphasis on the holistic care of the whole person. Moreover, with his blend of historiography and sociology, Clark also appeals to medical humanities scholars and, through his initial enquiries into some of Saunders’ literary influences such as C S Lewis or Julian of Norwich, opens the door to further research in this area.