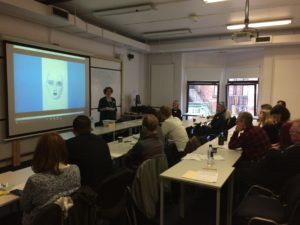 This two-day workshop held at the University of Glasgow, 4–5 May 2018, brought together 35 delegates from Australia, Denmark, Germany, Ireland, Norway, the UK, and the USA. Participants represented a wide range of institutions, career levels, and disciplines. The aim of the event was to consider the value of cultural and historical perspectives on the relationship between the gut and the brain. It built on the success of ‘Gut Feeling’, a workshop held in Aberdeen in May 2017, which has led to a volume of essays (Gut Feeling and Digestive Health in Nineteenth-Century Literature, History and Culture, Palgrave: forthcoming). ‘Gut Feeling’ was also followed by a Round Table in Glasgow in November 2017 on ‘Digestive Health: Then and Now’ where we discussed the importance of developing a more ambitious chronological scope for the project. Whilst the volume of essays maintains a tight focus on the nineteenth century as an important moment in the Western understanding and perception of the gastroenterological system, this workshop in May 2018 considered the development of discourses on digestive health after 1900 and in relation to the specific question of the gut-brain axis, which is now drawing increasing attention in the scientific community.

The workshop opened with an excellent and highly inspiring plenary by Professor Elizabeth Williams (Professor Emerita in History, Oklahoma State University) who considered how the gut has been gendered throughout history and in different nations. A thought-provoking response then followed from Professor Fay Bound Alberti (Honorary Senior Research Fellow in History Queen Mary, London), who could not attend in person but sent her response in advance, which was read out by Manon Mathias. In her response, Alberti reflected both on the lack of specificity in our use of language around ‘the gut’ and also the role of race and ethnicity alongside the gendered discourses examined in Williams’ paper. The ambiguities of language in relation to the gut-brain relationship continued to be a key theme in the following papers, which examined the topic in history, literary studies, anthropology, theology, biology, mental health, end of life care, and museum studies. Further strands which emerged include the importance of national differences, such as the varying emphasis on class and gender depending on the context, and the dangers involved in immediate and uncritical acceptance of new thinking about the microbiome. In addition to the academic papers, delegates also enjoyed a guided visit to the University’s Anatomy Museum and a participatory artistic workshop in which we explored our intellectual findings from the event using physical methods including drawing and craftwork. Plans are now underway to publish a special issue of a journal and to establish a funded, public-facing network on Cultural Attitudes to Gut Health. The event was generously funded by the Society for the Social History of Medicine, the British Society for the History of Science, the British Academy, and the University of Glasgow School of Modern Languages and Cultures.