In this blogpost we have Raghda, multi-talented Arab artist, in conversation with our Film and Media Correspondent, Khalid Ali. 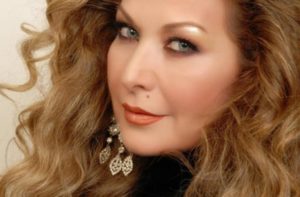 Not many artists can claim as many titles as does Raghda, an Arab actress, poet, journalist, humanitarian and activist. Making her acting debut in The Peacock (1982), directed by Kamal Sheikh, she played the enigmatic bereaved woman whose sister was killed in suspicious circumstances. Raghda immediately caught the attention of Arab audience as a new talent to look out for. She fulfilled her early promise by acting in and winning several best actress awards in films like Crab (1990), Desires (1994), and Lobster (1996). Such films were influential in talking candidly about Arab women’s suffering from domestic violence, gender inequalities and objectification.  Known for her authentic portrayal of characters on screen, Raghda elaborates:  ‘Some roles were more challenging and significant than others. In Desires I played the role of a frustrated woman who indulges in her fantasies and ends up entangled in a sex-slave trafficking ring. That role was a totally new experience for me. I embraced wholeheartedly, and in great detail the physical and emotional traits of my character. I relate to films that tell stories of human suffering without an expectation of awards. However I was pleasantly surprised to win the Best Actress trophy from Alexandria Film Festival for Desires.

In spite of winning major awards, Raghda is very critical of her early rise to fame: ‘As much as I am content with my early Egyptian films, I was truly able to explore my acting potential as a character actress in two Syrian landmark films; The Borders (1984), and The Report (1986). Both films were written by Mohamed Al-maghooth and directed by Duraid Lahhaam. They were political and historical statements chronicling the plight of the Arab nation in the 80’s, exposing the demise of the nationalist agenda, social and political decline, and government corruption’.

International literature had a significant influence on Raghda’s career; Lobster was loosely-based on William Shakespeare’s The Taming of the Shrew.  In 1988 she acted in Salome, an Egyptian theatre adaptation of Oscar Wilde’s play, and in 2016 took the leading role in Bertolt Brecht’s Mother Courage for Egyptian theatre. Extending her creative talent to musical theatre, she acted and sang in a musical, The Voice (2006) with Rahbani brothers playing several historic women figures. Other politically-charged plays – The Hostages (1998), and Stories Never Told by Shehrezad (2005), and Balghess (2011) – all challenged Arab national identity and called for social reform.

As a wife and mother to three children as well as juggling several creative outlets, Raghda comments; ‘I was hyperactive and driven by an urge to tell real stories. In the 80’s, I was writing weekly columns for several Arab periodicals and journals, such as Al-Sharq Al-awsat, Zahrat Al-khaleej, Al-sadaa, and Kol Al-nas. At that time politics and religion were taboo subjects, so most of my articles echoed social issues in everyday lives. In addition to my commentary articles, I wrote short stories and poems for Dubai Al-thakafeya- Dubai Cultural Bulletin. Some of my literary work was published; a series of articles in a book, Running Commentary- Youmiyat ghareya, and a poetry collection, Seasons of Love.  I also hosted a cultural program, ‘Saloon’, for six years where I interviewed prominent Arab intellectuals, philosophers, artists and politicians’.

As determined to expose social injustices in film and theatre, Raghda also supported several Arab nationals in their time of need by being physically present in the centre of war-torn zones in Iraq, Lebanon, Syria and Palestine from the 90’s till the present day. She was the first high-profile celebrity to engage actively in makeshift hospitals, helping wounded civilians and sharing their daily horrific traumas.  She strongly identifies with her Arab affiliations preferring to be called ‘an Arab artist and activist, rather than Syrian or Egyptian’.

After a long and luminous career in TV, film, radio, theatre and media, Raghda still has unfulfilled dreams of lending her voice to marginalized characters; ‘I want to express the struggles old people face in modern day. Old age is a rich world that demands to be seen and heard’.

She remains a true believer in exploring the unknown, fighting for what she believes in as a champion for oppressed human beings around the world. In one of her poems, she eloquently describes her vision:

‘I will ride my journey

And search for a new love

My memory and I

will disfigure and acquire new dreams.’