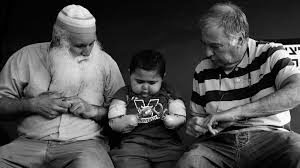 We present a guest review by Professor Robert Abrams, Weill Cornell University, New York. The film will screen in both Toronto and New York.

In the opening scene of Muhi- Generally Temporary (By A Thread), a critically-ill young infant from Gaza is allowed into Israel through the Palestinian checkpoints for emergency medical treatment.  From there, the scene shifts to show that the child, Muhi, is now a four-year-old boy whose rare autoimmune disease has required, in order to save his life, a quadruple amputation—both legs, both arms. [Link to trailer]

At least one part of the film’s initially puzzling title—“by a thread”– becomes clear almost at once. We see that Muhi (an affectionate diminutive for Muhammed) has become a de facto long-term resident of the Tel Hashomer hospital in Israel because his native Gaza has no advanced medical care.  This young quadruple amputee is cared for by warm-hearted staff and looked after by his doting grandfather, Abu Naim.  But Abu Naim has been denied a work permit in Israel or even to leave the hospital grounds.    Muhi bounds down hospital corridors on his new prostheses and passes his 5th, 6th and 7th birthdays. Not only is his own survival still medically precarious, he is also hanging by the thread of his grandfather’s life.

But will Muhi ever be securely reunited with his mother, who pines for him and he for her? Muhi’s mother has a large family of other young children at home in Gaza, but the real barriers to her visiting Muhi are the formidable and contradictory requirements of 3 border checkpoints—that of Hamas, Fatah and Israel. So Muhi’s mother cannot readily manage to see him, and his grandfather may never be allowed to return to Israel if he visits his family in Gaza. Then there is the central oxymoronic twist to the story: As the main part of the title suggests, this family is trapped in a temporary situation with every expectation of its becoming “general,” which is to say, permanent.

A deep divide exists between the abundance of love inside the hospital, and the outside world where anti-humanitarian forces operate at every turn.  The love comes from Muhi’s mother and grandfather and also the Israeli staff, in particular a kindly Jewish volunteer at the hospital, Buma. The cruelty derives from the Israeli government’s harsh bureaucracy on one hand, and the unending internecine warring of Hamas and Fatah on the Palestinian side. A great irony is that as a consequence of hatred and division, Muhi grows up speaking both Hebrew and Arabic and can recite the traditional prayers of both Jews and Muslims.

One of the joys of the film was watching the exchanges between Muhi and his grandfather and between Muhi and Buma.  Muhi asks them the hard questions that children do, pleading to know why he has lost his arms, his legs, and especially his fingers; or how it is that some of us must be soldiers; and other unanswerable enigmas. Why this, why that? But Abu Naim and Buma can be protectively evasive, too.  They don’t tell the little boy that the frightening sounds heard overhead are those of missiles. They find ways to allow Muhi to mourn the loss of his limbs, normalize his disability, praise him and love him.

At many points this film is almost unbearably sad to watch, set against an unpromising background of catastrophes past and present, personal and political.  But it is also filled with rewards.  Within it are wonderful demonstrations of the humanity that transcends boundaries and checkpoints, of the healing power of parental love, and inspired child-rearing conducted against all odds.