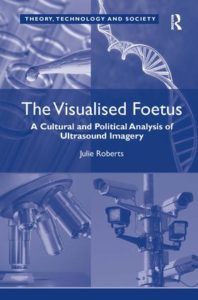 Julie Roberts’ book delves into the muddy distinctions between the medical, the social, and the cultural, by using an emotive nexus point; the foetus, and its representation on screen. The monograph is based on Roberts’ PhD and was originally published in 2012 before being reissued by Routledge in 2017. It takes account of previous feminist criticism of ultrasound technology as a means of extending the medical gaze inside the body of the mother, intervening in her experience of pregnancy and promoting a foetal autonomy that may be in danger of putting women’s access to abortion and related healthcare at risk. However, while summarising this point of argument for readers, Roberts investigates the uses of more recent technology, particularly 3D and 4D ultrasound, in influencing the reception and cultural understanding of ultrasound imagery.

Readers of the blog will likely be most familiar with 2D ultrasound, which is the version used on the NHS and in many pregnancy announcements on social media; 3D gives a far more detailed image of the foetus’ face and other features while 4D takes a series of 3D images to produce a moving image, as if the foetus is being directly viewed in the womb in real time. Roberts argues that the increasing perceived realism of these images erodes the viewer’s awareness that what they are viewing is a representation rather than seeing the foetus directly, and that this can have some impact on the abortion debate and on other issues surrounding pregnancy; when the image apparently becomes clear enough to ‘speak for itself’, there is the potential to lose sight of scientific evidence (if you’ll forgive the pun).

Some of Roberts’s research involves her observing scanning procedures at a clinic and recording the interaction between parents and sonographer that occurs at a scan, interactions that often personify the foetus and attribute personality to its features or movements while marvelling at the technology and the visual images produced. She also surveys YouTube videos for ultrasound imagery and takes an example of a ‘mommyblog’, blog from: a baby, in order to give some idea of the discourse taking place around pregnancy and ultrasound scanning online, while admitting that ‘the Web is too large to be surveyed in any complete sense’ (128).

By surveying the debates surrounding the uses of ultrasound from its origins, the use of 2D imagery as a commonplace modality, to the increasing availability of 3D and 4D so-called ‘bonding’ scans through private providers, Roberts shows how the foetus has been constructed through technology throughout the twentieth century and invites the reader to consider how meaningful the distinctions between the medical and the social really are.