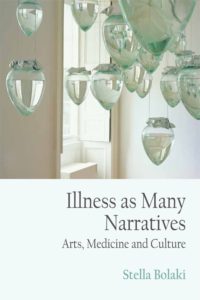 Illness as Many Narratives: Arts, Medicine and Culture

Stella Bolaki’s Illness as Many Narratives introduces several instructive case studies that squarely fit into the critical mode of the second wave of the medical humanities. Drawing on diverse arts and media such as photography, film, animation, performance and artist’s books, the author argues for more extensive cross-fertilisation between contemporary arts and media practices and the medical humanities. Bolaki’s various interpretive approaches are offered as tools that aide in strengthening the dialogue between medicine and broader culture.

The concept of the ‘critical’ in the medical humanities has recently been defined as the ‘embrace of new historical, cultural and political perspectives, as well as different questions and methodologies.’ (Whitehead & Woods, 3) It is guided by the question how one might ‘productively rethink the notions of collaboration and interdisciplinarity’. (3) It is exactly this quest for collaboration and interdisciplinarity Bolaki successfully models in her book, thus adding new perspectives and theoretical tools from the arts and media to the illness narratives of the first wave and to the alliance with the social sciences of the second wave.

In the Introduction, Bolaki broadens the scope of narrative to include forms of art and the media that are related to communicating. These ‘emergent narratives’ allow in various forms and structures to tell of the messiness, complexity, plurality, and diversity of illness experiences while at the same time summoning ethical perspectives toward the nexus between individual socio-cultural and medical predicaments. This leads to the core of her argument, namely that ‘[i]t is the active fashioning of tools, this constructive process that draws on different disciplines and perspectives, that I argue should be at the heart of the critical medical humanities.’ (12) Ideally, this set of critical tools proliferates mutual interplays between the arts/media and the medical humanities, a ‘critical interloping’ (13) that decenters the literary narrative form in favor of collaborative and interdisciplinary representations.

In the chapters that follow, Bolaki introduces a variety of emergent illness narratives. She begins with two very dissimilar photographic representations of breast cancer, The Picture of Health? (1985) by Jo Spence, and Self Portrait in a Single Breasted Suit With Hare (2001) by Sam Taylor-Wood. The two photographic forms of exposure—one revealing and one concealing—are remarkable examples of how word and image together mediate the illness experience. Verbal aides, such as captions, interpretations, photo essays, other fragmented texts, and the integration of various cultural theories provide intimate and authentic witnessing of personalized experiences that influence public perceptions of breast cancer differently than either ways of communicating could do separately.

Martha Hall’s artist’s books chronicle her experience with breast cancer and her receding life. Artist’s books are primarily anti-establishment works of conceptual art that use and deconstruct the form of the book, making art accessible to the wider community. Hall uses paper sculpturing, unusual binding structures, and various crafts to translate her illness experience into viewable and touchable objects that draw the ‘reader’ into a participatory experience. Artist’s books have an advantage over literary texts because the non-diagnostic participatory touch establishes a clear association between ill body and illness narrative and invites individualized ethical considerations.

The Chicano performance artist Guillermo Gómez-Peña challenges cultural perceptions of the ill body and represents his own experience with liver and infectious disease. His performances connect the individual experience with and within society, and, as a pedagogical strategy, widens the gaze from the isolated ill body to its network of (cross)-cultural practices. Gómez-Peña performs two perspectives: the culture-bound medical view of the body and the body’s view of culture-bound medicine.

Nick’s Film/Lightning over Water (1979) by Wim Wenders records the last few weeks of Wenders’ friend Nicholas Ray who is dying of lung cancer. The film portrays the messiness, helplessness, and failures that arise from exploiting someone’s dying experience artistically. The film form makes visible the very unspeakability of death, and chronicles a shared experience that effects an immediacy of experience and poses unanswered questions. Perhaps the most therapeutic aspect of this palliative project to all involved is that in chronicling his own dying, Nick’s legacy survives through the film.

The experimental and autobiographical theater “Well” (2004) by Lisa Kron is a relational narrative of Ann Kron and her mother regarding their different therapeutic approaches to chronic fatigue syndrome and allergies. Through a radical change in lifestyle, the daughter’s story leads to healing, while the mother opts for medical treatment, yet cannot escape her illness. The play prepares for a realistic clinical uncertainty that is not just determined by medical limitations but also by different individual responses to illnesses and treatments.

Finally, a set of six collaborative online animation films called Animated Minds (2003) each address a mental disorder. While he patient’s voice-over narrates his or her experience, there is a collaborative effort in animation, coloring, and music. This form of collaborative artistic expression is particularly striking, and much of what remains unspeakable in the written word becomes speakable in animation and therefore counteracts isolation and stigma. Fish on a Hook impressed me the most. The very respectful, empathic yet matter-of-fact voice-over draws the audience into an alternative world (or what Bolaki calls ‘alternative knowledges’) of a mental disorder (agoraphobia and panic attacks) that might otherwise remain inexplicable. If the strength of Wenders’ film lies in its immediacy of experience, the relative anonymities in Animated Minds (and in particular Fish on a Hook) succeeds in a kind of distancing that allows critical and unencumbered engagement. It enables different dialogues about lived experiences that also include fear, resistance, loss, helplessness and the social context that define these.

Bolaki’s examples reveal several commonalities. All of them display a complexity and authenticity of experience, and result in productive learning from disorderliness and failures of representation that challenge previous discourses of mastery. In these examples, we can see what we already know but often ignore: that no patient’s illness experience happens in a vacuum, or, perhaps even more importantly, within a medical bubble. The deconstruction of art forms through messiness and fragmentation are a ‘body speak’: they mirror the ill body’s deconstruction and disintegration. Moreover, the artistic forms are of great importance because they are related to questions of ethics and politics that explore the many ‘metastasised’ conflicts around illness. The communicative acts are tightly bound to the question of ‘how to live (or die)’ and especially how to be perceived rather than merely how to be healed.

Although it has become a truism that a patient is more than his/her body or illness, each project Bolaki selected for her book, strongly foregrounds the mind and creativity of the artist and presents the patient (perhaps for some uncomfortably so) as a complex, lively, and creative being. Although the artists and performers deal with death and disorders, they leave a legacy that lives on. Combined with collaboration and public access, the suffering artist-patients nevertheless generate projects that are giving, instructive, tangible, and inspirational, and succeed in blending artful expression and poignant meaning. Perhaps herein also lies the difference between the first wave of medical humanities and the second wave: the former engages in listening and proxy-experiences, while the latter engages in participation and witnessing. This seems to be a logical next step.

What then about those who remain silent, those who don’t want to tell their stories, or those who cannot identify with the narratives already told? To re-phrase Tolstoy, ‘All healthy people are alike; each ill person is ill in his or her own way.’ How can the medical humanities represent the silence that is probably inhabited by the clear majority of those suffering from illnesses? Bolaki’s Illness as Many Narratives importantly reminds us that the content of the narratives might not represent everyone’s experience, but that the need to communicate one’s suffering is universal.

A very minor criticism of the book is that Bolaki assumes familiarity with the chosen materials. Her analyses are comprehensive and convincing, but it would have been good to have a general introduction to each project under discussion. I also felt that her diligent defense of emergent narratives might be preaching to the converted in literary circles, especially since she clearly and convincingly works out what her emergent narratives can do better than other word-based narratives: they solicit dialogues and shape perceptions in a much more public and political way.

Throughout her book, Bolaki underscores—by way of aesthetic, ethical, pedagogical political, and collaborative methods (tools)—the notion of narrative as telling in many forms, forms that favour expressive and evocative representations rather than linear story-telling. The photography, artists’ books, performance art, film, theatre and animation Bolaki introduces in her book reject the ‘cultural narrative of triumph’ (64) and invite instead critical interloping and inter-disciplinary dialogue. Bolaki’s Illness as Many Narratives is an intelligent and illuminating contribution to the field. A short review like this can in no way do justice to the book’s sagacity and importance.