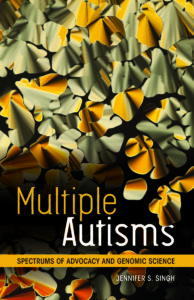 Jennifer S. Singh’s Multiple Autisms: Spectrums of Advocacy and Genomic Science weaves together several moving pieces surrounding autism research over the past 40+ years. Singh takes up histories of autism sciences, their multiple attendant discourses, the political, legislative and financial elements of this evolving research, and the distinct voices of researchers, scientists, individuals on the “autism spectrum” and their parents. Singh’s book is notable in its scope and its ability to represent that scope in five chapters.

Singh stakes a methodological balance early: a mix of historical and light ethnographic (primarily interview) methods, with more consequence given to the latter. Chapter 1 summarizes the early history of autism research–glossing figures like Leo Kanner and Hans Asperger–before turning to iterations of autism in the DSM. Though this history remains a touchstone throughout the text, a key conceptual turn comes with the introduction of Ian Hacking’s concepts of “looping effects” and “making up people” (Singh 29). Hacking provides the text’s central thrust: “In this case, autism is subject to the looping effects based on the way various parents, researchers, therapists, and physicians interact with a person diagnosed with autism. This type of interaction can in turn change or alter the classification.” Here, Singh foregrounds a tension between the scientific discourses that have historically attended autism and the on-the-ground, day-to-day experiences of autistics and their families. The book’s framework for this tension, emphasizing the multitude of players involved in the biotechnological and biosocial spheres of autism research, speaks to Singh’s dual intellectual trajectories: as a former researcher in the private biotechnology sector and an academic sociologist of science, Singh constructs a text that oscillates between these two spheres–the biotechnological and the biosocial–without losing sight of the interplay between them.

Chapter 2 opens in the realm of the social, overviewing the involvement of parents and their lay expertise in forwarding autism genetics research. Singh cites cases such as the National Alliance for Autism Research (NAAR) and the Autism Genome Project (AGP). The cooperation among these non-profits and governmental groups (i.e. the NIH) is presented by Singh almost as an illustration of resource mobilization (be it monetary or genetic resources, or scientific expertise) and the alignment of political and scientific opportunity. Singh describes a “collective mobilization” of, largely, parent-led groups and medical research organization to “engage in building epistemic infrastructures [. . . .] establishing multiple partnerships, developing and transforming various levels of expertise, and building a sense of community within the field of autism genetic science” (58). Such language aligns well with the sociological discourses of social action (for example, see McCarthy and Zald [1977], who apply economic language of “resources” to social movement activity). Moreover, Singh notes the mutually beneficial development of the publicly accessible AGP database. The AGP, in Singh’s telling, creates a positive research climate by running counter to standard scientific practice: its satellite projects promote sharing of data among researchers. As one of her interviewees notes, “Breakthroughs come whenever people talk to each other from different fields, and that’s just the way it happens, right?” (79).

For Singh, though, such a research climate and its robust network of players facilitates the development of potentially harmful epistemic infrastructures–both discursive and material structures–that don’t necessarily produce desired outcomes. Chapter 3 thus returns to the biotechnological scene and the discourses that attend shifts from genomic to genetic models of thought, the ultimate failure to isolate an “autism gene,” and the move toward potentially fraught genomic models. The AGP, Singh illustrates, quickened the scientific consensus that no “major common and heritable gene” is definitively associated with autism. The introduction of genomic, microarray technology creates new styles of thought for researchers concerned with the root causes of autism. Rather than seeking to identify a specific gene, Singh notes a turn in the twenty-first century toward a greater acceptance of “multiple autisms,” “the creation of new subgroups or categories of autism that have genetic and/or genomic similarity,” or similar “comorbid conditions not a part of the diagnosis” (106). Though chapter 3 is awash in technical discourse (perhaps a bit too much so for lay readers) Singh is sure to not lose sight of the social and symbolic implications of the genomic turn for concepts of risk and biological citizenship. “By linking the cause of autism to heritable genes,” she writes, “parents were freed from the guilt that they did something to cause their child’s autism. However, under genomic styles of thought, parents, especially mothers, are once again becoming implicated in the cause of their child’s autism” (119). Here we get insight to the broad conceptual value of Singh’s text: in the middle of a sprawling study of the influencers of scientific research into autism is a move toward closing the conceptual gap between the research community and the larger biosocial public.

Concepts of biosociality and biological citizenship become increasingly consequential to the book later on. In chapter 4, Singh illustrates biological citizenship within the autism community (via Adriana Petryna and Nikolas Rose) as concerning enacted claims of individuals that merge medical and lay knowledge as well as economic disenfranchisement that could hinder access to the materials necessary to enact these claims (127). Such structural hindrances become a key component of chapter 4, particularly as Singh demonstrates that parents are more likely to submit to genetic tests if they could receive a diagnosis that allows access to social and medical services (147). Singh places biological citizenship as a question of doing what is necessary not only for one’s child but to future generations as well. At its core, this vision of biological citizenship underlies much of Singh’s history of autism genetic and genomic research.

If chapters 1-4 present a largely–though not completely–positive view of advances in and around autism, chapter 5 provides a bit of a counterpoint. In her interviews with adults on the spectrum, Singh notes that “a major financial and scientific focus of autism research has been genetic and genomics science, with little attention to other forms of knowledge that might be more beneficial to people living with autism” (153). Singh leaves implicit, I believe, what readers in the humanities would readily note: the voices present at the founding of major scientific initiatives to address autism as hereditary have largely negated the voices of those with autism. In doing so, the growing emphasis on genetic and genomic research has solidified an epistemological and discursive field of research that frames genetic testing as worthwhile only “if there was a targeted medication that could alleviate exactly the symptoms of Asperger’s they wanted to erase” (168).

The book’s closing is tentatively optimistic, leaning heavily on self-advocacy and new, empowering citizenship claims being carved out by adults with autism; yet Singh also notes, perhaps ominously, that current genetic and genomic frames of autism research are predominant and highly profitable. Thus, readers of Singh’s book are left with urgent questions. How do we to ensure all voices, particularly patient or subject voices, are heard as interests converge around medical projects, particularly those concerned with genetics and genomics? And what are the foreseeable limits of these sciences, not just bioethically but biosocially?

Such lingering questions do not suggest the text is at all lacking, but testify to the range of uses Multiple Autisms could take on. Though there is a noticeable brevity granted to two moments in the book–the material impediments toward biocitizenship in chapter 4 and the entire fifth chapter, where the voices of autism are finally foregrounded–such short treatment could conceivably be taken as a productive move, granting Multiple Autisms a fruitful open-endedness, or at least a testament to the lacking presence of patient voices in medical research broadly.

Scholars of medical sociology, rhetoric, and broader medical humanities alike would benefit greatly from Singh’s text. Issues of biocitizenship and medical(ized) communities remain central, at times evoked in ways that challenge predominant views of both. The question of genetics and biosociality–the potential impact on communities building around illness when genetic and then genomic turns are made–presents ripe ground for further research. Such questions could align nicely, for example, with Diane Price Herndl’s work on BRCA risk. Further, Singh’s placement of “risk” in the text, as she notes rightly that “risk” rarely shows up in discourses of lived experiences of autism (163), troubles notions of “biocitizenship” as discussed by scholars like Herndl and J. Blake Scott. In short, though it is primarily a snapshot of a specific biotechnological and biosocial moment, Singh’s book extends to major contemporary concerns about community, ethics, genetics, diagnostics, and more. Now, as biological sciences advance in areas of genomics–and as the popularity of genetic and genomic databases among researchers surely grows–Multiple Autisms will prove to provide important early insights into how these changes matter for those perennially on the receiving end of these multiplying and complex diagnoses.