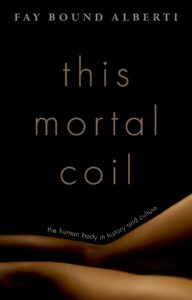 We all have stories to tell about our bodies. They are, as Fay Bound Alberti writes, ‘the inescapable material reality we live with and in.’ In today’s scientific and medical world, however, our bodies are often viewed as a series of parts to be examined rather than an interconnected whole. In This Mortal Coil, Alberti explores the history of how and why we came to see our bodies as an assemblage of parts to be scrutinised, assessed and treated. Reading this book, I was reminded of my own story of how I came to be diagnosed with a large, benign tumour on my pituitary gland. I spent over two years seeking treatment from my GP and optician for what seemed to me to be a variety of unconnected symptoms. Finally, during an emergency visit to hospital when my eyesight failed, one doctor asked me to describe everything I could remember about changes in my life and body in recent years. It was only when I recounted my seemingly disparate symptoms of gaining weight, frequent headaches, feeling anxious, irregular periods and failing eyesight as one narrative story that the doctors were able to make a diagnosis. Such a holistic approach is all too rare in the context of today’s highly specialised, and often under-resourced, medical services, however. As Alberti highlights, ‘Today’s government funding, research, building, and personnel resources form separate systems to deal with mental health (psychiatry and psychology), the heart (cardiology), the brain (neuroscience), the skin (dermatology), the gut (gastroenterology), and so on.’

In This Mortal Coil, Alberti features a series of historical case studies to examine how we came to view the body, and its ailments and injuries, in this compartmentalised way. She starts with the moving story of her teenage daughter Millie’s diagnosis with scoliosis, a severe curvature of the spine, which has caused her great discomfort and pain. Millie has had to endure endless surgery to try to straighten her spine, including the insertion of metal rods into her back, causing Alberti to ask, ‘At what point do the rods and screws become part of her “real” body?’ Millie’s spine was treated as a discrete object to be assessed and treated, disconnected from her emotions about her spine and her anxieties about her body image. Millie’s story foregrounds some of the major themes of the book – the separation between the body and the mind, and the ruptures between our sense of self and our bodily organs. As Alberti writes, ‘In modern health care our ability to treat the spine as a part we can repair, like the heart, like a limb, necessarily displaces our “self” from the body part in question.’

In the ensuing chapters, Alberti takes us on a fascinating voyage through the body and its parts examining the history of the skeleton, heart, brain and stomach, and the less charted territory of the breasts and genitals, the skin and the tongue. In each case, Alberti shows how changes in medical knowledge, and in the language and metaphors we use to explain and describe our bodies, have transformed the way we have experienced, lived within and felt about our bodies. This journey takes us through political, medical and philosophical developments that transformed our understanding of the body as being controlled by the balance of the four humours, to the brain-centred understanding we have of the body today. Moreover, these changes in the conceptualisation of the body and its organs have always been inflected with historically-specific gendered and racialized assumptions about human behaviour and emotions. Taking an explicitly feminist perspective throughout, Alberti explores how differences between the sexes were naturalised and encoded in scientific and medical texts. She looks, for example, at how the bones the bones were gendered by the scientific classifications of the structure and shape of the male and female skeleton. The assumption that women will have smaller skeletons, developed in the 18th and 19th centuries, has meant that even today physically large women, or conversely physically small men, have not been recognised in archaeological surveys of human remains.

Such gendered explanations come to the fore in the chapters where Alberti focuses on the history of female bodies, and how scientific and medical ideas about female and male bodies have naturalised inequality between men and women. I found the chapters on the history of the breast and female sexual organs to be some of the most compelling and original in the book. In her chapter on female genitalia, for example, Alberti traces the often overlooked history of the vagina, the vulva, the hymen and the clitoris. She shows how the vagina has often been viewed and represented, in both medical and cultural texts, by the absence of a penis, a ‘no thing’, as it is described in the slang Shakespeare deploys in Hamlet. Even today, Alberti argues, dictionary definitions seldom describe the vagina as a sexual organ in and of itself, but rather as a canal or a passage, leading to elsewhere – its purpose presumably to gratify the male penetrator. Female sexual organs have historically been very sketchily represented in medical textbooks. This is particularly the case with the clitoris, the one human organ designed solely to provide pleasure, which remains the most under-researched and under-represented organ of the female body. As Alberti writes, the clitoris ‘symbolises historically persistent fears about female sexuality: disorderly, uncontrollable, and independent, a force for agency above and beyond its medico-scientific and social framework’. In contrast, the far less biologically complex flap of skin in the vagina, the hymen, has been invested with undue medical and cultural significance, repeatedly referred to as literal and figurative ‘evidence’ of a woman’s virginity and purity.

Alberti also traces how absence of body hair has come to be seen as an ideal of feminine beauty in Westernised societies. How did we get to a place, Alberti asks, ‘where the almost complete removal of public hair, a process that is painful, inconvenient, expensive, and repetitive, is not only fashionable but also the idealised “norm”, female body hair being seen, at least in most of Europe and the United States as unattractive, unfeminine, and even dirty?’ Here she pinpoints how excessive body hair on women became pathologized in the 19th century, particularly with the development of evolutionary theory whereby excessive body hair became associated with being animal-like and primitive. In the case of Julia Patrana, a black woman with excessive body hair who was exhibited across Europe in a touring ‘human zoo’ in the 1850s and 1860s, we see how gendered and racialized prejudices intersected in medical and popular representations about the black, female body.

Alberti even devotes a chapter to the gendered history of the tongue, exploring how the tongue has been a powerful metaphor confirming women as lesser beings than men. If I had previously considered the tongue as a biological entity, it had been as a rather innocuous organ that enabled us to speak and communicate. Although technically the tongue is sexless and without individual agency, Alberti argues that its history is ‘rife with social, sexual, psychological, linguistic, and physiological significance.’ The tongue, like all organs of the body, cannot be separated by the gendered linguistic metaphors that have been used to describe it. Female tongues have historically been seen as untrustworthy and as a threat to social order. In early modern Britain, the 17th and 18th centuries, for example, women were frequently characterised as having ‘vexatious’, ‘sharp’ or ‘scolding’ tongues – as illustrated by the character of Katherine, the ‘nag’ in Shakespeare’s Taming of the Shrew. By the 18th century, women’s tongues were said to drive men to violence, and an ‘evil tongue’ was enough to exonerate a man from beating, and even murdering, his wife. Cruel punishments were devised to keep women’s tongues under control – including the ‘scold’s bridle’, a metal contraption that was strapped to the woman’s head to prevent her from speaking.

Although Alberti analyses the organs of the body in separate chapters, she skilfully subverts the view of the body as an assemblage of disparate parts. By taking the body apart, she writes, we might even be able to reconstruct it anew. She concludes the book with a call for a holistic approach to the body and its ailments, one that views the body as more than the sum of its parts. My fear is that this holistic approach is out of sync with the current direction of medical thought and practice in a neoliberal capitalist economy, where medical research and treatment is dominated by competing specialisms and by giant pharmaceutical companies, which seem to be ever more voraciously targeting their wares on specific bodily organs and diseases in the race to maximise profits. As Alberti remarks in her conclusion, although the body represents the limits of our sense of self, the skin marking the boundary between ourselves and the world, we are not self-contained beings, separate from the social and political environments we inhabit. Rather, writes Alberti, we are ‘social beings that communicate with others – not only through tongues as symbols and organs, but through social practices, behaviours and our very materiality.’  It would be interesting to explore further the ways in which social structures and practices, such as the dominance of work in our daily lives and constraints on time and leisure, have altered our bodies and the way we think, feel and talk about them.

In This Mortal Coil, Alberti has provided a compelling history, which explores the relationship between the biological body, with its bones, skin, guts and genitals, and the language and metaphors we use to describe it, without reducing one to the other. Written accessibly, and in beautiful prose, this book will appeal to historians, social scientists, medical professionals and the general reader alike. Highly recommended.

Hazel Croft is an associate research fellow at Birkbeck College, University of London