Tired all the time? 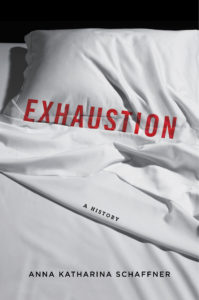 In 2015 in Newcastle-upon-Tyne, a new specialist NHS clinic was launched to deal with what seems to be an increasingly common British malady.[1] Among the most frequent presentations in GP’s surgeries, the health service has even introduced an acronym – TATT – to denote the problem of being Tired All The Time.[2] Surely in our accelerated age of global technocapitalism, with its constant demands on our attention, our energy, and our desires, we are more exhausted than we have ever been. Political and economic insecurity, and the threat of environmental catastrophe, mean that we live in a state of permanent precarity and ambient anxiety, while new information and communication technologies are blurring traditional lines between work and leisure and turning us all into 24/7 worker-consumers. In fact, argues Anna Katharina Schaffner in Exhaustion: A History, we are far from alone in seeing ours as the most exhausted age. Societies throughout history, from the classical period to the present day, have been quick to diagnose their period as uniquely enervating.

Schaffner’s book, the first historical monograph on the subject, examines understandings of exhaustion in the Western world across a period of over two millennia, from classical antiquity to the present day. The structure is both thematic and chronological, with each chapter considering a key concept around which understandings of fatigue have been structured in successive historical periods (‘Sin’, ‘Saturn’, and ‘Sexuality’, for example, providing three consecutive chapter headings). Schaffner develops what is essentially a continuity thesis. Contrary to those who would paint exhaustion as a particularly modern obsession, she argues, concerns about the relationships between human energy and human civilisation have been a consistent preoccupation of societies stretching back to Ancient Greece.

Exhaustion, Schaffner observes, has typically been understood not only as a physical, mental or spiritual state, but as a broader cultural problem. Physical symptoms such as fatigue, lassitude, and weakness, and their emotional counterparts of weariness, disillusionment, and apathy, have been matched on the cultural side by concerns with decline, decadence, and degeneration. With a background in comparative literature, Schaffner is at her most compelling in her analysis of language and in the wide-ranging discussions of literary texts (or films) which accompany each chapter. Analogy and imagery, she argues, have been unusually central to the science of exhaustion, structuring not only medical conceptualisations, but experiences of patients and forms of treatment. While scientific definitions of energy and fatigue have remained elusive, rich languages of metaphor have developed linking body and mind, culture and society.

From Galen to Freud and beyond, Schaffner argues, medical writing on exhaustion has been characterised by an ambivalent relationship to modernity. Fatigue diagnoses have often been used to pathologise social, cultural and technological changes deemed problematic by their originators. The American physician George M. Beard, who popularised the diagnosis of neurasthenia in the nineteenth century, famously listed ‘steam power, the periodical press, the telegraph, the sciences, and the mental activity of women’ (92) as the chief reasons for an epidemic of fatigue, while in the twentieth and twenty-first centuries, the decline of traditional social structures and the rise of a new self-involved individualism have been called upon to explain the rise in syndromes such as ME or chronic fatigue syndrome (CFS), pejoratively referred to in the press as ‘yuppie flu’ or ‘lazy cow syndrome’ (184). While arguments about the exhausting tendency of our society are often found in left critiques of capitalism and globalisation, Schaffner argues, the structure of the argument is typically conservative, relying on the imaginary evocation of some prelapsarian age of nature, tradition, stability, and rest, which is supposed to have been disrupted or corrupted by modern developments.

Schaffner’s ambitious time-span allows her to make a number of illuminating comparisons between periods not usually studied together. While the material covered in individual chapters will mostly not be new to medical historians of each period, there is a lot to be gained from taking the broad and comparative perspective that Schaffner attempts. Such an approach, however, is not without its problems. As with other recent historical works which have sought to examine the career of certain medical phenomena through time – for example, pain, depression, or psychosomatic illness – there is an important ontological question that requires addressing. How can we be sure, in comparing or concatenating concepts and diagnoses separated by time, place, and language, that we are really writing the history of a single thing or idea? Once we decide upon our object, we run the risk of finding it wherever we choose to look, imposing present-day concepts onto periods in which they are unfamiliar or inappropriate.

While Schaffner is alert to shifts in language, meaning and diagnosis over time, she nonetheless asserts a universal significance to exhaustion as a concept which dramatizes ‘our darkest primordial fears’ as human beings (13). While the particular metaphors and ideas marshalled to understand exhaustion are historically specific, she argues, there are nonetheless ‘transhistorical psychological factors that determine an ongoing interest in the phenomenon’ (12). Such psychological universalism will be controversial among historians of the human sciences, many of whom would argue that human psychology is itself the product of social and historical shaping. Historians of medicine will also question the analytical utility of Schaffner’s penchant for retrospective diagnosis of historical (or literary) characters, and of her at times uncritical “translation” of extinct medical classifications into present-day terminology. Can we really describe the classical theory of the humours, for example, as ‘proto-biochemical’ (21), or the behaviour of Jason in the Argonautica as ‘characteristic of manic or bipolar depression’ (28)?

Schaffner’s argument leads her to emphasise continuity over change in her narrative. While each chapter records the emergence of new historically- and culturally-specific conceptions of exhaustion, the mechanisms of change and divergence are undertheorised. Despite engaging with an impressive breadth of primary material, the chronological and geographical reach of her study means that Schaffner is necessarily forced to rely on secondary literature to contextualise her sources. The result is a book which, while perceptive and often original in dealing with individual texts, is set within a somewhat conventional view of the history of medicine as a succession of explanatory paradigms. It will be up to other historians to see how Schaffner’s broad arguments can be complicated and refined by case studies more circumscribed in place and time.

Exhaustion is very much a history ‘from above’. The story of fatigue is told through the writings of doctors and intellectuals, with the medical orthodoxy of each historical period typically characterised through the ideas of one or two canonical figures. Only in the later chapters (addressing the twentieth and twenty-first centuries) is there any sustained discussion of exhaustion as subjective or lived experience. Likewise, as Schaffner admits, the forms of pathological exhaustion studied in this book are near-exclusively associated with the middle and upper classes. Proletarian forms of exhaustion – for example the “industrial fatigue” which exercised governments and employers in Europe and America in the first half of the twentieth century – are near-absent. Working-class exhaustion is worthy of its own history, as are the important and consequential contributions made to the medical science of fatigue in the pursuit of industrial efficiency. Here again, it can be hoped that Schaffner’s intervention will act as a stimulus to further study.

Overall, Exhaustion is a timely contribution to a neglected area of study, situating present-day concerns about technology and progress, work and leisure, and the body and society within a long history of medical and cultural writing. Schaffner is throughout engaged with contemporary debates, leaping deftly from Hippocrates to Occupy, or from Proust to Piketty, with a clarity of expression and ease of style that will make Exhaustion attractive – and accessible – to a wider readership. In her epilogue, Schaffner brings the concept of exhaustion to bear on the question of climate change –  a problem, she argues, that unlike other worries about exhaustion, is unique to our own historical moment. Fears about the depletion of the planet’s limited resources of energy and materials mean that we are forced to confront the problem of exhaustion not just at the level of mind, body, or society, but as a threat to our environment and our existence. While all societies have been preoccupied with exhaustion, Schaffner concludes, it is only in the present day that it has become an issue of genuinely apocalyptic significance.

Steffan Blayney is a PhD student at Birkbeck, University of London. Twitter @SteffanBlayney.