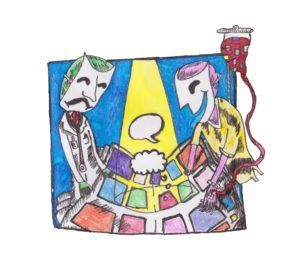 The 7th International Comics & Medicine Conference took place in Dundee, Scotland, from July 7 to 9, 2016. It was (as ever) a superb event: inclusive, humane, intellectually stimulating, and creatively inspiring.

The field known as “graphic medicine”, a term coined by medical doctor, comics creator, and scholar Ian Williams, explores “the intersection of the medium of comics and the discourse of healthcare” (1). It’s a diverse field, ranging from the study of graphic memoirs and novels of illness and caregiving, to the creation of comics in medical training as a means of reflective practice, to the use of comics as an accessible means of communication in patient education and public health, and beyond. Each year since 2010, the Comics & Medicine conference has brought together a community of comics artists, patients, healthcare professionals, academics, caregivers, and others, to present work in progress, case studies, and scholarly analyses. In its mix of perspectives from clinical medicine, literature, anthropology, visual art, public health, media studies, education, psychotherapy, and many other disciplines, graphic medicine makes an exciting contribution to the domain of medical humanities.

The theme of this year’s conference, “Stages & Pages,” called attention to the performative aspects of both comics and healthcare. The comics page is like a theatrical stage; through the narratives enacted in that space, we can explore and question the roles assigned by illness, such as patient, caregiver, healthcare professional, survivor.

In keeping with this theme, the conference kicked off with an evening of actual performance. After warm, humorous welcomes from the Lord Provost and the Director of the Scottish Centre for Comics Studies, comics artists took the stage and performed their work, reading aloud or speaking to accompany a slideshow of images. This DeeCap (Dundee Comics Art Performance) event was both funny and deeply moving—a reflection of the power of comics to speak with incisive humour about life-and-death issues. Elizabeth Shefrin, for example, read aloud from her hand-embroidered comic about her husband Bob’s prostate cancer, accompanied by Bob himself on guitar, and enacted scenes from their relationship using puppets; the performance faded out on the suggestion of x-rated puppet activity. Animation student Jules Valera donned a space helmet during her reading, to enact the experience of “spacing out” during a mental health crisis. Dana Walrath, author of Aliceheimer’s: Alzheimer’s Through the Looking Glass (2016), about caring for her mother with dementia, punctuated her performance with impressive a cappella singing and hilarious impressions. “Laughter is a respite,” Walrath said. “It opens up new possibilities for ways to cope.”

The plenary sessions at the Comics & Medicine conferences traditionally feature a mix of comics creators and comics scholars, and this was the case in Dundee as well. Elisabeth el Refaie, the first keynote, offered a reading of spatial orientation in Ellen Forney’s graphic memoir Marbles: Mania, Depression, Michelangelo, & Me (2012), drawing on conceptual metaphor theory and the semiotics of theatre to analyse the meanings of horizontal and vertical patterning in Forney’s page layouts. It was a fascinating, scholarly demonstration of how the visual language of comics embeds narrative meanings beyond what can be achieved in text alone. Veteran comics artist Al Davison in his keynote presentation later the same day, by contrast, gave a deeply personal talk, tracing the influence of his severe spina bifida, childhood trauma and abuse, and additional health challenges, on his artistic vision and technique. Davison is the author of The Spiral Cage (2003), a graphic memoir, and numerous other books. Comics creator, educator, and force of nature Lynda Barry, who delivered the final talk of the meeting, combined the theoretical and the personal, describing her own work and her teaching approach based on the central place of the IMAGE in thought and experience. A powerful metaphor emerged from Barry’s description of V.S. Ramachandran’s mirror therapy for phantom limb pain: using a mirror-box, a patient sees the reflection of their intact limb in the place of the amputated limb, and is thus able to unclench what they experience as a painful fist. This is what images do, according to Barry: they allow us to “unclench painful things in our lives.” With her colleague Dan Chaon, Barry also gave two intense workshops in visual storytelling during the conference.

Concurrent sessions were a similar and intoxicating blend of the theoretical and the deeply personal. “Moving Stories,” a panel I was privileged to chair, consisted of ten short presentations of completed comics work and work-in-progress, by turns political, critical, humorous, and gut-wrenching. “Comics as Medical Education,” on the other hand, presented valuable case-studies on the use of comics as teaching tools in medical and patient education. Other concurrents were interactive, such as “Diary Comics & the Diary in Comics,” which had participants experiment with the diary mode as a way to slow down and reflect on experience.

If I were a superhero, my chosen superpowers this month would have been to attend ALL of the concurrent sessions at this jam-packed meeting, and to give due credit by name to each of the speakers who presented. The sessions I attended were, without exception, inspiring and thought-provoking; at the same time (literally), the sessions I had to miss were just as rich, judging from the enthusiastic comments from other attendees during the social breaks. The conference programme, with information about all presenters, is available at http://www.graphicmedicine.org/graphic-medicine-2016-conference-stages-pages/.

From the first Comics & Medicine conference I attended, in Chicago in 2011, I’ve been in love with the profoundly democratic ethos of the meeting. Artists, patients, academics, and healthcare providers (not mutually exclusive categories) meet on an equal footing. Everyone learns something; everyone has something to teach. Presenters and attendees share a remarkable openness and willingness to be vulnerable, while bringing an acute critical gaze to the ways that visual narrative enriches and illuminates illness and care. It’s truly an object lesson in humane, engaged scholarship, creativity, and collaboration.

Congratulations and thanks to Andrew Godfrey, this year’s on-the-ground organiser, for bringing this meeting together. Godfrey is a comics creator, graduate of the University of Dundee’s MLitt Comics Studies program, and current PhD student in English at that institution; his own research focuses on the links between graphic medicine and performance, while his comics chronicle and reflect on his experience of living with cystic fibrosis. Special kudos to him for scheduling the warm, sunny, spectacular Scottish weather.