And so it goes…this thing called life 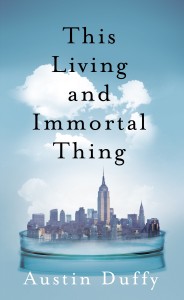 This Living and Immortal Thing

If authors write what they know, then Austin Duffy knows a lot, but This Living and Immortal Thing, his first novel, blends experience with fiction and offers more than informed opinion and insight to medicine, science, life and death. This is a story. The story teller is an Irish doctor who has left a childless, stagnant marriage to specialise at a famous cancer centre, recognisable as Memorial Sloan Kettering in Manhattan. As a post-doctoral trainee, he is comparatively mature in his mid-forties, and contemplates life and events in his new surroundings. Thinking of his younger brother Donal back in Ireland, he notices that America differs from home in having relatively few cases of Down’s syndrome. “They would not have allowed him to be born…with their blood tests and ultrasounds and amniocentesis needles…” His brooding juxtaposes several contrasting images: the bustle of the city ignoring a lone street protestor; the urgency of the clinic versus the controlled environment of the research laboratory; and a bored, hung-over clown employed to entertain sick children, bald from chemotherapy, reminds us that for the hospital staff illness is routine, but for the patients it is crisis.

At first, there is a trace of glibness in the narrator’s clichés but these are progressively replaced by more heartfelt prose that unfolds like a diary. His jadedness is jolted by the freshness and allure of Marya, a young Russian immigrant who volunteers as a translator in the hospital. Their dialogue is clipped, droll and loaded with sexual energy. She uses irreverent and refreshingly direct language. “So what sort of doctor are you anyway?” “You’re like, what…forty five? Are you homosexual?” He reveals his story with typical Irish reserve. But this is no ordinary flirtation; she has a secret. She seems hurried and doesn’t bother with his name – ‘post-doc’ will do. Post-doc is both intrigued and attracted, and his scientific mind repeatedly notes that men are seldom distracted from sex for long, regardless of the context.

“…doctors, they’re so stupid!” exclaims Marya, frustrated after witnessing a tactless communication of bad news to a patient. “I don’t translate word for word but only some….”  Silently, post-doc reflects how difficult it is to explain things properly though a translator but also easier because one is removed and less responsible for one’s words. He likens it to a high altitude bomber out of range from the sights and sound of the horror inflicted below. He is dispassionate about his experiences with terminally ill patients: “For the most part,” he says, “there is nothing to do except sit across from them and be kind.” In a commentary on communication, the eminent medical scientist Robert Brook once defined a physician by the following equation: physician = emotion + passion + science. Post-doc surely has emotion and recently switched from clinical to laboratory science, but may have lost his passion.

While grieving the physical and emotional distance from his own potential progeny, his care for the experimental animals is tender and touching, with each identified by name. He is opinionated about what it takes to be a good scientist, and is respectful but deeply critical of his supervisor Dr. Solter. Like all good scientists, post-doc is attentive to detail, painstakingly recording his observations, with a measure of humorous humility when Henrietta, his favourite mouse, is pronounced to be male by the visiting vet.  On the sole occasion when post-doc says something kind about Dr. Solter, it is to concede how well Solter communicates with the next of kin of a terminally ill patient. Curiously, he doesn’t seem very excited about the promise or impact of his own research; he bores a group of students when he is called to explain his project. Perhaps this is disillusionment or perhaps it is the key point: the scientific method is slow and repetitive and gives the lie to the popular misconception that science is fun.

There is, of course, no mystery about where the story will go, but this doesn’t detract from the parallels between the laboratory mice and the patients, the cancer cells and the frozen embryos from post-doc’s marriage, and a vigorous new cell line from a once vibrant donor. Along the way, the story is speckled with informed commentary on topics ranging from cancer to clinical arrogance. Some of post-doc’s asides are authoritative, like those on the poetry of W.B. Yeats and the music of Brazil. Others are enigmatic: “There comes a time when all there is to do is worry” and “Illness makes for an oddly insubstantive discussion,” whereas other pronouncements are quirky: “Generally you are better off when things are not resolved at all. You only have to ask any one of my previous patients that. It is rarely in your interests.”

If this is a book about cancer, then it is also about life, death, loss and replacement, and a book about medicine. With each, there is uncertainty. Medicine is the art and science of managing uncertainty. Post-doc has moved from the clinic to the research laboratory where it is “more controlled and predictable…in contrast to clinical work, where you have only an illusory or – at best – superficial control over things.” When questioned by Marya, he is vague on the reason for his change: “Humans are tricky, I suppose… Unpredictable.” In the research laboratory: “You set your own conditions and, to a large extent, the future is predetermined.” Is this self-serving? Is post-doc a reliable narrator? Later, he claims: “Given the choice I would take uncertainty over certainty every time.” He believes that a true scientist’s mind should move slowly and should “question everything.” He is critical of people like Solter whom he believes “has too much certainty” to be a natural scientist and whose mind is “moving too quickly for science…” Since childhood, post-doc has had a searching mind and was described by his school teacher as “a fan of distraction.” Now, he wants to slow things down in his life, to focus and to cope with the passing of time, and this, in his view, is as good a reason as any for going into the laboratory, where he can focus on the continual cycle of life, death and replacement.

This is a book that I expected not to like, much of it too familiar to me. Now, I miss the accented penetrating language of Marya and the distractions of post-doc.