Reviewed by Dr Paul Dakin, GP Trainer in North London with research interest in the representation of d/Deaf people 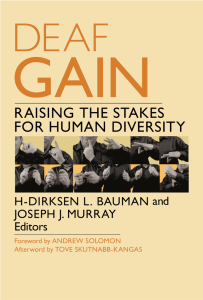 This book challenges the commonly held notion that deafness is an existence marked primarily by loss of hearing and a condition that needs to be treated or corrected. Deaf Gain proposes an alternative in which deafness is seen as an evolutionary divergence carrying specific advantages for both non-hearing and hearing communities. Claiming that “Deaf Gain can change the ways in which we appreciate the gifts of all humans” (xxxii), the book argues for a shift in the dominant hearing world view from a perception of what is missing towards a positive recognition of the contributions and advances derived from the experiences of Deaf individuals and Deaf culture.

The basic concept of Deaf Gain was originally formulated in a series of presentations organised by two of the editors, Baumann and Murray, in 2009. These presentations took place at Gallaudet, the world’s only Deaf University, situated in Washington DC.

The 500 page volume was generated out of the resulting discussions and seminars and represents the work of 45 authors mainly based at Gallaudet. The 27 chapters that constitute Deaf Gain are not too long, and are on the whole easy to read, informative, and well researched. The book is arranged in sections that consider applications of the underlying concept around specific themes such as philosophical, language, sensory, social and creative.

The overwhelming approach is positive, optimistic, and even heroic. The concept of Deaf Gain turns on its head the usual idea that deafness should be defined through narratives of suffering and isolation. “The Deaf community has gone to great efforts to deabnormalize deafness. To combat the abnormalizing notion of seclusion due to deafness, we get Deaf cultures. To combat the abnormalizing characterisation of deafness as hearing loss, we get Deaf Gain” (p33).

This may well be true for a minority of people who are non-hearing. The book is written mainly, though not exclusively, from the perspective of the American Deaf Community, most of whom would be deafened at or near birth, and whose first language would be American Sign Language (ASL). Their experience would resonate with other signing communities, such as British Sign Language (BSL) in the UK, although it is not as large, active, or vocal as its counterpart in the USA.

But it should be remembered that the vast majority of individuals who experience deafness are not born Deaf or become deafened at a young age. They actually lose hearing in later life, perceive their experience in terms of communication difficulties with the majority community to which they have always belonged, often feel isolated, and would most certainly characterise deafness as a process of loss.

Claims are made early on concerning the evolutionary advantages of deafness on the basis of the persistence of the deaf gene. Again this is less likely to apply to the majority of people who become deafened later in life. I’m not convinced that just because a gene persists this inevitably means it has enhanced evolutionary potential. For instance, the cystic fibrosis gene is not rare, but its evolutionary rewards, if any, remain unclear. Parallels are also made between the advantages of deafness and those of bipolar disease and Huntington’s chorea, a suggestion that seems rather self-defeating, as I have never come across individuals with these conditions who celebrate such devastating diseases.

Other potential benefits of deafness are more readily and obviously explained. Evidence is given to show that Deaf people have better visual acuity, pay more attention to facial features and to peripheral vision, enjoy greater manual dexterity and enhanced tactile senses, and have improved spatial memory compared to their hearing counterparts. It could be argued that this is not a genetic facility at all but an increased functionality due to loss – an example of when one sense is absent, the brain develops others to compensate. People who have severe visual impairment are traditionally believed to have developed greater abilities to hear and to sense movement, and to even display ‘second sight’. Many people have folk beliefs about the loss of sight leading to enhancement of other senses or even ‘supernatural’ ones. This ‘benefit’ or ‘privilege’ isn’t conferred to those who have lost their hearing but perhaps should be.

An appeal is made to historical records showing how much deafness and Deaf people have contributed to our understanding of the development of language and have pushed forward inventions such as Morse code and the telephone. Deaf people are revealed to be quick learners and good employees, with large companies such as Firestone and Goodyear actively recruiting staff from within the Deaf community. Instances are given of societies around the world in which both hearing and non-hearing people use sign language, with a resulting increase in social cohesion.

The information presented from neuroanatomical studies is fascinating. There is evidence for the gestural origin of language. When children acquire language, spoken or signed, they do so in a similar way. The brain learns communication using similar processes regardless of whether it is visual or auditory, although the right hemisphere is more active with signing. Teaching a hearing baby simple signing conveys advantages in visual processing, language acquisition, vocabulary, and reading.

Creative gains include the notion of Deaf Space in which architecture takes ‘possession of space’ for Deaf people by emphasising vision and touch as the primary means of spatial awareness and orientation. These benefits are available for all, and include emphasis upon exciting features such as building around a common collective space, an emphasis on the placement of light and mirrors, and soft intersections that have destination points within immediate view.

In summary, the book proposes that the world as a whole benefits from the attributes, abilities, perspectives and contributions that arise from deafness, Deaf individuals, and Deaf culture. The concept of Deaf Gain promotes deafness as a positive for the entire community, hearing and non-hearing, not as a genetic or disease abnormality but as “a biological variety in the human race, like skin color or gender” (p287).

I enjoyed reading Deaf Gain, and recommend it as a resource. Although I have reservations about some of its assertions, it catalogues a wide body of evidence and presents well-argued opinion. It is an excellent addition to the understanding of deafness and to the promotion of Deaf culture.