The Past: a Friend or Foe? Different Perspectives from ‘Spectre’ and ‘45 years’.

In the words of the French philosopher Henri Bergson: ‘The pure present is an ungraspable advance of the past devouring the future. In truth, all sensation is already memory’. In this view the present, as we usually think of it, is virtually non-existent as the past connects directly with the future. Two recent, but very different films, ‘Spectre’ and ‘45 years’ provide thought-provoking insights into this relationship.

From the opening scene in ‘Spectre’, the 24th official episode of the James Bond saga, the audience are reminded that the past that does not actually pass, using a clear signpost (The Dead are Alive) and an action sequence celebrating the Day of the Dead in Mexico City. The past keeps coming back as James Bond (Daniel Craig) receives video instructions for his current mission from M (Judy Dench), who died in the preceding episode (Skyfall, Sam Mendes, 2012). The film then continues amidst the usual apocalyptic adventures intermingled with continuous references to the past including literature (Bond-girl is called Madeleine Swann, a nod to Marcel Proust’s ‘In Search of Lost Time’) and previous Bond films such as the final train trip (‘From Russia with love’, 1963), and Franz Oberhauser’s (Christoph Waltz) hideaway (‘Dr. No’, 1962). 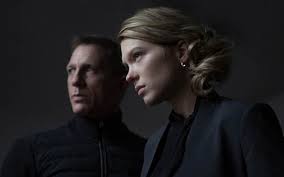 Director Sam Mendes, as in ‘Skyfall’, clearly favors the past, filmed in warm colours, over the present (or future) filmed mostly in a cold gray-blue.

‘45 years’ tells the story of the Mercers, Kate (Charlotte Rampling) and Geoff (Tom Courtenay), in the week preceding their 45th wedding anniversary party. The initial shot (Kate walks the dog early morning in the countryside) is repeatedly shown during the film, to emphasize that nothing changes in the quiet, repetitiveand probably boring life of this old couple. But something does happen: one morning Geoff receives a letter from Switzerland announcing the recovery of the corpse of his x-fiancée, Katya, who had fallen in a crevasse in 1962 while hiking with him in the mountains. 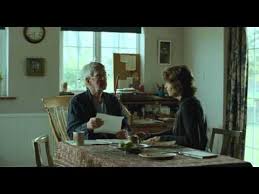 Geoff and Kate read the letter about finding Katya’s corpse.

From that morning onwards, Kate becomes entangled in a vicious cycle of anger towards her husband. The zenith of their conflict comes in a moving scene when she finds out from old pictures that Katya was pregnant. At their wedding anniversary party, Geoff remains unaware of his wife’s uneasiness while dancing to the music of ‘Smoke gets in your eyes’ symbolizing their marital life.

What is the past then: a rich source of inspiration as seen in ‘Spectre’, or a dark place from which monsters arise as seen in ‘45 years’? There is no easy answer to this question. We know that the past sometimes should be remembered, such as the horrifying wars and conflicts of the 20th century, so we do not repeat them. However on other occasions, the past is best forgotten, such as the hatred due to nationalism or religion seen in the Yugoslav wars (1991-2001), and in the case of Catholics vs Protestants in Ireland and Jews vs Muslims in the Middle East. But while we can sometimes rehearse our short term memories and store them in distant long term memory stores, at other times we cannot voluntarily decide to forget. Familial, cultural, religious, emotional, or political factors may enhance or twist the memory of a traumatic/life-changing event. The fallibility of memory is specifically relevant when memories are used as evidence in the courtroom. In this instance, besides the potential pitfalls in the mechanisms of memory formation, consolidation, storage and retrieval, false memories may surface from the techniques used to elicit them, particularly when young children are questioned (Howe ML and Knott LM, 2015).

Stepping out of courtrooms, memories play an important role in medicine too, for example in psychological treatments. In cognitive-behavioural therapy the client is taught to reframe thoughts and attitudes relating to past events to help her/him adopt a coping strategy, diploma in hypnotherapy means of appropriate metaphors, often aims at inducing the unconscious mind to store negative memories in a sealed place where they cannot exert negative effects anymore. On the contrary, psychoanalysis aims at retrieving past negative memories from the client’s unconscious mind to face current conflicts.

The past and memories also play an important role in the patient-physician relationship. In fact, the first and most important step in this relationship, that is history taking, relies heavily on recollecting memories from the past. Some patients may hide (consciously or unconsciously) past traumas that might explain present functional symptoms. The astute physician should thus find out if a past event in a patient’s life is influencing her/his story-telling, particularly in patients with chronic symptoms.

What about the physician’s past? Undoubtedly personal, professional, cultural and religious factors may shape their approach to patients. Moreover, memories, which influence the emotional state, may condition the physician’s decision-making process (Resnick ML, 2012).

In conclusion, what do ’45 years’ and ‘Spectre’ tell us about what is positive and negative from the past and memories? Should Kate Mercer have forgotten her husband’s dead fiancée? Should James Bond keep relying on advice coming from the past? When in doubt, forgiveness may be of help: the Hungarian psychiatrist Thomas S. Szasz once said: ‘The stupid neither forgive nor forget; the naive forgive and forget; the wise forgive but do not forget’.

Howe ML and Knott LM, The fallibility of memory in judicial processes: Lessons