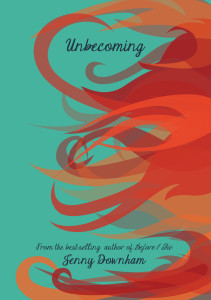 They say don’t judge a book by its cover, but the cover of Unbecoming is beautiful, and the story inside even more so. I’m generally a bit wary of Jenny Downham as an author because I did not enjoy Before I Die, and when I read the blurb for her most recent work, I wasn’t intrigued. It sounded very stereotypical, and to be honest, just like every other young adult book out there.

How wrong I was.

Unbecoming is a long, thoughtful book that covers three family stories, giving us three beautifully explained situations. The power behind such wonderful writing will make you think and question whether you’ve really determined the extraordinary richness behind the lives of people you might generally consider entirely average.

The book follows the story of three characters: Katie, who’s struggling with her sexuality, her mum Caroline, who’s struggling with just about everything, and Katie’s grandmother Mary, who has Alzheimer’s and who has just lost her long term partner. Unlike most young adult books, Unbecoming contains an LGBT character without the need for the book to be entirely devoted to the issues of LGBT acceptance and romance. I thought Mary’s story in particular was very well crafted and it formed the bulk of why I liked Unbecoming so much. The book explains the thoughts and feelings of someone with progressive memory loss very effectively, and for this reason I’d say that this book (or at least Mary’s parts) is a must read for anyone working with the elderly.

At the start of the book, Katie and Caroline barely know anything about Mary. We begin at the same point that many doctors might do – seeing the grandmother as someone in need of care, but for whom we have no particular attachment. Mary is sent home with Caroline and Katie to a world unfamiliar to her.  As the story develops we learn more and more about Mary – how she struggled to raise Caroline, how her relationship with her sister and father shaped her, and how all of this affects how she interacts with Katie. There are a lot of difficult topics involved, yet this remains an optimistic book.

At the beginning I thought that this was going to be a very long and tedious read about some very commonplace issues. Katie starts off by talking about her life and it all sounds very much like a whiny blog post from a teenager about how hard her life was – but then a rich tapestry evolves. When you meet someone you just don’t consider the ways that his/her life might interlink with those around them. This book demonstrates just how wrong such thinking can be. I’ve never read anything that works so well in support of holistic care – although there are several problems that could be solved so easily, in context some solutions make no sense at all. You question the hospital’s decision to send Mary home to a daughter she’s never known, and who has no idea how to cope with her mother. You wonder why on earth social services are so unhelpful to a family already struggling. The expectations placed on these three women by society are woven in and together seamlessly, showing you just how flawed these expectations can be, especially when created by those who have no understanding of what the lives and challenges of those outwardly viewed as ‘normal’ might be.

Unlike most young adult books, the focus here is firmly placed on family relationships. Yes, there is romance in Katie’s developing liaisons, but love doesn’t in the end conquer all. It also isn’t a typical ‘issue’ book that focuses exclusively on sexuality or dementia or learning difficulties or depression – it just presents the problems as part of everyday life, which makes them much more realistic. There was a real sense of the characters having a whole life, rather than the book merely showing the progression of one aspect. There is supposedly a twist at the end, but I thought that this was quite predictable and left a flat conclusion to an otherwise amazing book.

Unbecoming covers several hard-hitting issues and on discussion you’d assume they were too numerous to cover sensitively in one work. The book successfully shows us that an ‘ordinary’ person will go through many of these struggles in the course of their life, sometimes all at once, and that normally it just wouldn’t be considered that anyone would be processing this much turmoil in their life at any one time. Divorce, learning difficulties, Alzheimer’s, the changing views of society on single parent families, sexuality and grief – all of these are covered beautifully, giving us a real understanding of these three women and what makes them act in the way that they do.

The storytelling around Katie’s sexuality is beautiful. Far from realising her orientation and everything being sorted as is so often depicted in the fictional world, we see that same sex relationships are just as, if not more complex than otherwise seen. There is none of the usual ‘you’re gay I’m gay therefore we’re automatically in love with each other’ trope that seems so prevalent in young adult fiction at the moment. The pressures on Katie are realistic and ones that we can all relate to, and it’s so interesting to read the views of Caroline and Mary on these issues.

The descriptions of the relationships between mother and daughter, siblings and grandparents are diverse and evocative. There is something in Unbecoming for everyone because of the sheer detail and complexity, delivered so well as to be relatable in every sense. There is a slow unfurling of what makes these people tick and it’s something we perhaps miss in the hustle and bustle of everyday medicine. The relationships in the book develop slowly, with individual thoughts and processes being described so beautifully as to be haunting. You’ll go through your days after reading this book questioning everything. Unbecoming succeeds in delivering justice to the gradual development of its characters, both in spite of, and because of, the difficulties afforded to them.