This week, transgender patients have been encouraged by NHS England to enroll themselves in screening programs suited to their physiological sex, rather than their preferred gender.

Currently in the UK patients are invited to sex-specific screening programmes (breast cancer, cervical cancer, abdominal aortic aneurysm) by their GP according to their registered gender. For many trans people, this is not the gender to which they were born, and therefore they may still possess organs which leave them vulnerable to specific diseases.

For example, patients registered as male but born female do not routinely receive invitations for breast cancer or cervical cancer screening tests, despite the fact that they remain at risk from these diseases. For trans men, the NHS recommends breast screening if the patient has not had chest reconstruction (top surgery), or still has breast tissue. 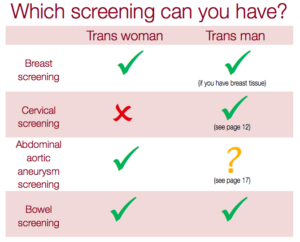 Public Health England recently issued a pamphlet, “Information for Trans People”, which advises trans people which screening programmes are most appropriate. But this puts the onus on the patient to ensure that he or she is on the correct screening registers, a process which won’t be done automatically by GP surgeries. The pamphlet urges trans people to speak with their GPs to ensure they are being offered the right services to best protect their health.

Conservative backbencher, David Davies, missed the point entirely when he said to the Mail on Sunday that “this NHS effort to be politically correct is putting the lives of women who claim to be men at risk.” The NHS is right to respect the chosen gender of trans people. However, in GP surgeries time must be set aside for frank discussions between doctors and their trans patients about which screening programmes should be considered.

Medical schools are making good progress in ensuring future equality of care for trans people. For example, at Cambridge University, a useful part of the Public Health course introduces students to sensitively including an ‘organ inventory’ when taking a history from a trans patient, and explore in an open and honest conversation how each trans person would like to approach their care going forward.