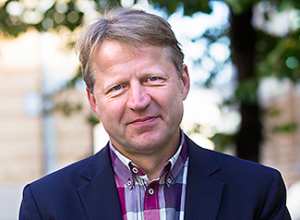 Oskari Heikinheimo is professor of obstetrics and gynaecology at the University of Helsinki. He is also a new associate editor on the board of BMJ SRH.

Kate Womersley, BMJ SRH’s social media editor, caught up with Heikinheimo to hear about the political attitudes around abortion and contraception in Finland, conscientious objection and exciting research underway in the field.

Kate Womersley – How would you describe what you do?

Oskari Heikinheimo – I have been a specialist in obstetrics and gynaecology since 2000. I specialize in family planning and reproductive health: contraception, abortion care, endometriosis, bleeding disturbances and miscarriages.

I studied at the University of Helsinki in Finland, followed by a postdoctoral research fellowship at the Jones Institute in Virginia from 1992-95, after which I completed my clinical training at the University of Helsinki. Throughout my medical life, I’ve been very involved with teaching. Even as a student I was teaching biochemistry. In 2013 I became a professor at the University of Helsinki. Most of my time I’m involved in university activities, for example working on textbooks (the Finnish textbook of obstetrics and gynaecology for our residents, medical students and GPs), evaluating grants and supervising research. But I’m also an active clinician and physician, and have been in charge of a large obstetrics and gynaecology unit at the Helsinki University Hospital.

KW – As a specialty, sexual and reproductive health often comes under political and social pressure in many European countries. Does the specialty have that political charge in Finland?

OH – No. Maybe it’s part of the Finnish character that people are rather calm and not easily provoked. In Finland, as in all Nordic countries, abortion care is provided by society and is widely approved. Occasionally there might be a politician who tries to promote him or herself by trying to criticize liberal abortion care, but this normally fails.

On paper, Finland probably has the strictest abortion laws of the Nordic countries. The Finnish legislation is somewhat similar to that in the UK. You need to have an indication and official approval, but the law is interpreted liberally. In practice, nobody is denied an abortion if they want one. Even more liberal, in other Nordic countries – Norway, Sweden and Denmark – women can book their abortion up to 12 or 18 weeks of gestation without need a stated indication.

In Finland, as well as these other countries, the abortion laws date back to the 1970s, and I think it works well. From my perspective, it’s important that the service is provided by society rather than privately funded. Most women who request abortion services are in the early part of their lives. If they were asked to pay a significant sum of money for these services that would be a great hindrance to access the service. Provision is part of public service.

KW – What is the Finnish attitude to conscientious objection?

OH – It’s practically impossible to become a specialist in obstetrics and gynaecology if you’re unwilling to provide abortion services during your specialization training. Most of the time this is not really an issue. Occasionally I get asked questions from young doctors who want to become obstetricians or gynaecologists. But if they are unwilling to participate in abortion care, it’s very difficult for them to get their specialist training. Abortion is not a very big part of the workload, but it is a very important part of the overall reproductive care and service to women.

We recently wrote a piece in the European Journal of Contraception stating that in Iceland, Sweden and Finland, conscientious objection does not really exist. There are of course people in the medical profession who do not want to provide abortion services. If one does not approve of induced abortion, there are multiple interesting fields in medicine! But philosophically it’s very important to be willing to participate as an Obs and Gynae trainee. In addition, being in charge of a big hospital, I know that if we had staff who were able to pick what they would and would not do, while the rest of the staff had to cover for them, it would break up the workplace.

The women seeking abortion deserve as good a service as any other patient. Typically young woman has an unwanted and unplanned pregnancy as she is starting her independent life. However, in a couple of years her life will be entirely different. By providing good care we may also be able to build confidence in the public service.

KW – Are there advances in the field of SRH that you find particularly exciting?

There is a big discussion right now in Finland about what society’s role should be in providing contraception. Traditionally women and couples have been responsible for paying for their contraception. Now there are public petitions to parliament demanding that society should provide contraception free of charge to young women.

The Finnish health system is a low cost system. Some parts are free, such as family planning visits in primary healthcare settings, but some services (such as contraceptive provision) depend on the community. A referral to a public hospital for a consultation costs a minor sum of approximately 30 euros, but that would be the same even if you have an MRI or colposcopy. It is the visit in itself that you pay for. We also have a private sector where you can handpick your doctor, but that may cost several hundred euros. If you live in a community where the service is well organized, a woman wouldn’t necessarily have to pay for contraception at all, though she wouldn’t be able to choose her doctor. There is a lot of variability.

We just had a paper published in The American Journal of Public Health (AJPH), looking at the city of Vantaa, a large community in the Helsinki metropolitan area that has been offering free IUCs and contraceptive implants for all women since 2013. We looked at the uptake of these free methods in different age groups, as well as the rates of induced abortion in following months and years. We could clearly show that among women under 25 years of age, the free contraception scheme was very effective: uptake of the methods increased, and the rates of induced abortion (as a marker of unplanned pregnancy) went down. Especially among women under 20 years of age the scheme was cost-effective for the community. For women between 20 and 25 years, the scheme was cost-neutral. For women over 25, it was a cost to society to provide a LARC and there was no effect on unplanned pregnancy. Of course abortion was only one marker here, and the study could be extended.

From my expertise, my heart is for the public service model. I very much hope that society will provide free of charge contraception to young women up until the age of 25. Public money is always limited, but it is good value for public money to focus on younger age groups.

KW – What other research are you working on currently?

I’m working on a nationwide study on endometriosis, currently analyzing the risk of cancer and risk of death. The Nordic countries have very good healthcare registries. We have identified a cohort of 50,000 women who, over the last 25 years, have had a surgical procedure due to endometriosis as identified from the hospital discharge registry. In order to have a definite diagnosis of endometriosis one should have surgical verification. We have linked this cohort to the Finnish cancer registry and the causes of death registry. We also have a control cohort of women who can be matched for geographic area and age who do not have endometriosis. The registries have also made possible the classification of endometriosis types – peritoneal, ovarian, and deeply-infiltrating endometriosis.

Although it may sound easy, it has taken a long time to refine the data. We see, as in other studies, that endometriosis is associated with increased risk of ovarian cancer, and clear cell histology –ovarian endometriosis is a particular risk factor for those. Also there is a decreased risk of cervical cancer, no change in breast cancer risk and some increase in thyroid cancer. We are writing these findings up now.

KW – What do you think are the most pressing unanswered questions in sexual and reproductive health?

OH – We have been looking at post-abortion contraception and especially the efficacy of intrauterine contraception. It’s so obvious, but while we know that these methods are very effective, we are also learning that it’s not just the methods that are important, but how you organize and provide the service as to whether the efficacy really materializes. We are running 2 large randomized studies looking at the different ways and time-points for starting intrauterine contraception after induced abortion. On paper you might have very good service provision, but in practice it doesn’t work if you tell women: “Yes, you’ll get a free IUD, but the clinic is on the other side of town and you need to make the reservation yourself.” Many of the women never go there. How to organize the service so everyone gets the best benefit? It’s not rocket-science, but it’s very important.

It’s crucial to at least try to collaborate across specialties in the SRH healthcare field. In a university hospital, it’s all too easy to live in a glass tower and say, “Oh, we know how this should be done.” The system shouldn’t be so distinctly divided between primary and specialist care, but should be linked as a whole. We need to think about the patient’s perspective to care, and the ease of their access.

KW – As an associate editor on the board, what are your hopes for this new international journal in sexual and reproductive health?

I’ve been involved with other journals in the past, including a Finnish journal Duodecim. When I was invited to join the BMJ SRH editorial board, I knew that there was, and is, great potential and enthusiasm for a European conversation. We should recruit more associate editors outside of the UK who can also be promoters for the journal in their own work, and increase the journal’s visibility and get opinion leaders on board.