A recent trial of keyhole knee surgery for partial meniscectomy showed surgical intervention was ineffective. Surgery rates have varied markedly over time and across the UK, suggesting there is a lot of overtreatment.

Published in the Annals of Rheumatic Diseases the randomised trial reported arthroscopic partial meniscectomy was no more effective than placebo surgery in patients with degenerative tears of the medial meniscus. At two years after surgery, no differences were found in knee scores or knee pain after exercise.  Also, no differences were found in secondary outcomes or in those patients with mechanical symptoms, meniscal tears or in those who failed conservative treatment.

What’s new about this trial?

Over the last 15 years, systematic review evidence has consistently pointed to the lack of trial evidence to guide practice for arthroscopy.

A 2009 Cochrane review (now withdrawn) of surgical treatment for meniscal injuries found only three trials involving 260 patients to inform practice. Due to the lack of evidence, no meaningful conclusions could be drawn. Between 2000 and 2009 no new trials were published to inform this review, despite the growing use of meniscectomy and the clear message that data informing use was lacking.

A 2015 BMJ systematic review of arthroscopic surgery in middle-aged or older patients with knee pain (with or without signs of osteoarthritis) identified nine trials. However, while arthroscopy showed a small benefit in pain – of debatable clinical significance to patients – at 3 and 6 months there was no difference at 24 months, and no effect on physical function. Interventional harms included deep venous thrombosis pulmonary embolism, infection, and death.

A 2016 review of surgery for meniscal tears also included nine trials. The review highlighted a lack of RCTs to guide surgical management. In the same year,  another systematic review on arthroscopic partial meniscectomy in knees with degenerative changes included only two RCTs, which showed a small benefit of surgery in those with limited degenerative joint disease when compared with conservative treatment.

FInally, the results of a Cochrane review of joint lavage for osteoarthritis of the knee have previously shown there was no impact on pain relief or improvement of function in the surgical group. Insufficient numbers were studied to exclude serious adverse events such as joint infection, effusion, haemarthrosis, or deep vein thrombosis.

How does arthroscopy vary in practice?

Despite the consistent lack of evidence from systematic reviews to guide practice the number of knee arthroscopies done in England in those aged ≥60 rose from 185/100,000 population in 2000 to 267/100,000 in 2011. However, over the same period, rates In Scotland only changed by 4%.

Why do rates of knee arthroscopy differ so much? 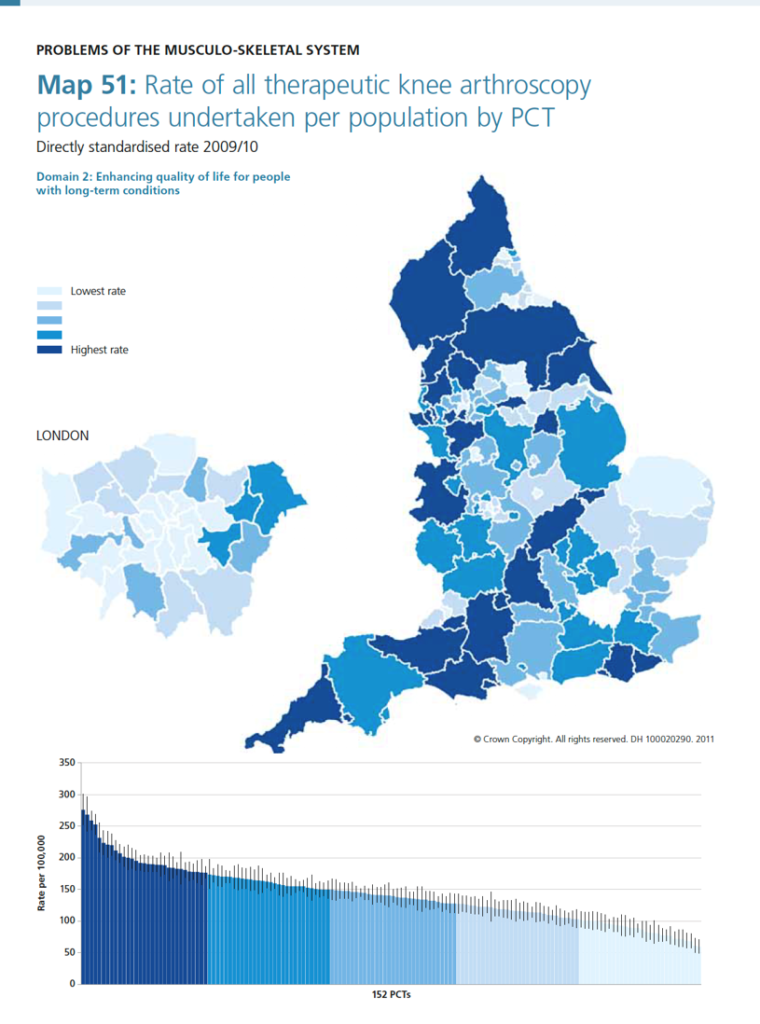 The increases seen in knee arthroscopy in England resulted in rates similar to those observed in private insurance based markets such as the US. The increased productivity and reduced costs lead to an increased tendency to offer surgery – reflecting provider priorities to maximise productivity and income rather than patient need. Rates of surgery are much higher in areas with a large number of independent treatment centres. Fragmentation of services (something that didn’t happen in Scotland) commercial interests and standardisation of treatment pathways all contribute to the considerable variation seen in England. Surgical preferences and population demographics seemingly add only a small contribution to the variation observed.

What should we conclude?

Carl Heneghan is professor of EBM at the University of Oxford, director of CEBM and Editor in Chief of BMJ EBM

Carl has received expenses and fees for his media work including BBC Inside Health. He holds grant funding from the NIHR, the NIHR School of Primary Care Research, The Wellcome Trust and the WHO. He has also received income from the publication of a series of toolkit books published by Blackwells. CEBM jointly runs the EvidenceLive Conference with the BMJ and the Overdiagnosis Conference with some international partners which are based on a  non-profit making model.