Evidence-based medicine was invented in about 1990, but we still don’t have an ology word to describe it or its practitioners (its ologists).

Most biosciences, with some exceptions (see the examples), have an ology, and their practitioners can be called ologists. So what should we call the practice of EBM and its practitioners?

The word “evidence” entered English in the 14th century, when it meant simply an example or instance, a now obsolete meaning. It then acquired other meanings (Figure 1), including (first citation 1380) a succinct expression of what we think of as evidence in medicine—ground for belief. Legal meanings came later: “[evidential] information” at the start of the 16th century and “statements or proofs admissible as testimony” in the 19th.

Figure 1. The meanings of “evidence” as listed in the Oxford English Dictionary; in each case the arrow points to the date of the first cited example in the dictionary; I have omitted phrases, such as “in evidence” and “produce in evidence”; obsolete uses are in purple

“Evidence” derives from the Latin noun evidentia, which combines the prefix e[x], meaning out of or from, used in many senses, with the verb videre to see, notice, or observe, but also to ascertain by inquiry or consideration. Evidentia means that which is evident and also the quality of being manifest not only to the eyes but to all the senses.

Videre in turn comes from the IndoEuropean root WEID, to look at or see. The four ancient sacred Sanskrit texts known as the Vedas contain Hindu wisdom, obtained through seeing clearly. Wisdom and derivatives such as wise, wiseacre, wizard, wit, and unwitting come into English via Teutonic languages.

Things that we see can be described as views or vistas, seen perhaps from a belvedere. The face is a visage and a visor covers it. You visit to see someone in your purview, perhaps to interview them. Clairvoyants supposedly see the future clearly, and voyeurs see, perhaps too clearly, what they shouldn’t. You may envy what you invidiously see in others. Vis-à-vis which, many words that imply seeing end in –vise or -vision: advise, devise, improvise, circumvision, prevision, provision, retrovision, revision, supervision, television.

Dropping the W from WEID gives a wide range of other words. An idol is a physical image and an eidolon is an unsubstantial image, a spectre or phantom. An idea is like an image formed in the brain; Plato conceived of it as an abstraction considered to be an imperfect copy of something and Kant described it as a concept that denotes an object beyond the bounds of experience or knowledge. An ideogram is a symbolic representation, a visual metaphor, or a picture that represents an idea in writing.

The EIDOS classification (Greek εἶδος, class, form, kind) describes adverse drug reactions mechanistically, according to the Extrinsic moiety that produces them (e.g. a beta-blocker), the Intrinsic moiety primarily affected (e.g. beta-adrenoceptors), the Distribution in the body of these two moieties (e.g. the heart), the pharmacological Outcome (e.g. antagonism), and the clinical Sequela (e.g. bradycardia).

An eidetic image, first described by the American psychologist Gordon W Allport in 1924, “revives the earlier optical impression when the eyes are closed, in a dark room, and sometimes when the eyes are normally open, with hallucinatory clearness”; Allport took his cue from the German psychologist Viktor Urbantschitsch who in 1907 described what he called Anschauungsbilder, “viewed images”. Other similar terms that Allport listed were subjective vision, memory after-image, primary memory-image, projected memory-image, and imaginary perception. Those blessed with an eidetic (or photographic) memory can actually see, not merely remember, images in their mind’s eye long after they have looked at them; many children, as Allport pointed out, have it, but most lose it before their teens. 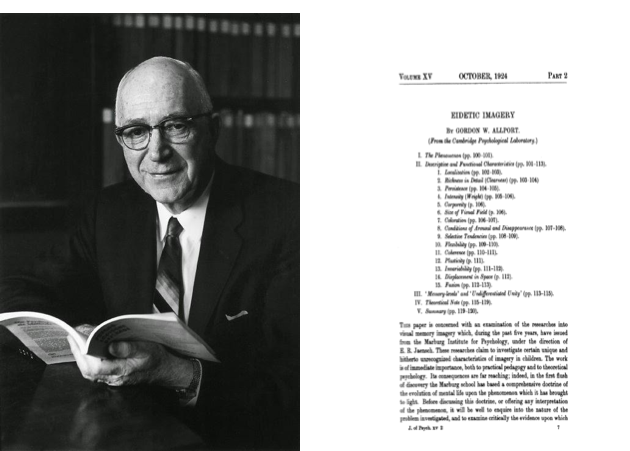 Of course, in seeking evidence in clinical medicine we do not rely on vision alone; we use all five senses. We use our eyes to look at, for example, a rash; our ears to listen to the heart sounds; touch to feel the pulse or palpate an unusual lump; and smell to detect alcohol on the breath or evidence of neglectful hygiene; in the past clinicians have even tasted the urine, for example, to diagnose diabetes mellitus, or the sweat, to diagnose cystic fibrosis. When our senses are inadequate we rely on more sensitive detectors, such as radiography and histology, which allow us to see things we could not otherwise see, and biochemical tests to determine the concentrations of invisible substances.

An ology of evidence

Evidence-based medicine, which Gordon Guyatt originally called “scientific medicine”, was invented in about 1990, but we still don’t have an ology word to describe it or its practitioners (its ologists). Although some might find “evidentiologist” attractive, purists dislike hybrid words, formed of elements belonging to different languages. So, since “ology” is from Greek (λόγος, a word), ideally we need a Greek evidential prefix to add to it. The Table below lists, in alphabetical order, candidates, some nouns some adjectives.

Table. Greek candidates for coining a word to mean the study of evidence or one who practices evidence based medicine