I love snowflakes. I enjoy crunching them underfoot on a crisp winter’s day and the silky feeling that you get when skiing through a fresh fall.

The word “snowflake” entered English in the early 18th century, first recorded in a pantomime called Cupid & Psyche, or, Colombine-Courtezan, based on the tale told by the Numidian writer Apuleius (c124–c170) in The Golden Ass: “Soft as the cygnet’s down his wings, And as the falling snowflake fair”. This was a surprisingly late entry, considering how early its separate components, “snow” and “flake”, had appeared. The earliest instance of “snow” cited in the Oxford English Dictionary is in the Vespasian psalter, from c825 AD: “Se seleð snaw swe swe wulle”, which is an Old English translation of the Latin version of Psalm 147, verse 16: “qui dat nivem quasi lanam”, or in the original Hebrew

which literally means “the giving of snow like wool”, more clearly translated as “he spreads snow like a woollen blanket”. “Flake” first appears, linked to snow, in Chaucer’s House of Fame (c1384): “As flakes fallen in great snowes”.

But words evolve and, like many other words, “snowflake” has accrued many other meanings.

Snow-buntings have white bodies and what appear to be flecks of snow on their wings. Starting in the late 17th century, they were therefore called snow-flecks. Then, in the late 18th century, that became corrupted into “snowflakes”.

At about the same time, William Curtis published his Flora Londinensis, which included the picture of a purple foxglove that William Withering used as the frontispiece to his 1785 monograph on digitalis, An Account of the Foxglove. Curtis gave the name snowflake to the Leucoium aestivum, to distinguish it from Galanthus species of snowdrops, both members of the family Amaryllidaceae. These plants contain galantamine, a cholinesterase inhibitor that has been used to treat dementias; the results have been unimpressive in both Alzheimer’s disease and vascular dementias. 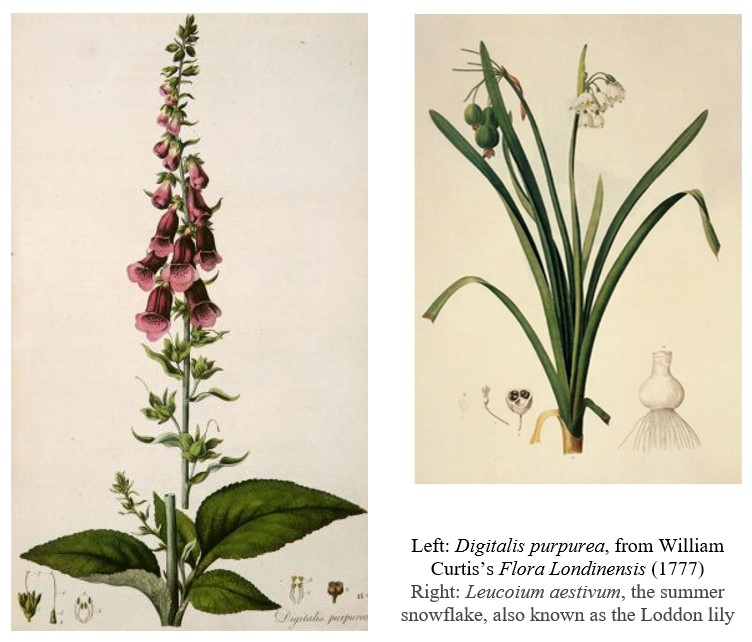 As in the psalm, snow and wool also come together in the use of the word “snowflake”, when it describes a method of weaving woollen cloth.

A snowflake is also the name given to a hairline crack in metal, arising when the metal has not been allowed to cool down sufficiently slowly, and described in a 1919 issue of the Bulletin of the American Institute of Mining Engineers as a “white silvery area, which always has the appearance of being of a very coarsely crystalline structure”.

Snowflakes appear in mathematics too, and I discuss one instance in the Interesting integer section below. Here is another. Draw an equilateral triangle (Figure a; black). Now on the middle third of each side draw another equilateral triangle and erase its base (b; red). Now repeat that on each available side in the new shape (c; blue). If you continue doing this you get a shape that resembles a snow flake (d). This is a fractal pattern, one that has the same local characteristics no matter how high a magnification you choose to look at it. The boundary is of infinite length, because you can go on adding new triangles forever. However the area it encloses is finite and is 60% larger than the area of the original triangle. 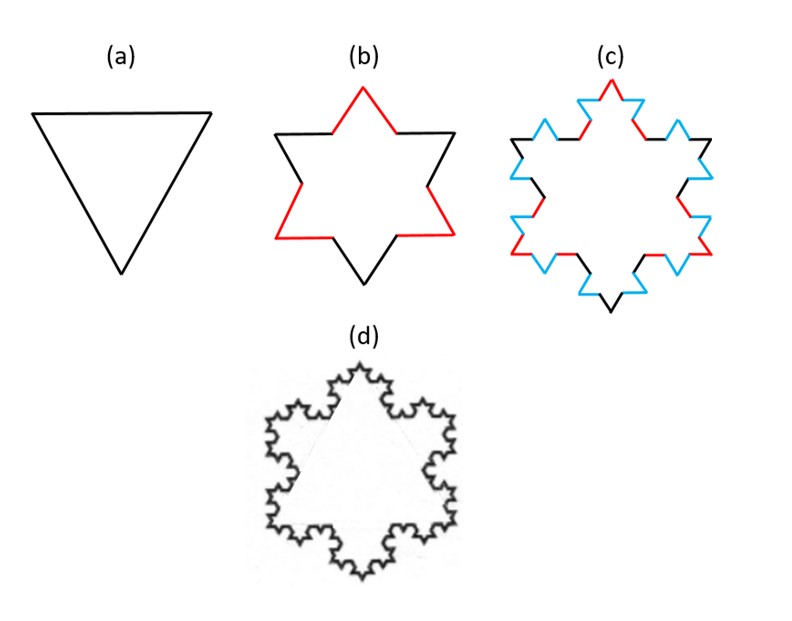 One more meaning of “snowflake” remains to be explored.

Ah, well, I should have expected that to happen 🙂