As I mentioned last week, when discussing the medical entries in Crooke’s 1903 edition of Yule and Burnell’s 1886 compilation Hobson–Jobson: A Glossary of Colloquial Anglo-Indian Words and Phrases, and of Kindred Terms, Etymological, Historical, Geographical and Discursive, the authors often relied on what they referred to as “Hanbury and Flückiger”, a volume titled Pharmacographia: a History of the Principal Drugs of Vegetable Origin met with in Great Britain and British India, published in 1874. The volume to which they referred was in fact by Friedrich August Flückiger and Daniel Hanbury, its title longer than the one they gave (Figure 1). It is not clear why the names were reversed in Hobson-Jobson. 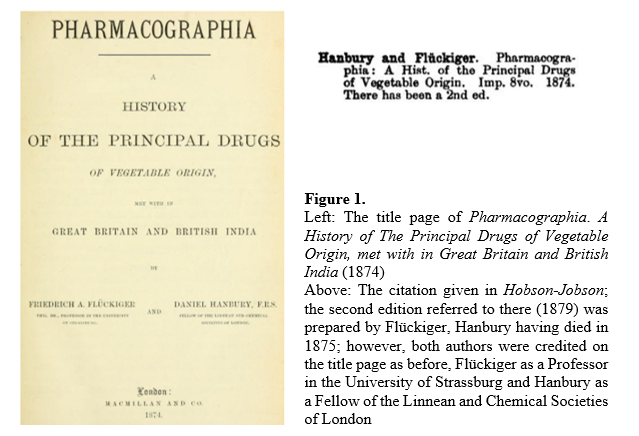 The Oxford English Dictionary (OED) defines “pharmacographia” as “a treatise on pharmacognosy”, with a single citation, Flückiger and Hanbury (1874), although a note tells us that it had previously been used in 1831 “or earlier in a work title”. The work to which the note refers was presumably a dissertation, by Mauritius Landsberg from Bratislava, titled Pharmacographia Euphorbiacearum. Dissertatio Toxicologico-Medica Inauguralis quam Consensu et Auctoritate Gratiosi Medicorum Ordinis in Universitate Literaria Friderica Guilelma pro summis in Medicina et Chirurgia Honoribus Rite Obtinendis, and dated 30 May 1831. In the European style of the day, which persists in some countries, the dissertation was prepared as a bound publication for the author’s public defence of his research, and the names of his opponents are given on the title page: Dre Braun, A Bartels, and J Wollheim.

Landsberg’s dissertation was written in Latin, and so the word “pharmacographia” in the title would not qualify as having been introduced into English at that stage. But when it appeared in the English title of Flückiger and Hanbury’s magnum opus it qualified. The BMJ called Pharmacographia “an almost faultless monograph [that] abounds in research of every kind”, and Henry B Brady, in Nature, wrote that “[it] will be recognised at once and without misgiving as the standard of authority on the subjects of which it treats”.

Pharmacognosy is the branch of pharmacology that deals with medicinal plants, and the Pharmacographia is rich in information about such plants. For example, the entry on the Caryophilli deals at length with their botanical origins and their history; it describes how the flowers are collected and the cloves prepared, their macroscopic and microscopic structures, their chemical composition, their production and commercialization, and their uses.

There is even an interesting etymological note. Plants of the species Dianthus caryophyllus are commonly called gillyflowers, a word that arose homophonically from the original Greek, κᾰρῠοφυλλον, literally “a nut plant”. In French that became girofle or, by metathesis, gilofre, which in English became in turn gillofer, gilloflower, and gillyflower. That is the standard etymology. But the Pharmacographia has something to add: “The name is very variably written, as γαροῦμφουλ, καρφοΰφουλ, γαρόφαλα, whence it becomes probable that it is not really Greek, but an Asiatic word Hellenized.”

Sir William Jones, an English judge, whom Dr Johnson described as “the most enlightened of the sons of men”, came to Calcutta in 1784 and, already fluent in Latin, Greek, Hebrew, Arabic, and Persian, tackled Sanskrit—a tough task. As Monier Williams tells us on page 1 of his Sanskrit Grammar (2e, OUP, 1857), devanagari, the Sanskrit script, had 14 vowels (all but one having two forms), 33 simple consonants, and 400–500 conjunct consonants. But Jones mastered it and made an important discovery, which he reported in 1786 to the Asiatic Society of Bengal, of which he was the founder and President: “No philologer could examine [Sanskrit, Greek, and Latin] without believing them to have sprung from some common source, which, perhaps, no longer exists.” That common source is now called Proto-Indo-European and its hypothetical roots have been extensively reconstructed and investigated.

The Greek word κᾰρῠοφυλλον came from two IndoEuropean roots, KAR and BHEL, whose etymographies are shown in Figures 2 and 3. The archaeological record suggests that the earliest forms of IndoEuropean languages arose in Anatolia, now known as Asia Minor. So, insofar as all Greek words came originally from somewhere to the East of Greece, Flückiger and Hanbury, when they suggested that κᾰρῠοφυλλον had Asiatic roots, were right.