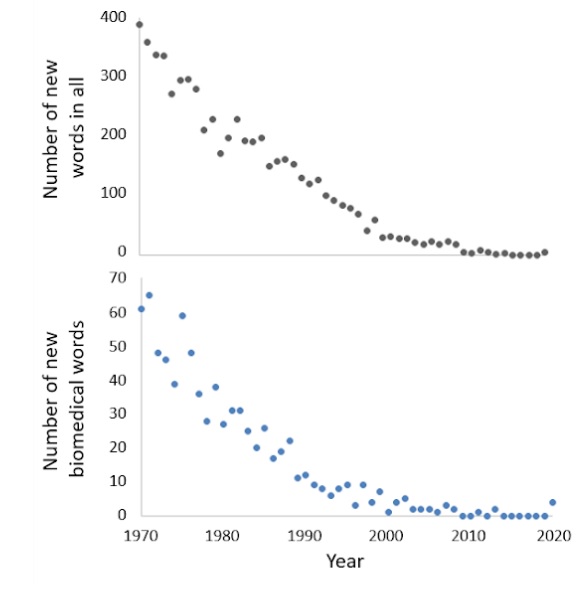 Figure 1. The numbers of new words (top panel) and of new biomedical words (bottom panel) by year of first citation in the Oxford English Dictionary (OED) 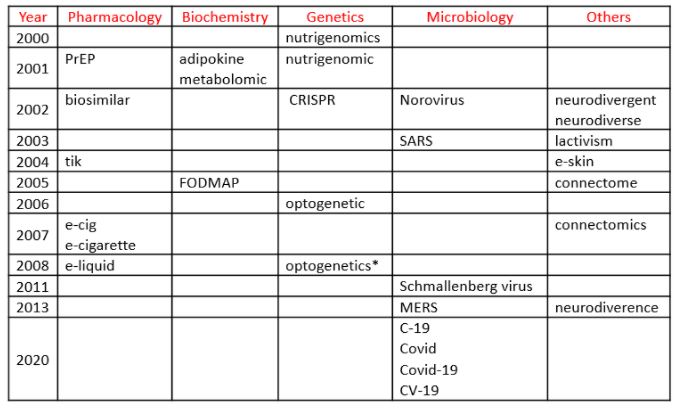 The 2000–2020 tranche of words is dominated by the field of microbiology: eight words in all, six of which are related to coronaviruses.

Avian infectious bronchitis was first described in newborn chicks in 1931. The filterable virus responsible was cultivated in 1937, and in 1951 a virus that caused hepatitis was isolated from mice. These were later identified as coronaviruses. For references see here.

Then in 1965, virologists David Tyrrell and Mark Bynoe published a paper in the British Medical Journal, in which they described a virus, which they called B814 and identified as a cause of the common cold. They thought that B814 and other similar viruses were rhinoviruses. However, in 1967 Tyrell and his colleague June Almeida published electron micrographs of viruses, 229E and B814, that were indistinguishable from the particles of avian infectious bronchitis. They first used the term “coronaviruses” in 1968.

There was little research on coronaviruses until the SARS coronavirus epidemic in 2003–4 and the Middle East respiratory syndrome (MERS or camel flu) in Saudi Arabia in 2012, also due to a coronavirus. On these occasions publications on coronaviruses increased. But neither of those epidemics compares with the deluge, the infodemic, of the last 18 months.

Soon after identification of SARS-CoV2, and the disease it caused, abbreviations were invented to describe both the virus and the disease. The following have found their way into the OED, listed here with the dates on which they were first recorded (three of them on Twitter):

The last of these, but now typically written in lower case, has predominated, outnumbering the others by about ten to one in a PubMed search.

Many other terms have become common currency during the pandemic (Box 1). Some of them are terminologically inexact or misleading.

Box 1. Terms that have become common currency in the UK during the coronavirus pandemic, with the dates of the earliest recorded uses of the terms in their relevant meanings; for more information see here

“Flattening the curve” is also a misnomer. The typical shape of an epidemic curve, described time and again, in epidemic after epidemic, is bell-shaped (Figure 2). A flat curve would imply a more prolonged epidemic. What one wants to do is to lower the peak, not flatten it. I have previously suggested that the peculiar humped shape of the so-called second wave of covid-19 last year may have been due to two separate overlapping bell-shaped waves.

Figure 2. Examples of bell-shaped epidemics
Left: deaths from influenza during three waves in London, 1890-2
Middle: cases of influenza and deaths in Stockholm, 1918-19
Right: deaths from plague in Bombay, 1905-6
Left and middle from Ministry of Health. Reports on Public Health and Medical Subjects. No. 4. Report on the Pandemic of Influenza, 1918–19. London: His Majesty’s Stationery Office, 1920
Right from Kermack WO, McKendrick AG. A contribution to the mathematical theory of epidemics. Proc R Soc A 1927; 115(772): 700–21 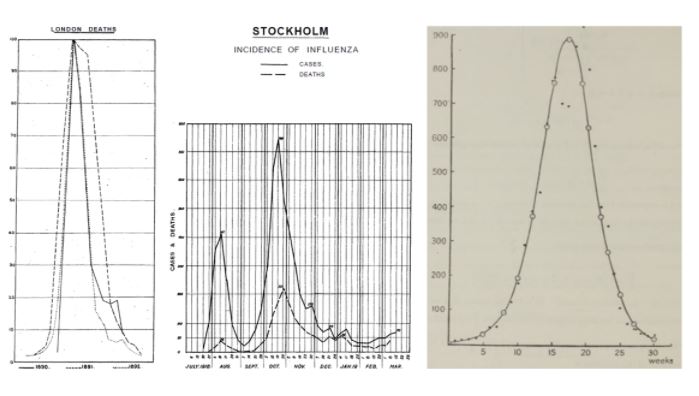 “Airborne”, a word that one would not expect to cause any difficulty, has become ambiguous. It started when the WHO declared that “COVID-19 is not airborne”, since they thought that it was carried on large droplets, which would fall to the ground, not aerosols, which would spread in the air. That is not the case, but the term “airborne” now seems to be being used to imply that the virus only or predominantly comes from exhalation. However, the virus is also excreted faecally and can thus become airborne. Nevertheless, advice to wash one’s hands thoroughly has not been given as much prominence as advice to wear masks. And we often see crowds of people huddled together wearing masks, as if social distancing was of no importance.

Words are often used misleadingly for ideological reasons; that should not be the case during a pandemic.