In most cases we do not know who first coined or even used a word. Evidence can generally be found of the earliest instance of a word in written texts, but we do not have a written history of speech nor vocal recordings earlier than the 20th century. Shakespeare, for instance, is credited in the Oxford English Dictionary with the first uses of words in nearly 1500 examples, from abrook, “Sweete Nell, ill can thy noble minde abrooke, The abiect people gazing on thy face” (Henry VI, Pt. 2 ii. iv. 11), to yravish, “The summe of this, Brought hither to Penlapolis, Iravyshed the regions round” (Pericles, Prince of Tyre x. 35). However, it is likely that in many instances the words he used were already in use but not written down anywhere.

In some cases, however, the inventor of a word can be identified with confidence, and the more recent the coinage the more certain one can be. Take the word “homeostasis”. It was coined by the Harvard physiologist Walter B Cannon in the 1920s. Studying the responses of physiological systems to perturbations in experimental animals, he found that the sympathetic nervous system and the adrenal medulla, by secreting adrenaline, were capable of rectifying the effects of certain stimuli. He and his colleagues also found a role for a substance that they called “sympathin”, whose production was stimulated by sympathetic nervous system activity: “We would suggest that it be called provisionally sympathin, with the understanding that as knowledge of its character increases it may prove really to be adrenin, developed for local action in smooth muscle cells.” We now call sympathin noradrenaline.

The first written instance of “homeostasis” is in a 1926 homage by Cannon to Charles Richet, in a volume edited by Auguste Pettit. Another example is shown in Figure 1. 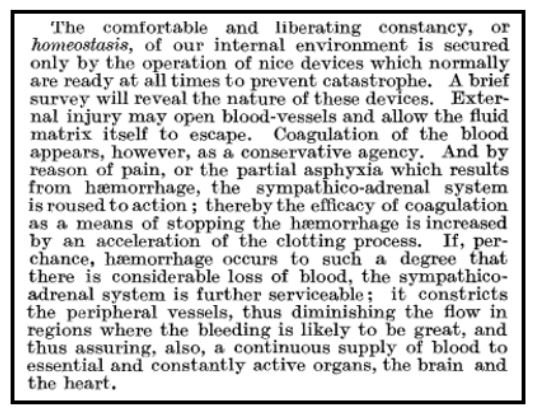 The word “homeostasis” comes from two Greek words, ὅμοιος, the same or similar, and στάσις standing still or stoppage. Together they imply keeping things the same. In his 1945 memoir, The Way of an Investigator, subtitled A Scientist’s Experiences in Medical Research, Cannon described four principles of homeostasis, quoted verbatim here:

It is possible that Cannon was influenced in all this by the introduction in about 1920 of the idea of feedback in electronic systems, which generates oscillations. He was certainly influenced by Claude Bernard’s views on le milieu intérieur.

About 60 years later Peter Sterling, an epidemiologist, and Joseph Eyer, a neurobiologist, introduced a new term, allostasis (Greek ἀλλος, other, different), which appears in my list of newly cited biomedical words from 1988 (Table 1). They did so in order to explain data that linked patterns of physiological change with a variety of behavioural states. They described what they called “a critical principle of physiology: to maintain stability an organism must vary all the parameters of its internal milieu and match them appropriately to environmental demands. We refer to this principle as allostasis, meaning ‘stability through change’.”. They postulated that allostasis “involves the whole brain and body rather than simply local feedbacks [and is therefore] a far more complex form of regulation than homeostasis.”

Table 1. Biomedical words (n=22) in the OED for which the earliest citations are from 1988 (out of a total of 161); I have found one antedating (three years) 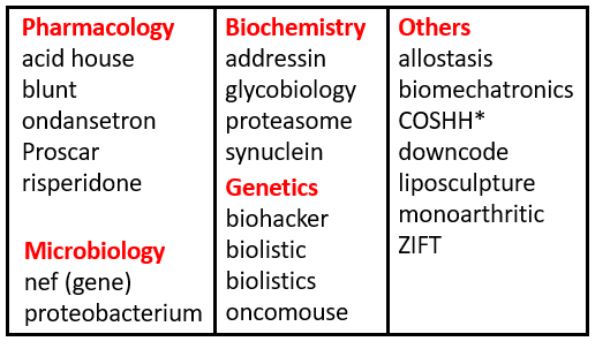 Sterling and Eyer suggested that the homeostatic approach to therapy of a condition such as hypertension involves the assumption that pharmacological approaches can restore normality, leading to “polypharmacy and iatrogenesis”. In contrast, they asserted that the allostatic model implies that reducing arousal is a more appropriate form of therapy.

Proponents of allostasis and “allostatic load” regard homeostasis as a flawed theory. I have searched in vain for a controlled comparison of the two approaches in treating hypertension.