Eponyms are not infrequently included in the Oxford English Dictionary (OED), and the list of biomedical words first cited from 1977 contains two, Pontiac fever and Polle syndrome (Table 1). The latter is a would-be member of the Munchausen family. 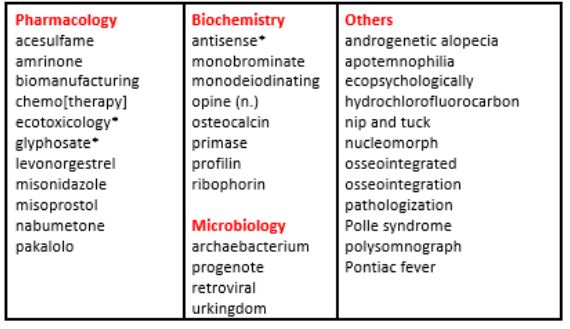 Richard Asher first described what he called Munchausen’s syndrome in 1951, and other related syndromes have subsequently been described (Table 2).

Baron Munchausen first appeared in a collection of five stories (Chapters 2–6 of the modern complete version), published in English in 1785, titled Baron Munchausen’s Narrative of his Marvellous Travels and Campaigns in Russia. No copies of the first edition have survived, but a second edition appeared in 1786. It was soon followed by an enlarged version, titled Gulliver Reviv’d: The Singular Travels, Campaigns, Voyages and Sporting Adventures of Baron Munnikhouson commonly pronounced Munchausen. Later editions were further enlarged by different hands, and the work as we now know it appeared as the seventh edition in 1793, although other additions and adaptations have since appeared. Although the 1862 edition illustrated by Gustave Doré is much praised, I prefer Thomas Seccombe’s edition of 1895, with its pen-and-ink illustrations by William Strang and J B Clark (Figure 1). A much later edition (Meridian, 1971), although incomplete, has excellent illustrations by Ronald Searle, whose grotesque exaggerated style matches that of the fictional Baron.

Figure 1. The cover and frontispiece of Thomas Seccombe’s edition of The Surprising Adventures of Baron Munchausen (London: Lawrence & Bullen, 1895) 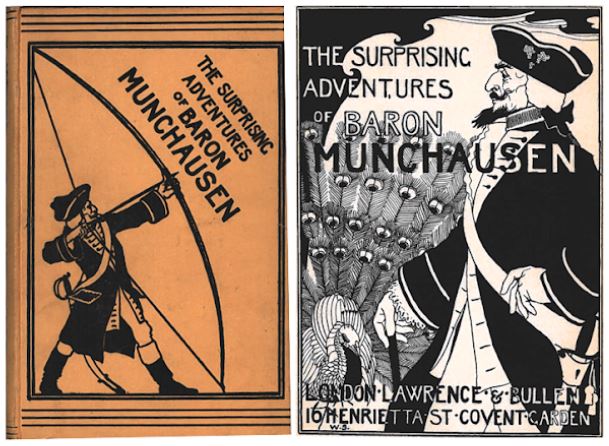 The original five tales were by Rudolph Erich Raspe, who fled from Germany to England in 1775, after having been discovered stealing the coins of which he was the curator at Cassel in Hesse. Raspe’s inspiration was Hieronymus Karl Friedrich Freiherr [i.e. Baron] von Münchhausen (in English Monkhouse), at whose mansion in Bodenwerder on the river Weser Raspe had been an occasional visitor. Münchhausen, born on 11 May 1720 in lower Saxony, became a cornet in the Russian Brunswick Regiment in 1740, rose to captain, and retired to live on his estate and tell extravagant stories about his adventurous life. Raspe, penniless in London, recalled the Baron’s stories, combined them with other tales that he had recorded in his commonplace book, and changed the Baron’s name to Munchausen.

After publication of the fictional memoirs in a German translation, Münchhausen, by Gottfried Burger in 1786, the Baron was plagued by inquisitive visitors, and fictions arose about the wild-eyed way in which he thundered out his tales. He died in 1797, a bitter man.

In 1977 Roy Meadow, in a paper titled “Munchausen syndrome by proxy. The hinterland of child abuse”, described two children whose illnesses were caused by their parents. Soon after, Burman and Stevens suggested that Munchausen syndrome by proxy should be called Polle syndrome, after a supposed daughter of the Baron who died young. Whence the listing of the syndrome in the OED. However, Meadow & Lennert researched the history of the Baron’s family, and showed that this name was inappropriate.

At the age of 74, after a long, happy, but childless first marriage to Jacobina von Dunte, the Baron married Bernhardine von Brunn, a 17-year-old flirt, who soon afterwards, under the pretext of an illness, took a holiday in Piermont; some months later she gave birth to a daughter, Maria Wilhelmina, whose birth and baptism were registered in the Lutheran Church of Polle, a small town on the Weser, near the Baron’s estate in Bodenwerder. The Baron disclaimed paternity and divorced Bernhardine. Maria Wilhelmina died with seizures at the age of 10 months. There is no evidence that Bernhardine’s daughter was the Baron’s child.

Paul Wingate, protesting on behalf of the real Baron, suggested calling the original syndrome after the Wandering Jew, Ahasuerus, “bearing in mind the amount of myth associated with these patients, their constant suffering, their lack of any fixed abode, their multiplicity of names, and their apparent immortality”. And Sven-Gösta Sjöberg pointed out that in Sweden sufferers, two of whom he described, were called Köpenickiades, after the German town of Köpenick, the scene of a famous hoax in 1906.

However, these and similar attempts to exculpate the original Baron are misplaced. In his 1951 paper in The Lancet, Richard Asher specifically referred to Raspe’s 1785 Cresset Press edition, Singular Travels, Campaigns and Adventures …. He named the syndrome, not after the real Baron, Freiherr Münchhausen, but after his fictional counterpart, Baron Munchausen.