This week I have reached 1973 in my exploration of the biomedical words whose first known written instances have been listed in the Oxford English Dictionary (OED) in individual years since 1970 (Table 1). In 1970 and 1971 pharmacology led the way, with biochemistry second; biochemistry caught up in 1972 but fell back to second again in 1973. 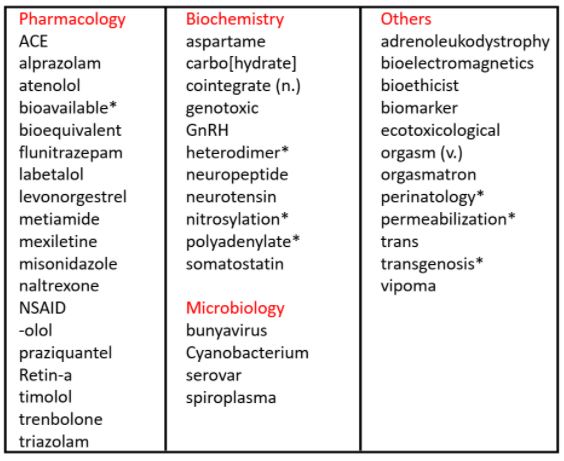 The 1973 list features six medicines or groups of medicines for invention of which Nobel Prizes in Physiology or Medicine were awarded: the beta-blockers atenolol, labetalol, and timolol, accompanied by the suffix, -olol, that the dictionary describes as “forming the names of beta-adrenoceptor blocking drugs derived from propranolol or having a similar molecular structure”; the histamine H2 receptor antagonist metiamide; and NSAIDs (non-steroidal anti-inflammatory drugs). These drugs were associated with two UK pharmacologists, the first two with James Black and the third with John Vane.

John R Vane (1927–2004) won his prize for work that he did at the Wellcome Research Laboratories in Beckenham, Kent. He shared the prize with Sune K Bergström and Bengt I Samuelsson from the Karolinska Institutet in Stockholm. The citation read “for their discoveries concerning prostaglandins and related biologically active substances” (Figure 1).

Figure 1. The winners of the 1982 Nobel Prize for Physiology or Medicine; from left to right Sune K Bergström, Bengt I Samuelsson, John R Vane

In 1971 John Vane showed that acetylsalicylic acid, sodium salicylate, and indometacin work by inhibiting the formation of prostaglandins, and in 1976 he discovered prostacyclin. The groundwork for this was laid in 1935, when von Euler (Figure 2) identified an extract of animals’ seminal vesicles and called it “prostaglandin”. Later, Bergström purified several prostaglandins, starting with prostaglandins E and F, determined their chemical structures, and showed that prostaglandins are formed from unsaturated fatty acids. Samuelsson delineated the metabolism of arachidonic acid and prostaglandins and clarified the chemical processes involved in the formation and breakdown of the various compounds in the system; he also discovered the endoperoxides, thromboxanes, and leukotrienes. 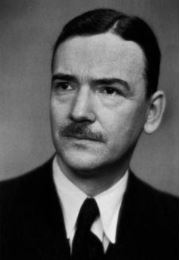 Vane’s experiments were elegant examples of classical pharmacology (Figure 3). They involved bioassays, elucidating a cascade of effects. Aspirin inhibits an enzyme that catalyses the conversion of arachidonic acid to prostaglandin G2. In 1974 Hamberg et al gave the enzyme the name cyclo-oxygenase (COX), an entry in next week’s list. Later work showed that there are isoforms of the enzyme, COX-1, COX-2, and COX-3. This led to development of selective inhibitors of COX-2 and recognition that paracetamol may be an inhibitor of COX-3. 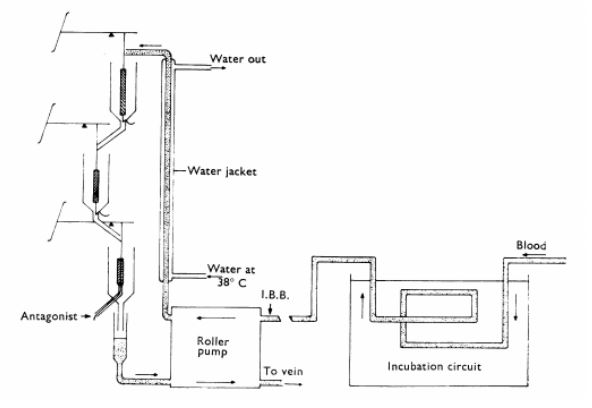 Figure 3. An example of the type of bioassay cascade that Vane used to demonstrate the mechanism of action of aspirin; the tissues used in the cascade either contracted or relaxed in response to substances in the arterial blood of an animal perfused through the system and then returned to the animal’s venous circulation; various antagonists or inhibitors could be added to select different actions; the number of tissues that could be included was not restricted to three; one such experiment, for example, included rabbit aorta, rabbit coeliac artery, bovine coronary artery, rat stomach strip, and rat colon; Vane described this technique in his Gaddum Lecture, delivered to the British Pharmacological Society in July 1968, which begins with a quote from John Gaddum himself: “The Pharmacologist has been a ‘jack of all trades,’ borrowing from physiology, biochemistry, pathology, microbiology and statistics—but he has developed one technique of his own and that is the technique of bioassay.”

The earliest instance of the term “non-steroidal anti-inflammatory agent [or drug]” that I have found dates from 1957. A product called Biosone GA was first advertised in The BMJ on 9 June 1956 and then again on 23 and 30 June, 1 and 29 September, and 27 October, always as “a new anti-inflammatory and anti-pruritic agent”. Then, on 21 September 1957, the advertisement changed. This time it proclaimed that Biosone was “a new non-steroidal anti-inflammatory agent” (Figure 4). Similar adverts appeared on 10 October 1957 and 11 January 1958. I think that Biorex Laboratories Ltd may have introduced the term as an advertising ploy, in response to the increasingly recognized adverse effects of corticosteroids in the early 1950s. I have previously discussed this in more detail. I have not found an earlier instance of the abbreviation “NSAID[s]” than that cited in the OED from 1973. 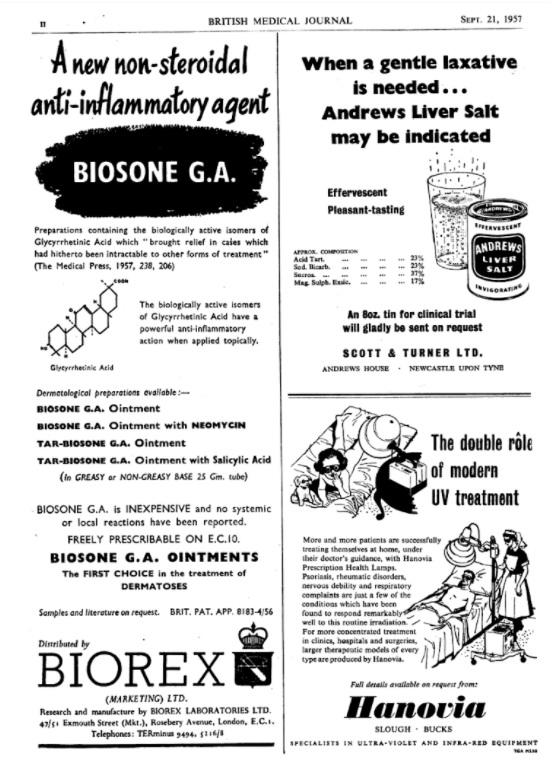 Figure 4. An advertisement for “a new non-steroidal anti-inflammatory agent” in The BMJ on 21 September 1957; this instance antedates the earliest citation given in the Oxford English Dictionary, from 1963

Biological assays were invented at the start of the 20th century. The earliest instance I have found comes from 1910 (antedating the OED by 12 years). They then became known as bioassays. Pharmacological bioassays involving single tissues are in principle very simple: you expose a tissue to an agent and measure its response. The earliest methods involved kymography (Greek κῦμα, a wave), measurement of contraction or relaxation of a tissue, transmitted to a stylus, which makes marks on a piece of smoked paper wrapped round a rotating drum. Vane’s insight was to link individual bioassays in a cascade. Experiments do not need to be complicated to yield profound results.