Breast cancer patients with early disease have traditionally had just two options—lumpectomy (breast conservation), which invariably has to be followed by whole breast radiotherapy, or a mastectomy. Unfortunately, for some patients, there hasn’t really been a choice since postoperative radiotherapy requires repeated daily hospital visits for up to six weeks. If it wasn’t possible for the patient to commit to this prolonged treatment then mastectomy was the only option, drastically altering their quality of life. In the 1990s I was a newly qualified surgical oncologist in India, and I faced this problem on a daily basis.

I was also studying the pathological distribution of breast cancer in mastectomy specimens. We found that in addition to the main cancer, multiple foci are often present scattered widely within the breast. This didn’t fit with the fact that local recurrence, if it occurred at all, was almost always limited to an area close to the original tumour. When we published this paper on multicentricity, we questioned whether these other foci really needed to be treated at all. Could we instead give radiotherapy just to the tumour bed during the cancer operation, perhaps sidestepping the need for whole breast radiotherapy?

Meanwhile in London, Professors Mike Baum and Jeff Tobias, in collaboration with Photoelectron Corp (USA), were exploring the potential of a miniaturised photon generator for intraoperative radiation as a tumour bed boost. I had just come to London to pursue clinical research and the news that the paper on multicentricity had just been accepted for publication reached me on my very first day of operating with Professor Baum. The problem, the solution, and a possible way of delivering it all suddenly became apparent in the discussions that followed between the three of us.

We envisaged and developed a new device that could give the whole radiation treatment during the surgery, in one single go with great precision, and limited only to the area of concern. This is possible even in a standard operation theatre because the radiation decay from the device placed in the surgical cavity within the breast means that scattered radiation with its associated hazards are effectively eliminated. With ethics approval, we performed the first case in July 1998 at the Middlesex Hospital in London. We described the new surgical technique as TARGIT (targeted intraoperative radiotherapy) and confirmed its safety and feasibility. In order to test this new approach against standard whole breast radiotherapy, we designed the prospectively randomised TARGIT-A trial, and started recruiting patients in March 2000.

It was only possible with committed long term international collaboration. It took multiple conference presentations and meetings to find and engage open minded colleagues with fire in their belly. TARGIT-A is not an industry sponsored trial. It was prompted by academic insight and run with foresight, enthusiasm, and hard work from each of the investigators, many of whom made significant contributions to different aspects of TARGIT-IORT, including radiobiological effectiveness and the novel demonstration that it has a beneficial effect on the tumour micro-environment. We also found evidence for reduced toxicity and pain, better cosmetic outcomes and quality of life, and that it performs well in terms of patient preference and cost effectiveness, all of which have been published recently.

The consistent return of follow-up data relied on countless individual investigators and their teams’ efforts, which were wonderfully supported by our trial centre team at UCL. All of us at UCL are extremely grateful for the huge personal effort from the collaborators that was required to achieve the remarkable 95% completeness of follow-up in this large international trial over a 20 year time period.

Even more importantly, I cannot emphasise enough the remarkable contribution of so many patients with breast cancer. They provided vital insight as members of our committees, as well as willingly participating in the trial itself.

The biggest battle the TARGIT investigator family has faced is our challenge to the conventional dogma that radiotherapy has to be given in multiple daily doses, and moreover that whole breast radiotherapy is always essential. Yet the long term outcomes of the TARGIT-A trial, which have now been published in The BMJ, have confirmed our initial results. Many medical advances have been made by discarding long held principles of treatment when something better comes along. 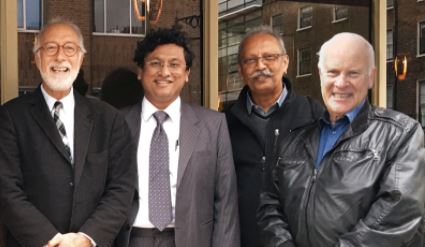 Competing interests: Grant from HTA, NIHR, UK, and travel to some meetings and honoraria from Carl Zeiss.