Several Old English poems begin thus, followed immediately or soon after by some variant of “we have heard ….”. The best known example is that of Beowulf, which dates from between 1200 and 1300 years ago. Here are the first three lines, with my own translation in parallel text:

I first read Beowulf in 1959, in a prose translation by David Wright, first published in 1957 in Penguin Classics, and have since accumulated more editions. Most of them translate “Hwæt” as some form of exclamation (Figure 1). But in 2013 George Walkden argued, from an examination of instances of “hwæt” in Old English texts, that the word was not an interjection, but “an underspecified wh-pronoun introducing an exclamative clause” and “parallel to how”, as in “How you’ve changed”. 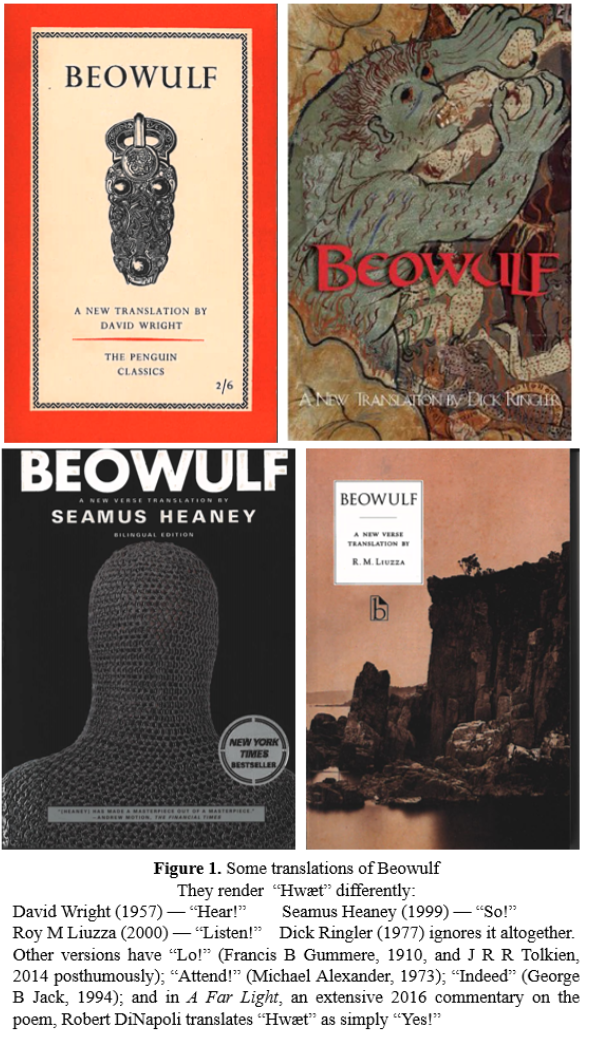 KWO was the IndoEuropean root of a range of relative and interrogative pronouns, like the Latin quis, quis, quid, and adjectives, like qui, quae, quod. In Old Germanic words it became hw, whence it entered Old English. This spelling persisted until the late 13th century, but by the 12th century it was already beginning to be replaced by wh, perhaps affected by words that came from different IndoEuropean roots, such as whelk (from WEL, to turn or roll), whip (from WEIP to vacillate or tremble ecstatically), and whit (from WEKTI, a thing). Some 13th century spellings used qu, or in Scotland quh, as in the family name Colquhoun. Furthermore, dialectic variations in pronunciation led in some cases to omission of the aspirate (Figure 2). 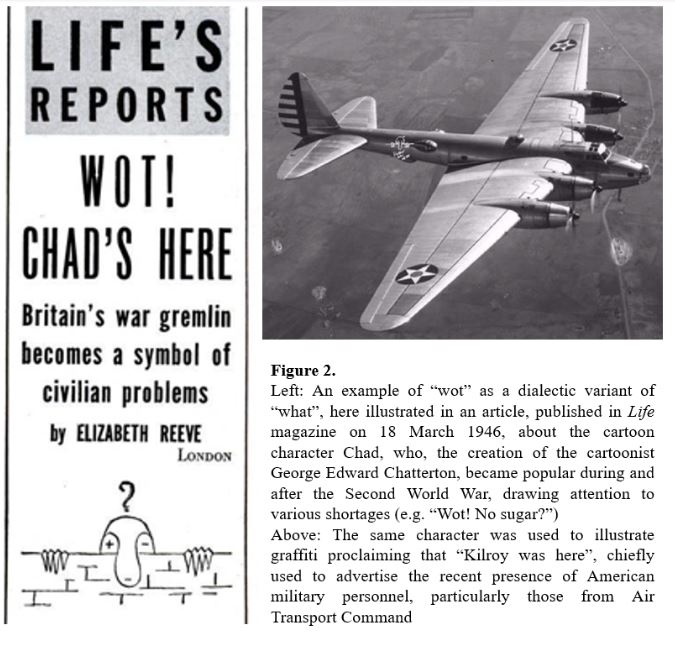 The spelling of “hwæt” tells you how it was pronounced. First an aspirated |h|, then the voiced bilabial |w|. The digraph |æ|, called aesc, is pronounced like the flat a in ash.

The Chambers Dictionary (12th edition, 2011) includes about 150 headwords beginning with wh-; almost all are pronounced (h)w; for example: what (descended from “hwæt”), when, whither, whop, whup, and why. There are two groups of exceptions:

Which brings me to whooping cough and a question that recently appeared on Twitter:

The sound that you hear in this condition was originally called a hoop, which is what it sounds like—a long intake of breath after a series of short violent coughs. The first instance listed in the Oxford English Dictionary dates from 1811, in Robert Hooper’s edition of Quincy’s Lexicon-medicum, under Pertussis: “The cough … is attended with a peculiar sound, which has been called a hoop.” “Hoop” in this sense antedates the use of “whoop” by about 200 years.

The OED first attests the two different spellings of the name of the disease in quotes from 1739 (“whooping cough”) and 1758 (“a hooping, or any nervous cough”). But I have found an antedating, from 1701 (Figure 3), which gives “hooping cough” precedence. 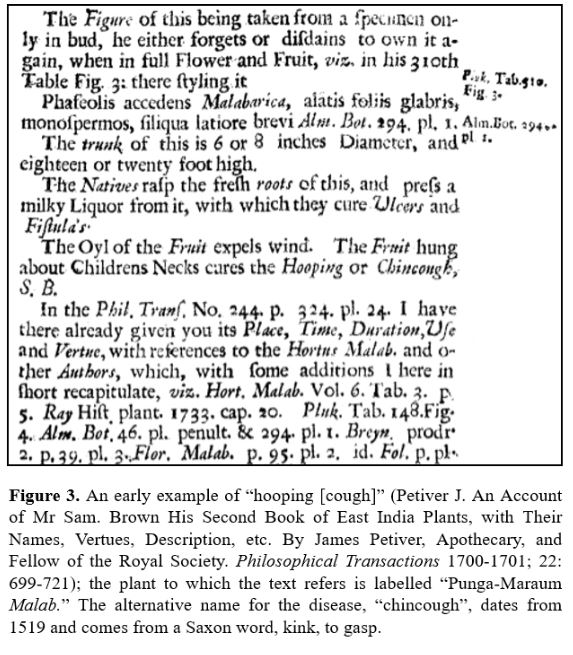 So “whooping cough” is pronounced, like who, whose, and whom, with an initial h, just as it is given in the OED: /ˈhuːpɪŋkɒf/

But, given the history of “hwæt”, perhaps it is not surprising that the Twitter comment about this ended with the exclamation “What the what!??”.