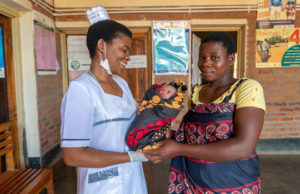 Women and girls make up half of the world’s population, and half of its potential. The pivotal role they have in global socio-economic development is widely acknowledged, as is the crucial importance of ensuring that they have equal access to health and education as a means to reaching their full promise in contributing to societal goals.

Gender equality is a fundamental human right, enshrined in the UN’s founding Charter, with 143 out of its 195 member countries guaranteeing equality between men and women in their constitutions as of 2014. [1] Despite this, the stark reality is that women in many parts of the world face unequal access of opportunity to decision-making, leadership roles, employment, education and healthcare. As highlighted by the UN Secretary-General, António Guterres, achieving gender equality and empowering women and girls is the “unfinished business of our time, and the greatest human rights challenge in our world.” [1]

The most compelling evidence of the inequalities that define women’s lives is to be found in the area of maternal and reproductive health care, and WaterAid has long recognised this. In 2016, photographers working for WaterAid took a peek inside the maternity bags of expectant mothers around the world. [2]  These powerful pictures of the items mothers-to-be take to hospital ranged from 21st century luxuries to essential items, but revealed a poignant fact—the decision on what to take is in part dictated by whether the hospital has clean water.

WaterAid’s response has been to put women at the centre of their work. In Malawi, for example, the charity has worked with women, partners and the Ministry of Health to deliver access to sustainable water, sanitation and hygiene (WASH) services to ensure a safe and clean delivery environment for mothers and babies, reducing the risks of WASH-related illnesses and improving dignity.

Empowerment underpins all this work by collaborating with women’s groups to build their capacity to advocate for safe motherhood and newborn care. At the same time, WaterAid worked with healthcare facility advisory committees to strengthen accountability and link the women with service providers, so grievances are properly addressed and the quality of services continue to improve.

WaterAid’s tireless efforts towards equity of access to WASH in maternity services for all women, everywhere, was given a further boost by the recently published conclusions of the What Women Want campaign. [3]

An unprecedented, unique, “one-woman-at-a-time” enquiry, it aimed at giving a million women a voice, exploring their top priorities in terms of better maternal and reproductive health services and bringing those demands to the attention of health policy leaders around the world. Inspired by a grassroots evidence-gathering exercise initially carried out in India, the project evolved into a worldwide enquiry during 2017 to 2018, with women across 114 countries invited to share their lived experience and offer their views on how their care could be improved.

Water, sanitation, and hygiene ranked second in the top 20 demands for “quality maternal and reproductive healthcare” from women and girls around the world, and was among the top three demands from every age group ranging from 15 to 19 year olds to women over 55 years.

In 2007, this journal marked the launch of its new format by asking readers to nominate the most important milestones since the forerunner of The BMJ was first published in 1840, and then to vote for what we thought was the most important milestone from a field of 15, selected from the first round of nominations. The conviction of the Viennese doctor Ignaz Semmelweis in 1847, that the disease that caused puerperal fever in women was being carried on the hands of medical students and his insistence that the students should wash their hands before attending deliveries, made it into the shortlist. [4] But the clear winner, with more than 11,300 of us readers participating in the voting, was the introduction of clean water and sewage disposal—“the sanitary revolution”—as the most important medical milestone since 1840. [5]

Readers of The BMJ are already convinced of the paramount importance of WASH for better health, and that no aspect of healthcare can be improved until safe water, sanitation and hygiene are the basic platform on which the service is built.

In Semmelweis’s hospital, hand washing resulted in mortality from puerperal sepsis among patients who came into contact with the students falling from 12% to 2%. [4] Yet, nearly 200 years later, this right is denied to hundreds of mothers across the world, with tragic consequences. A million women have spoken and the message is clear. Let us join forces with WaterAid to help make safe water, sanitation and hygiene integral to maternal and reproductive health care for women everywhere.