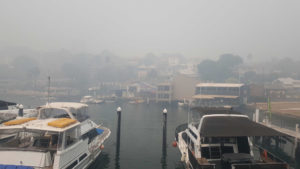 I hang the last tiny-koala-in-a-Santa-hat on our family Christmas tree when the call from Sydney comes in. My colleagues are coughing. They are also sneezing blood. Their local coffee shop on the other side of Kirribilli harbour is shrouded in mist. Except that isn’t mist, it is smoke from the bushfires circling Sydney. It is still only spring; the real fires will come later. Australia is literally baking.

Koalas will burn this Christmas. They are not yet “functionally extinct,” but singed fur and charred bodies have been encountered. The poor dears are not equipped to run from danger; the best they can manage is to climb gradually further up the tree they are on, and then nod off again. This is not much use with the current fire storms which are hotter than usual and produce sparks that fly long distances.

If the flames don’t get Australia’s favourite marsupial, habitat loss will (this is their biggest threat, the next biggest are chlamydia and getting run over by cars). Almost none of their habitat is protected. But what does that matter when exciting reality TV shows, like Aussie Gold Hunters, show competitive teams of diggers rip up the bush? Or while the Australian government have just approved the development of a massive new coal reserve in remote Central Queensland, which is set to hugely increase Australia’s coal exports. Koalas may be adorable, but they are neither macho nor glitzy enough for reality TV or our sustained attention. The other inhabitants of the eco-system—scrubby trees, millipedes and unicellular organisms—stand little chance of public attention. Way too boring. 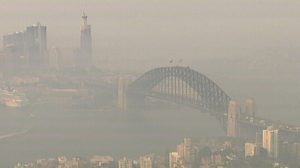 My daughter visited the UN Climate Change Conference COP25 in Madrid and reported “many speeches but not much action.” The New Scientist called it a “staggering failure of leadership.” Just as Nero fiddled while Rome burned, our leaders (and we) seem too distracted by economic growth to do much than talk and tweet. Are tweets the equivalent of Nero fiddling while Rome burned?

My doctor mother recalled the 1952 Great Smog of London, when over five days she could not see to the end of her Nightingale ward. Each morning a thin film of brown sticky stuff covered all the surfaces and nurses would diligently wipe it away (that was what nurses did then). A combination of chemistry and weather had turned the atmosphere into a haze of sulphuric acid. Thousands of people died. It led to Britain’s very useful Clean Air Act of 1956.

We don’t see “pea-soupers” any more in London, but our air is killing us. Her bereaved family await a second inquest on the asthma death of Ella Kissi-Debrah. Public Health England lists air quality as a top ten priority. We have a 220 million Clean Air Fund to tackle roadside emissions. All are steps in the right direction but, like koalas, too small and slow. By the time we get to the end of the coal and oil and gas and gold, our furry friends will be long gone, and we will follow, because we are also too slow.

This is the timeline. Next Christmas our children will say “Oh look Mum at the poor singed Koalas.” Around 2050 they will hang little furry toys on a recycled Holiday Tree and ask “What’s a koala?” In the distant future they will be silent.

Mary E Black is a public health doctor. She is on Twitter @DrMaryBlack

Competing interests: I am a Non-Executive Director of the UK’s National Centre for Atmospheric Science.