Phlebotomy is the process of letting blood, originally by incising a blood vessel and nowadays by puncturing it. Early papers on phlebotomy refer to the curious habit of hepatic phlebotomy, introduced by George Harley in the 1880s to relieve engorgement of the liver in acute hepatitis. But nowadays it refers only to obtaining blood from a peripheral vein.

In his Indogermanisches etymologisches Wörterbuch (Indo-European Etymological Dictionary, 1959), Julius Pokorny listed several entries for the IndoEuropean root BHEL. The fourth entry in the sequence means to bloom or come into leaf. It has an metanalytic (letter reversal) form, BHLĒ, with an o-grade form, BHLŌ, and a zero-grade form, BHLƎ.

From BHLŌ we get words such as blow, bloom, and blossom, blade, and blood, the last from the idea that it spurts out like a blossom from its bud. And from BHLƎ we get bless, which originally meant to mark with blood or sacrifice, and therefore to consecrate.

Consonantal shift of BH to φ (ph) or f gave blooming words in Greek and Latin. Greek ϕῦλον, a race, tribe, or class, gives us phylum and phylogeny. Podophyllum, the name of a genus of plants from the Berberidaceae family, is thought to be a contraction of anapodophyllum, literally “having leaves like a duck’s foot”.

From the Latin word folium, a leaf, we get foil, folio, and foliage, portfolio, trefoil (the three-leaved clover or shamrock), quatrefoil (any four-leaved flower or shape), cinquefoil (the five leaved Potentilla reptans and Comarum palustre), and milfoil (the many-leaved Achillea millefolium). Flos a flower, gives us floral, floret, florid, florist, flour, flourish, and effloresce. The coin called a florin was originally stamped with a picture of a lily.

The word phlebotomy is surprisingly old. It can be found in Attic Greek, φλεβοτομία, from φλέψ, a vein, and τέμνειν, to cut. In English it dates from the start of the 15th century. Pokorny and other sources do not mention the IndoEuropean origin of the Greek, but two associations suggest a possibility: first, the origin of the words phlegm, phlogiston, and the bright-coloured phlox from another variety of BHLŌ, meaning to shine, flash, or burn; secondly, the connection with blood. I therefore suspect that φλέψ comes from one or other form of BHLĒ.

Over time the method of phlebotomy has changed. The historical evidence shows that until the 20th century phlebotomists would insert needles into peripheral veins pointing distally, away from the direction of the heart. The point of this is that, as William Harvey showed (Figure 1), blood flow in veins is from distal to proximal, with valves that prevent the blood from flowing backwards. If you insert a large needle into a small peripheral vein the needle will occlude the lumen and prevent blood flow; if the point of the needle faces proximally no blood will enter the needle, since the flow from distal to proximal will have been blocked; in contrast, if the point of the needle faces distally, the blood on its way back to the heart will find its way into the needle and flow easily. 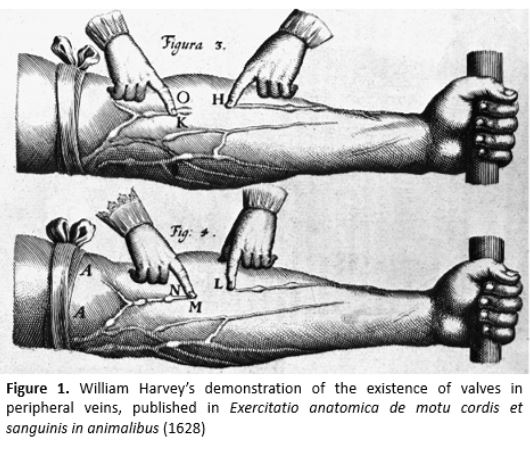 However, in the early 20th century the advent of finer needles and frequent use of the median antecubital vein reduced the importance of the direction in which the needle punctured the vein, and the proximal approach became routine. But if you are forced to use a small vein, size matters, and the distal approach remains the preferred method (Figure 2). 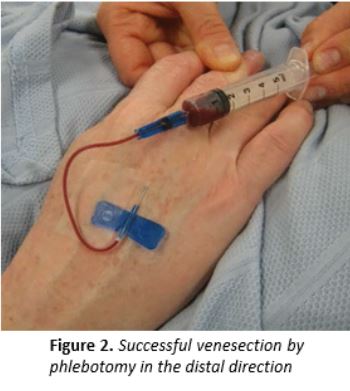 Venesection (cutting) and venepuncture (puncturing) are synonyms for the different meanings of phlebotomy. “Venesection” is first recorded in the Oxford English Dictionary in a citation from 1661 and “venepuncture” from as late as 1923, although there are several earlier instances. For example in a paper published in The BMJ in 1910 the author, Colonel C Birt, wrote that “we obtained blood by venepuncture in 28 cases”. He might have written “phlebotomy” instead, but his subject was “Phlebotomus or Sandfly Fever”, which may explain his preference for “venepuncture”. Phlebotomus is a genus of sandflies of the family Psychodidae, vectors of diseases such as leishmaniasis and sandfly fever. The viruses they carry are called phleboviruses.

Wondering which of these synonyms is used more commonly, I searched PubMed (Figure 3). Surprisingly, although in ordinary conversation we would generally talk about venepuncture, in written texts phlebotomy wins out by a long way. 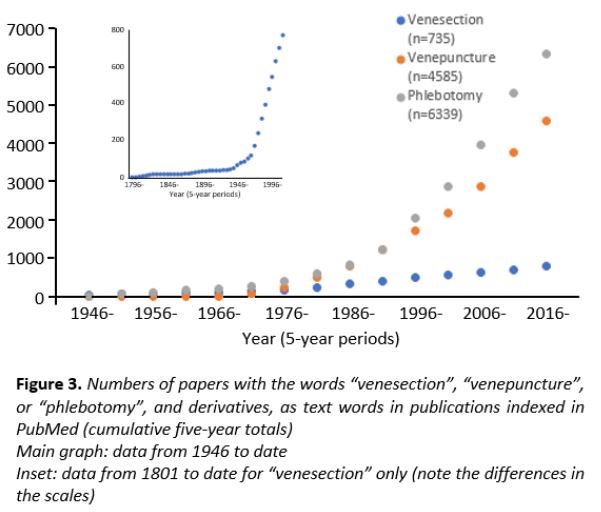 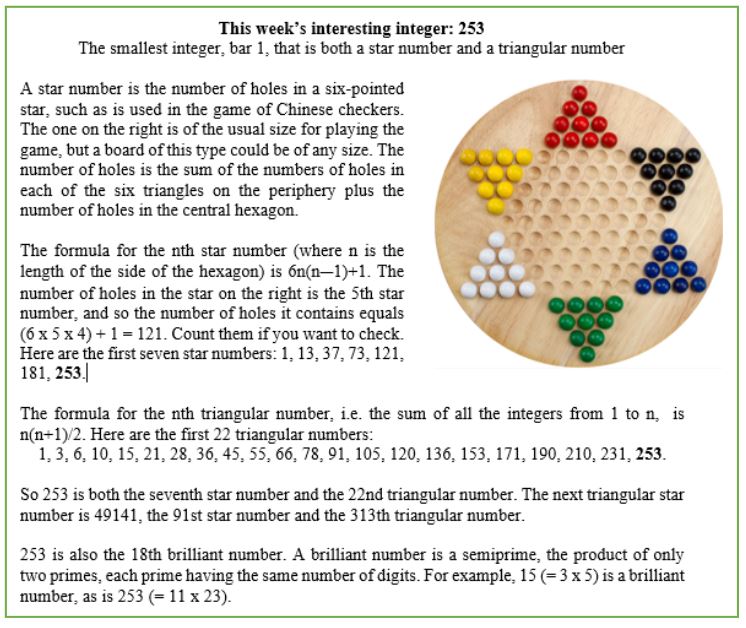