My godfather, George, left the UK several decades ago for a new life as a dentist in Canada. In conversations regarding death, George openly discussed taking his own life before the symptoms from a terminal disease became unbearable. Unbeknown to me he had even researched and purchased the means for doing this. Owning such a “medical aid for dying” could be prosecuted under the Suicide Act in the United Kingdom.

At the beginning of this year George was diagnosed with acute myloid leukemia (AML). Aged 82, with diabetes, mild heart failure and only 18% of his renal function remaining, his prognosis was extremely poor. At best chemotherapy might prolong his life by a few months, but at the expense of serious side effects, and due to the cancer he would be ineligible for dialysis. In an email to his family and close friends he informed us of his diagnosis and his decision not to start chemotherapy, which he said came easily. His doctors predicted his remaining life expectancy as “months” rather than “years”, and based on this he invited all email recipients to visit him over the next few months whilst his symptoms were well controlled. He then planned to use his right as a Canadian citizen to have medical assistance in dying (MAID) at a time of his choosing.

On 17 June 2016, a bill to legalise and regulate assisted dying was passed in Canada’s Parliament. Both self-administered MAID and physician-administered MAID were legalised to allow an end to suffering for terminally ill adults who request it voluntarily and can give informed consent. Medical assistance in dying is not available to minors, nor on the grounds of mental illness, long-term disability, or any curable condition. Under these terms George was eligible.

George enjoyed the company of many family and friends visiting him over the two months following his diagnosis. He did not require strong palliative medicines and remained mentally coherent allowing us all to reminisce about the good times and say our final goodbyes. After two months his breathlessness worsened to such an extent that he feared the night-time as he felt like he was “drowning”. After enduring this for a week, and with little help from altering and adding in medication, the next level of care would have been transferring him to a hospital or hospice. George always wanted to die at home surrounded by his closest family, without the need for “drips, drains or being attached to machines”. He contacted his GP and brought his MAID date forward to the end of the week. Despite a difficult final day, he rallied in the evening, and came down to eat his favourite meal of Hungarian porkolt with red cabbage, with champagne and fine wines with his life partner Marie, his two sons, and three other members of his close family. The doctor arrived as George enjoyed and indulged himself in hitherto forbidden chocolate cake, due to his diabetes, at the end of the meal. Uncle George then stood and toasted them all with the final words “That was a great meal….. and a great life! Thank you!”

George and the doctor retired to his bedroom, and after the final confirmation of consent, George underwent his medically assisted death while holding the hand of his beloved Marie, according to his wishes.  All present agreed it was a very peaceful and dignified way to die, avoiding any severe suffering for either George or his family, whose last memories of him might otherwise have a been of a prolonged and painful death.

The dignified process of George’s death has changed my view from ambivalent to now strongly supporting the right to a medically assisted death in line with the regulations defined in Canadian law. During my final conversation with George, six hours before his death, he asked me to share his story with the wider community in the hope of swaying opinion in support of a change in UK legislation in voluntary euthanasia. George described the 2016 change in the medically assisted death bill as Canada’s “final generous gift” to him from the country that he loved. 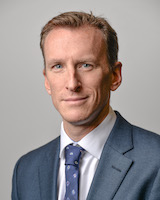 Anthony Barabas is a dual-trained Plastic and Hand Surgeon based at Hinchingbrooke Hospital, part of the North West Anglia Trust.