To expire originally meant what it means literally, to breathe out. It comes from one of several IndoEuropean roots meaning to breathe:

From the IndoEuropean root SPEIS comes the Latin verb spirare, to breathe. It gives us words such as spirit, spiritual, and sprightly, and the French loan phrase esprit de corps. The English verb to spire, to breathe, is first recorded in Wycliffe’s 14th century translation of a verse in Ecclesiastes, Chapter 43: “In his wil shal spiren, or brethen, out the south” (“At His will the south wind blows”). This meaning of “spire” is now obsolete, but adding prefixes produces many derivatives: aspire, conspire, inspire, interspire, perspire, respire, sospire, suspire, transpire. The prefix ex, Latin for “out of”, displaces the s of spire, leaving expire. 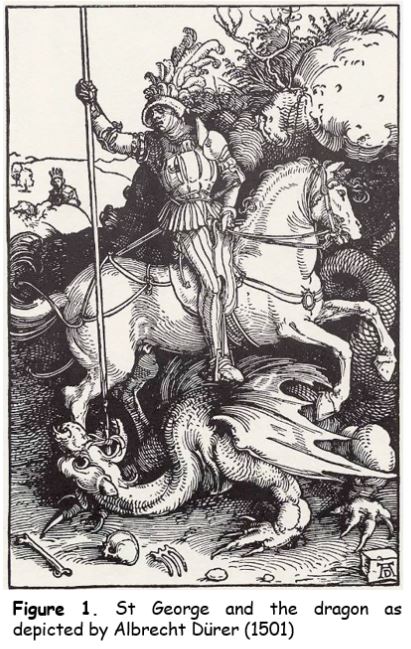 Expire, to breathe out, is first recorded as such in 1590 in Spenser’s Faerie Queene: “To saue his bodie from the scorching fire, Which he from hellish entrailes did expire”, a description of St George’s encounter with the dragon (Figure 1). It then developed extended meanings, such as to give off a perfume or to emit lava from a volcano. And the ultimate extension is to breathe out your soul in the act of dying. This was then transferred to other things that might come to an end, metaphorically dying, and hence expiry or expiration dates.

Of the two nouns from the verb expire, expiry and expiration, the latter is the older, by about 250 years. When it first appeared in the early 16th century it meant breathing one’s last, death, and soon after came to be applied to anything that came to an end. It is not surprising that “expiration” is the dominant form in America; the Pilgrim Fathers had long since sailed, taking “expiration” with them, when “expiry” entered English in the 18th century.

Expiry dates for drugs are based on comprehensive stability data, which regulatory agencies require for market authorization. In the USA this is done in accordance with guidance issued by the International Council on Harmonization (ICH), and the European Medicines Agency has issued related guidelines.

Expiry dates typically vary between one and five years and are usually based on conservative estimates. The main concern is that the product may degrade, reducing the effective dose and possibly resulting in the formation of toxic compounds. This was reported as early as 1963, when acquired Lignac–De Toni–Fanconi syndrome, with polyuria, polydipsia, glycosuria, aminoaciduria, hyperphosphaturia, and hypercalciuria, was described in patients who were given outdated tetracycline formulations; this was thought to be due to degradation to toxic products (epitetracycline, anhydro-4-epitetracycline, and anhydrotetracycline). When the compound exists as an equal mixture of two stereoisomers, with different degrees of efficacy, conversion of one to the other may alter efficacy. This has been reported in the case of adrenaline (epinephrine), which has two isomers, L(-)-adrenaline and D(+)-adrenaline, the former being more potent. And for some products the storage conditions (e.g. refrigeration) are important.

A search for “expiry/expiration date/s” in titles in Pubmed gave 150 hits. Most are about medicinal products, either in general (53) or naming specific medicines (17), mainly vaccines or antisera (4) and adrenaline (5), but also bleomycin, fluphenazine, ftorafur, and medical gases. Other items include foodstuffs (11), resins (8), blood products (5), and devices (3).

The authors of a systematic review suggested that it is reasonable to allow expiry dates to be extended beyond five years for a large number of drugs, and they reported individual cases of up to six years. The problem lies in deciding which medicines would qualify for extension.