Air bubbles within ice cores deep within the Antarctic and Greenland ice sheets are tiny time capsules. From this air we can measure the composition of atmospheric gases continuously from 750,000 years ago to the present day.

The data from Antarctic and Greenland ice cores show that, during periods of glaciation such as the last Ice Age 20,000 years ago, the CO2 concentration is always around 180 parts per million (ppm). And between ice ages it is regularly about 280 ppm. Coming out of the ice age and into the “interglacial” took around 10,000 years, and saw global warming of ~4°C and the sea level to rise by over 120 m world-wide.

Fairly simple physics, first proposed by Eunice Foote in the mid-19th Century (an often overlooked female scientist), shows that this CO2 difference—100 ppm—is sufficient to cause the warming necessary to end an ice age.

In 1850, the level of CO2 was around 280 ppm, as it had been for the previous 10,000 years—delivering a very stable climate period over which our civilisation developed. Since then, however, due entirely to the industrial production of CO2 from burning fossils fuels (coal, oil and gas) the CO2 level has increased to over 400 ppm. Indeed it has increased by around 100 ppm in the last 50 years (it took the world 10,000 years to do this naturally). The world has already warmed by ~1°C since 1850 and sea level has risen by ~20 cm.

The last time the world experienced 400 ppm of atmospheric CO2 was around 5 million years ago—the Pliocene—when global temperatures were 4°C warmer than today and sea levels 20 m higher. This is the future that awaits our world unless we reduce greenhouse gas emissions to zero as soon as possible.

If we simply keep burning fossil fuels in the way have for the last 50 years—increasing year on year—then by the end of this Century the level of CO2 in the atmosphere will be 1000 ppm. The last time that occurred on Earth was 55 million years ago, when temperatures were 8°C higher and there was no ice on the planet, so sea level was over 60 m above today’s level.

These simple comparisons are worrying, but they only tell half the story. Not only is it important to understand the maximum levels of past changes, but also how quickly the Earth has changed in the past. 55 million years ago it took around 20,000 years for the atmosphere to reach a CO2 concentration of 1000 ppm—very quick geologically. We appear to be replicating this change in less than 100 years—that’s instant in geological terms. The pace of climate change that we are responsible for has no analogy in the geological record. It is fair to say that climate has changed naturally in the past at the levels we are experiencing, but not at the present rate of change.

While it may be possible for human beings to live within a world 8°C warmer than today, it’s worth remembering that our society has been developed in a climatically stable world in the last few thousand years. Our “human world”—our borders, cities, roads, farms etc—will not be able to exist in the same way under 8°C of global warming. We are unwittingly performing a dangerous experiment—how will our human world react when we alter the climate substantially and at break-neck speed? This is not an experiment we should be undertaking, and yet we are.

It is scientifically undeniable that change is happening because we have burned fossil fuels at an industrial scale since 1850. And that the rate of change is more than 10 times higher now than at any time in at least the last 55 million years. This is why I am very worried about our future and why we must change the way we live on this planet. By the middle of this century, none of us should be emitting greenhouse gases, and many of us need to make that transition much earlier. We can make the changes required, but every year we delay them the problem gets worse and the upfront costs involved increase. To paraphrase a Chinese proverb, the best time to act was 20 years ago and the second best time is now. 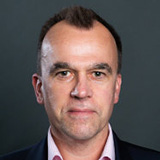