As this year’s party conference season comes to a close, what have we learned about the main parties’ priorities for health and social care? Richard Murray weighs up the key commitments, from funding and the NHS workforce, to social care reform

This year’s party conference season has been unusual for many reasons. The obvious focus on Brexit is one of these. But given that pretty much everyone thinks we are close to a general election, they were also a chance for the parties to trail some of the non-Brexit commitments with which they hope to entice the electorate. What stood out for health and social care?

The Conservatives are the current party of government. This means that a lot of their intentions are already in the public domain—whether the £20.5 billion real-terms spending commitment, the NHS long-term plan or the prevention green paper. They added to this a commitment to provide £2.7 billion for six hospital rebuilds (with a further 34 schemes to be worked up) and a Health Infrastructure Plan that commits to a five year rolling programme for investment. This is clearly good news for the hospitals concerned and their patients—but this plan did not include a commitment to overall NHS infrastructure spending. Until we have that, we cannot tell if the new schemes are the first down payment to overcome the severe NHS maintenance backlog and invest in, for example, better premises for general practice and mental health—or if they in fact come at the expense of these other priority areas.

The prime minister has again said the Conservative Party would solve the problem of social care, but again has not said how, a silence that will not be credible for much longer. Instead it is the Labour Party that has set the pace on fundamental reform of social care for older people. First, their policy document commits to (and costs) introducing free personal care (as in Scotland) and adds in a cap on lifetime spending, but does not immediately cover working age adults. Even so, this is the kind of fundamental reform many have been waiting and arguing for. Second, Labour promises to improve the working lives of social care staff, with measures ranging from ending zero hours contracts to supporting professional development. This may sound intuitively like the right thing to do but will be expensive given the current low pay in the sector. Finally, they intend to encourage greater public sector provision of social care, where the devil will lie in how this is done and how quickly.

The Labour Party also set out two other eye-catching commitments. The first means England will follow other countries of the United Kingdom in abolishing prescription charges (the Liberal Democrats propose abolishing them for people with mental health conditions). The second was an explosive mix of compulsory licensing for some new medicines alongside establishing a public sector medicines company to manufacture drugs (among other changes). England is struggling both with the prices of some new medicines and repeated rounds of shortages in many older medicines, shortages that have just led the current government to ban the export of some products. So while it’s hard to know if Labour’s radical prescription is right, it’s not hard to diagnose that there is something wrong with the current medicines market.

Summarising the Liberal Democrats health and care policy is more challenging as it runs to 49 pages of detail. As we might expect there are new commitments to improve mental health services (including more waiting times targets); action on public health including on air pollution and fast food; support for carers; same-day phone or video appointments at your own GP practice; one pence on the income tax to provide an additional £6 billion for health and social care; and a cross-party commission to set a funding settlement for the long term.

Both the Liberal Democrats and Labour make proposals to confront the deep workforce crisis in health and care (remembering the new NHS People Plan is currently under development). Both look to bring back bursaries for nurses (with the Liberal Democrats starting with mental health nurses), and Labour commits to training more GPs too. The wider package of measures from the Liberal Democrats also includes a new EU recruitment campaign, support for social care staff and, in a clear nod to the disappointingly repetitive pattern of workforce crises in the NHS, they would add a new duty on the Secretary of State to produce an annual workforce report and plan. Labour also look to the law by legislating on safe staffing.

The temptation to turn to the law crops up in other places. While we expect the Conservatives to back the targeted package of legislative change proposed by NHS England (supported by a range of bodies, including The King’s Fund), the other parties are more radical. Labour intend to repeal the 2012 Health and Social Act. As it is not possible to turn back the clock in any simple or straightforward manner, it’s difficult to see how this would not represent a wholesale re-organisation of NHS structures. The Liberal Democrats are scarcely less radical, proposing to pass the commissioning carried out by clinical commissioning groups over to local authorities and generally strengthen the hand of local democracy. This leaves both main opposition parties proposing major structural re-organisations despite the painful experience of the 2012 Act and its many predecessors.

The manifestos and ensuing campaigns will of course see the parties fill out their commitments. To allow the electorate to make informed choices, we think this should include a transparent statement on future funding. But beyond that, if the parties want to meet the health and care challenges facing this country, they need to deliver on the fundamental reform of social care so long overdue; confront the workforce crisis; set out a range of measures to improve public health; and support—or at least not distract from—the current efforts of the NHS and its partners to better integrate care. The signs from the conferences are that the parties do intend to make health and social care a key feature of their campaigns. The risk, of course, is that none of this will be heard over the shouting about Brexit. 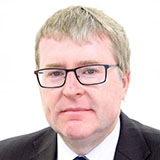 Richard Murray is chief executive of The King’s Fund.