Last week, exploring the origins and ramifications of the words “thyme”, the plant, and “thymus”, the gland, I noted that they probably came from different Greek words.

The name of the plant may come from the Greek word θῡμός, the soul or spirit, also connoting courage, which some have suggested the plant inspired. Alternatively, its distinctive odour may have prompted a connection, as Plato suggested, with the verb θύειν, to burn or perform a sacrifice, a procedure commonly associated with the use of incense, or θῡμιᾱμα, which, as tymyame, is in Wycliffe’s Bible of 1382 (Ezekiel xvi:18).

These diverse origins result in five different uses of the prefix thym- or thymo-: in reference to the plant or its constituents, the gland, sacrifice and incense, something odoriferous, or something to do with the mind. From the Oxford English Dictionary (OED) I have distilled about 60 words starting with thym-; in Table 1 (see the end of the article), for clarity, I have divided them according to these different uses. About half relate to the plant and substances derived from it, 35% relate to the gland, and the rest relate to the other three meanings.

Only two of these words relate to the mind, thymoleptic and thymopathy. The latter means any disease of the mind, but has also been used to mean a disease of the thymus. Neither of these seems to have been widely used; in both cases the OED gives only two examples, both from other dictionaries. However, PubMed contains 17 examples, 13 of them on psychiatric subjects. The earliest dates from 1953 in the title of a paper in Spanish, “Contribucion al estudio de algunos procesos cutaneos como sintomas de una timopatia ansiosa”, translated into English as “Studies on certain cutaneous processes as symptoms of thymopathies”; this seems to refer to diseases of the thymus gland. In contrast, a Portuguese paper from 1969, “Timolepsia com a monocloroimipramina”, translated, perhaps inaccurately, as “Thymopathy with monochloroimipramine”, appears to refer to treatment of a psychiatric condition with monochloroimipramine, assuming the accompanying MESH terms are reliable, although it might also refer to an adverse reaction. Other papers refer to “anxious thymopathy” and “thymopathic hypomaniac remission”, and one author distinguishes “logopathies” (“all forms of schizophrenia, paraphrenias and paranoias”) from “thymopathies” (“affective disorders and the so called ‘anxiety disorders’”). The most recent example is from 2017. So the word is far from obsolete, although all the examples come from foreign authors.

The OED defines “thymoleptic”, literally “mind-seizing”, as “(Of or pertaining to) a psychic energizer”, a rather old-fashioned definition. “Psychic energizer” it defines as “a psychostimulant or antidepressant”, the first citation coming from 1957, although I have found an earlier instance, in a 1955 annual report of the Colgate–Palmolive Company, referring to phenelzine, a monoamine oxidase inhibitor (MAOI): “Catron, a psychic energizer”. Instances in PubMed refer to various medicines, including other MAOIs (iproniazid and isocarboxazid), and deanol (dimethylaminoethanol) and sydnocarb, both described elsewhere as psychostimulants. The term “psychic energizers” therefore appears to apply to medicines that we now call psychoactive, a term that was first recorded in 1958, or psychotropic (first recorded in 1956, at the same time as phrenotropic). 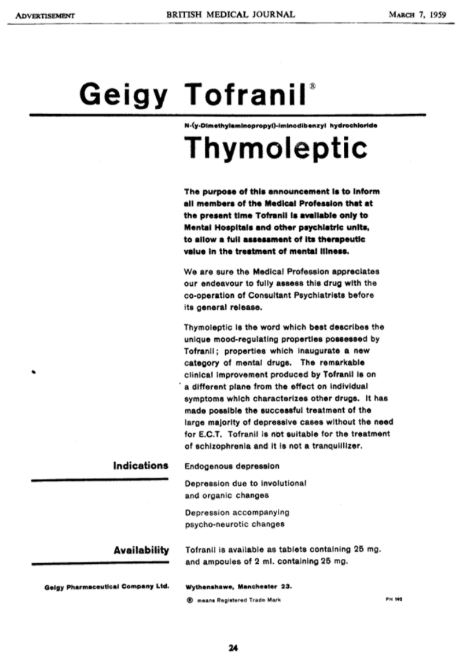 Figure 1. An advertisement for the first tricyclic antidepressant, imipramine; the text reads “Thymoleptic is the word which best describes the unique mood-regulating properties possessed by Tofranil; properties which inaugurate a new category of mental drugs”; typically for the time, the company did not specify what those “unique” properties were

As Richard Green, Peter Haddad, and I discovered when we surveyed advertisements in The BMJ for pharmaceutical products, what has been called the “psychopharmacology revolution” began in the 1950s, as reflected in these early citations. One of the earliest medicines to be specifically labelled “thymoleptic” was the tricyclic antidepressant imipramine, first discovered in 1951. It was so described in an advertisement in March 1959 (see Figure 1), antedating by 9 months the earliest citation in the OED. Furthermore, a search for the term in Pubmed and other databases yields even earlier hits in other languages, such as German (Thymolepticums) in 1958 and earlier still, in Spanish (timolepticos), in 1952. Earlier instances may be waiting to be found.

Table 1. Words beginning in thym- as listed in the OED