Across Africa, millions of lives have been changed for the better by universal health coverage, but the work is far from complete, says Paul Kagame, president of Rwanda 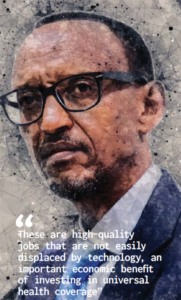 Achieving universal health coverage by 2030 is Africa’s top strategic objective in health, as defined by the African Union in the context of Agenda 2063. The Sustainable Development Goals include the very same target. There is also a clear framework for measuring progress.

The World Health Assembly in 2018 was an opportunity to recall that these developments have created an unprecedented political opportunity to anchor the past generation’s tremendous global public health gains in national health systems that are both sustainably financed and people centred.

Around the world, the greatest variation in health systems is in service capacity and access. Africa lags furthest behind with insufficient personnel and facilities to deliver universal health coverage.

The data also show that catastrophic out-of-pocket health expenditures are an increasing source of impoverishment in Africa—though not yet to the extent seen in other regions. However, that may simply reflect the fact that many life saving procedures are not yet widely available on our continent. As service coverage in Africa expands, the financial risks for citizens will also increase unless adequate protection measures are in place for the most vulnerable.

Whenever countries have put universal, community based primary health systems in place, the results have been positive. For example, in Rwanda, a combination of community based health insurance, community health workers, and good external partnerships together led to the steepest reductions in child and maternal mortality ever recorded.

The key was an approach that put individuals and communities at the centre of care. In choosing this path, Rwanda learned from others who preceded us in the community based approach, such as Ethiopia. We also benefited greatly from advice and support from the World Health Organization and other partners.

Integrating digital applications and new technologies into our health system has also made a difference. An example is the use of drone aircraft to quickly deliver blood and medical supplies to rural hospitals.

More than 90% of Rwandans are enrolled in health insurance today, and two thirds of the costs are covered by contributions from beneficiaries, with the government subsidising the remaining one third.

At the same time, we continue to expand our network of volunteer community health workers, who are present in every village and serve as an essential link between the population and health facilities.

Universal health coverage is affordable for countries at every income level, as examples from all over Africa show. Ghana, Kenya, Morocco, and Senegal all offer a subsidy to insurance. Ethiopia is a pioneer in the use of community health workers as the frontline of primary healthcare, and Ghana is also deploying them with success. In Tunisia, we have seen an effective example of the importance of involving citizens in the planning and evaluation of health provision.

In many cases, these programmes can be scaled up using national resources, even as direct partner funding addresses other important health needs.

An added benefit is the attitude of future-mindedness and entrepreneurship that universal health coverage helps to unlock. People are more free to plan for the future with confidence. For example, families can invest the savings in businesses and in better quality education for their children.

The International Labour Organization estimates that Africa’s health economy workforce has a shortage of almost 17 million workers in both health and non-health occupations. Under universal health coverage, the number of unfilled jobs is projected to increase by another nine million by 2030. Half of the funding needed to achieve universal health coverage by 2030 will go to training and employing workers in the health sector.

These are high quality jobs that are not easily displaced by technology, an important economic benefit of investing in universal health coverage.

Building the health workforce of the future can also radically transform women’s lives, with benefits for all. One quarter of the health workforce globally consists of unpaid labour by women—particularly long term care. But this labour is not really free. It comes with tremendous opportunity costs, as tens of millions of women forego employment.

Resources undoubtedly matter and the world has come together to do the right things. That includes government donors, and also transformational philanthropies, such as the Bill and Melinda Gates Foundation, as well as fellow organisations such as the Global Fund, and Gavi, the Vaccine Alliance, and the World Health Organization, which is as essential as ever.

The G20 also has a useful role to play in keeping universal health coverage high on the global development agenda and advocating for continued investment.

After all, universal health coverage is an opportunity, not a burden, in every respect.

Paul Kagame has been the president of Rwanda since 2000. Twitter @PaulKagame