From time to time someone writes asking me to explain some aspect of punctuation. Recently I have been asked to arbitrate between “sub-group” and “subgroup”. I prefer the latter.

The word hyphen comes from the Greek ὑϕέν, a portmanteau word formed from uniting ὑπό, under, with ἕν, one. But why should “hyphen” mean “under one”?

Classical Greek and Roman texts and inscriptions were generally written in “scriptio continua”, in which words were written in upper case, without spaces, diacritical marks, or punctuation. In order to show that two words were actually to be read as one, an arc was inserted underneath the junction of the words, as in the picture below. 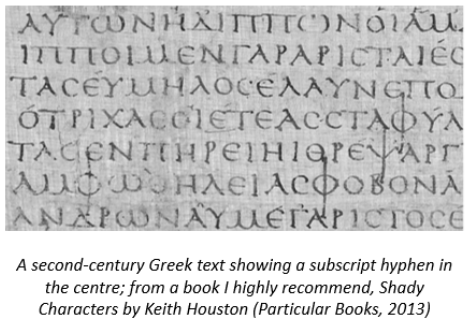 To understand the need for such a symbol, consider the difference between “a red, hot poker” (a hot poker coloured red) and “a red-hot poker” (a poker that is very hot). The punctuation resolves the ambiguity. The subscript (or sublinear) hyphen was also used, by the first century, to indicate that a syllable in a word should be sung to more than one note, whereas previously that had been indicated by duplicating the syllable.

However, when Johannes Gutenberg started to produce printed texts in the middle of the 15th century, using preset blocks of typeface, he had no way of printing separate sublinear symbols and so he raised the hyphen into the line. He typically used hyphens, printed as slanted equals signs, to split words across lines, as the picture below shows. 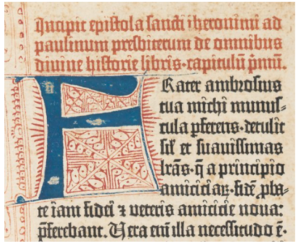 There are broadly speaking two types of hyphens, the link or hard hyphen and the break hyphen. The link hyphen is inserted between two words that are united in a compound word, such as fail-safe, fast-forward, and force-feed. When a noun is used attributively to qualify another word the two may be joined by a hyphen, as in breast-stroke and placebo-controlled. This can also happen in other cases, such as when two nouns are conjoined, as in drug-drug or drug-food interactions. The break hyphen is used to split words over two lines. At one time The Chambers Dictionary used two such types of hyphen, an ordinary hyphen (-) to indicate the splitting of a word that was not normally split and a double hyphen (=) to indicate that the hyphen belonged to the word; this convention was abandoned in the 9th edition. Deciding where to split a word, whether according to its syllabic components or pronunciation, can be problematic. I have seen “sleeplessness” split after “slee-” and “searched” after “sear-”.

So how do we solve the problem of “subgroup”? The solution comes from the fact that “sub” is a prefix, about which there are guidelines, although not inviolable ones. Prefixes generally do not take following hyphens before the words to which they are affixed, except in certain circumstances. Here they are:

Some prefixes usually take a hyphen (e.g. ex-convict). However, conventions may vary. For example “non” is sometimes followed by a hyphen, sometimes not. Different publishers adopt different styles, and with time hyphens tend to disappear: “worth while”, for example (cf “worth sixpence”), becomes “worth-while”, which becomes “worthwhile”. In 2007, the Shorter Oxford English Dictionary dropped hyphens from thousands of words. The dictionary’s Editor, Angus Stevenson, asserted that “people are not confident about using hyphens any more, they’re not really sure what they are for” and that “the hyphen is seen as messy looking and old-fashioned.” Or did he mean “oldfashioned”?

But then again, it’s more fun to hyphenate “non-hyphenated” than to nonhyphenate it.