In Japan’s ageing society, healthcare is forcing difficult political choices. However, prime minister Shinzō Abe says a 100 year-life society will enrich, rather than burden, this leading economy. Here, excerpts from two of his most powerful orations on the topic highlight the vision 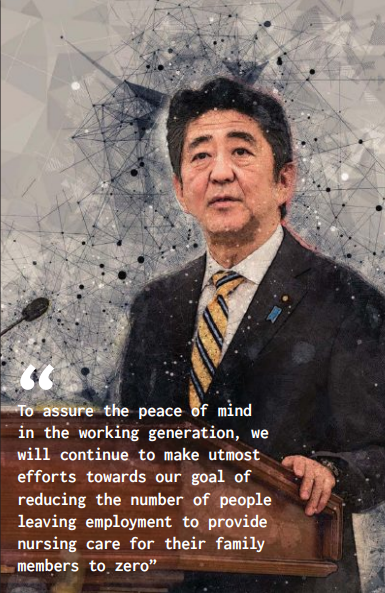 World Leaders for Universal Health Coverage: A High Level Discussion at the United Nations on Achieving the SDGs through Health for All, at the side event to the 72nd Session of the United Nations General Assembly, 18 September 2017.

While the progress of globalisation has brought great benefits to humanity, we have also witnessed growing concern and discontent over widening disparities. Moreover, the international community is facing various threats to human security, such as climate change, terrorism, refugee issues and infectious diseases. In this context, the promotion of health, especially universal health coverage, is essential for addressing these challenges and achieving the core principle of the 2030 Agenda; that is, the realisation of a society where no one is left behind.

However, our journey towards universal health coverage has just begun. There are tremendous challenges ahead of us. It will be by no means an easy path to expand the number of skilled doctors, nurses and community health workers, establish pharmaceutical supply and management systems, and introduce financial systems that ensure affordable access to basic health for all.

In the past year, we have welcomed several new leaders to the global health landscape. With UN secretary-general António Guterres, WHO director-general Dr Tedros Adhanom and UNDP administrator Achim Steiner, we have an unprecedented opportunity to remarkably expand the scope and quality of efforts toward universal health coverage. I am counting on their strong leadership.

Since the G8 Kyushu-Okinawa Summit in 2000, global health has become a top agenda item to be discussed by global leaders. Last year, the Government of Japan set global health as a major pillar of both the G7 Ise-Shima Summit and TICAD VI last year, and has dedicated itself to the promotion of universal health coverage. I would like to lead in-depth discussions on global health, making the most of future high-level meetings at the United Nations and TICAD VII to be held in Yokohama in 2019.

In closing, our contribution to achieve universal health coverage is an investment for the future, towards 2030 and beyond. I am firmly convinced that today’s event and the UHC Forum in December will provide a great opportunity to take concrete steps toward attaining universal health coverage. I am looking forward to seeing all the leaders from various fields present here today again in Tokyo.

Policy speech by prime minister Shinzo Abe to the 198th Session of the Diet, 28 January 2019.

The arrival of a 100-year-life society represents a significant opportunity.

If those elderly, who are healthy and motivated, can make use of their experiences and wisdom, Japan still has much room for further growth. Towards achieving a society where people can play an active role throughout their lives, we will review the existing system that limits continued employment to age 65. We will formulate a plan by this summer and implement it so as to secure employment opportunities until age 70.

We must be able to overcome the declining birthrate and ageing population if all people have opportunities to realise their potential, whether they are female or male, are young or old, or have disabilities or intractable illnesses.

To assure the peace of mind in the working generation, we will continue to make utmost efforts towards our goal of reducing the number of people leaving employment to provide nursing care for their family members to zero.

We will improve the nursing care environment to accommodate 500,000 people by the early 2020s. We also promote measures to reduce the burdens borne by caregivers, such as making use of robots, and improve their working conditions by raising the monthly salaries of staff in a leadership position, by up to ¥80,000 from October.

In order to strengthen our policy related to dementia, we will revise the Comprehensive Strategy to Accelerate Dementia Measures (New Orange Plan) by this summer. We will reduce the burdens of those who have family members suffering from dementia, by supporting them as the entire community through various measures such as setting up a ‘dementia café’ in all municipalities.

We will review traffic regulations entirely, and gradually lift regulations related to autonomous driving, as the safety improves. We will also review relevant systems to enable bedridden elderly people and others to receive comprehensive services online and at home, from medical examination to medication guidance.

Shinzō Abe is the Prime Minister of Japan.