I also summarized the various uses of biomarkers.

Biomarkers allow clinical trials to be performed with fewer subjects than might otherwise be possible. For example, a randomized placebo-controlled crossover study of the effects of a once-daily Polypill containing amlodipine 2.5 mg, losartan 25 mg, hydrochlorothiazide 12.5 mg, and simvastatin 40 mg on mean systolic blood pressure, diastolic blood pressure, and LDL cholesterol was completed within a year. It would have taken several years to show that this resulted in reduced morbidity and mortality. Large observational studies have shown that changes in these biomarkers predict those outcomes, justifying the use of the intervention.

Biomarkers are also useful for avoiding ethical problems associated with the measurement of clinical endpoints. For example, N-acetylcysteine has never been subjected to a randomized placebo-controlled clinical trial in the treatment of paracetamol (acetaminophen) overdose, with liver damage as an endpoint; instead, the plasma paracetamol concentration, a pharmacological biomarker of the risk, is used to predict whether treatment is required.

However, a major problem in using biomarkers is failure to understand the relation between the pathophysiology of the condition and the mechanism of action of the intervention. For example, smoking causes lung cancer, and a trial of the beneﬁt of education in preventing lung cancer might use smoking as a biomarker rather than the occurrence of the cancer itself. On the other hand, if chemotherapy is used to treat lung cancer, smoking is of no use as an indicator of outcome, since smoking is irrelevant to the action of the intervention. This is self-evident, but other cases may be less obvious.

It is perhaps unfortunate that this example, and a handful of others like it, has been used as an argument against mechanistic reasoning in clinical medicine, and in promoting the view that the results of randomized trials trump mechanisms. But the problem with the arrhythmia example was not that the hypothesis was wrong, which it was, but that it was for a long time assumed to be correct and that a trial was not needed. The lesson from this case is not that mechanisms are not useful, but that a priori mechanistic reasoning in the absence of supporting clinical evidence is hypothesis generating and should not be regarded as proof of concept. The assumption that it was so in this case is estimated to have led to more deaths than among US soldiers killed in wars such as those in Korea or Vietnam (Figure). 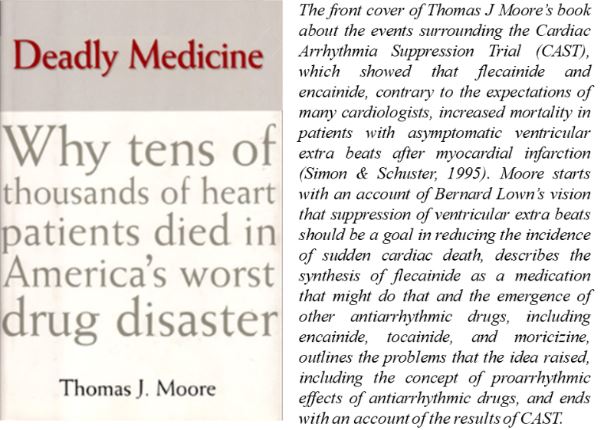