Many clinical outcomes, both primary and secondary, which I discussed two weeks ago, are not the desired outcomes, but markers of such—surrogate markers or biomarkers.

The term “biomarker” comes from the Greek combining form βιο-, from βίος life, and Old English forms of words meaning a mark, such as mearc. The IndoEuropean root MERG meant a boundary or border, which is what “mark” originally meant in English. Any object that indicated the position of a boundary was then called a mark, and the word was later extended to any indicator. Whence countermark, remark, and remarkable. A marque is the mark of a brand, especially a brand of car. Marquetry is fancy marks on furniture. A margin was also a border; white cells are marginated when they adhere to the sides of blood vessels. A march was another kind of border, typically that between England and Wales or England and Scotland. To demarcate is to draw a border. Margraves, marquises, and marchionesses owned or ruled over borderlands. A Celtic variant, MROG, territory or land, gives us the Welsh name for Wales, Cymru, and its nationalist party, Plaid Cymru.

The term “biomarker” emerged in the 1970s, for example in the title of a 1973 article, referring to the presence of material of biological origin. It continues to be used in this way in geological and ecological texts. An early clinical example, from 1977, is in a publication titled “Tumor biomarkers of value in the management of gynecologic malignancy will also be correlated with clinical course”. However, the concept itself is much older. For example, there are references to “biochemical markers” in 1949 and to “biological ‘markers’” in 1957. The figure below shows how interest in biomarkers has burgeoned in the last 15 years or so. 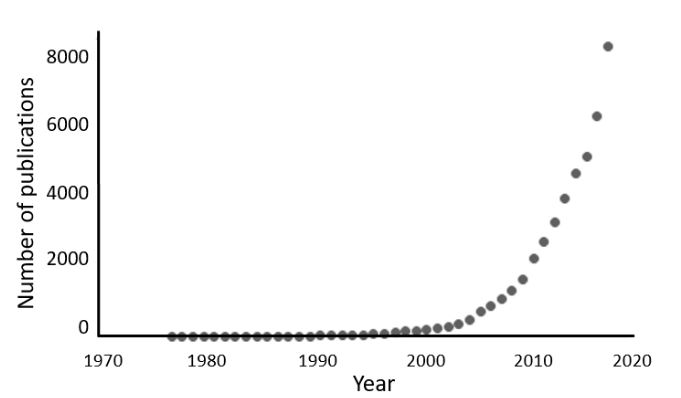 Figure 1. Numbers of publications since 1975 containing the term “biomarker/s” or any of the alternative terms listed below (source PubMed); the increase since 2005 has been so steep that about half of all the publications have appeared since 2014; the numbers and the shape of the curve are strikingly similar to those of “primary outcomes/endpoints” and “secondary outcomes/endpoints”, which I published two weeks ago

In this definition, the phrase “difﬁcult to observe” encompasses difﬁculties with outcomes that are, for example, hard to access or temporally remote.

The various uses of biomarkers include:

Biomarkers are also used at various stages of drug discovery and development:

The advantages and disadvantages of biomarkers will have to wait for another occasion.