I have previously discussed the idea of a minimal clinically important difference (MCID), and in my last piece focused on the word “clinically”. I suggested that it implied activity at the bedside, and that omitting it from the original phrase, making it a minimal important difference (MID), as its originators had suggested, was therefore justified.

This argument is an etymological one. The word “clinical” comes from Greek—κλίνη, a bed. Taking its origin literally, if it’s clinical it’s at the bedside. However, one should not commit the etymological fallacy, inappropriately insisting that the current meaning of a word or phrase should exactly reflect the meanings of the word or words from which it is derived. For example, “prestigious” is from Latin, praestigiosus, full of trickery or deceitful, which is what it meant when it entered English in the 16th century; nowadays it means of high status, inspiring respect and admiration. Meanings change.

Although “clinical” implied events at the bedside when it entered English in the late 18th century, it is no longer so strictly limited. A clinical lecture, originally one that was given at the bedside, is now any lecture on a medical subject. A clinical thermometer can be used anywhere, not just at the at the bedside. And a clinical pharmacologist specializes in everything about medicinal products used in humans, including their development, regulation, and use. But although “clinical” has lost its restrictive bedside connotation, it still nevertheless implies medical interventions.

The answer should be “the patient”, and terms such as “patient important” and “patient oriented” have been suggested. But others may benefit as well or instead.

For example, some improvement in cognitive ability in a patient with Alzheimer’s disease may benefit the patient relatively little, but be of great importance to carers and relatives.

In systems in which the patient pays for healthcare at the point of delivery, small differences may be of little importance to the patient but benefit those who gain financially from providing the improvement. This can result in too much healthcare—too much screening of asymptomatic individuals, too much investigation of those with symptoms, too much reliance on biomarkers, too many quasi-diseases, too much diagnosis, too much treatment, too many adverse reactions, and too much inappropriate monitoring.

Even in the NHS, incentives to seek small differences may reward the practitioner, with minimal benefit to the patient. For example, the Quality Outcomes Framework (QOF) system in the UK rewards general practitioners for achieving targets. If a patient’s HbA1c concentration is 64 mmol/mol (8%), lowering it to 59 mmol/mol (7.5%) will contribute to the doctor’s QOF points, and therefore income, for achieving the target, while benefiting the patient little and incurring extra NHS expenditure in tests, treatment, and monitoring. The QOF system is currently being phased out, and although some diabetes indicators are no longer included, points for lowering HbA1c are still awarded, as far as I can tell. In other cases achieving a QOF target may cause the patient harm. For example, when a GP earns QOF points by diagnosing stage 3 chronic kidney disease, the patient’s insurance status is altered without necessarily altering their healthcare. This is not what the minimal important difference was supposed to do.

Sometimes an important difference that benefits one individual may harm another. For example, a screening test that detects a few treatable cases may yield false positives that lead to harmful investigations. Take, for example, an analysis by the Canadian Task Force on Preventive Health Care of data from lung cancer screening (Figure 1). Of every 1000 individuals screened there were 40 true positive tests and three fewer deaths from lung cancer as a result of treatment; however, of 351 individuals with false positive tests, three had major complications and one died from invasive follow-up tests. 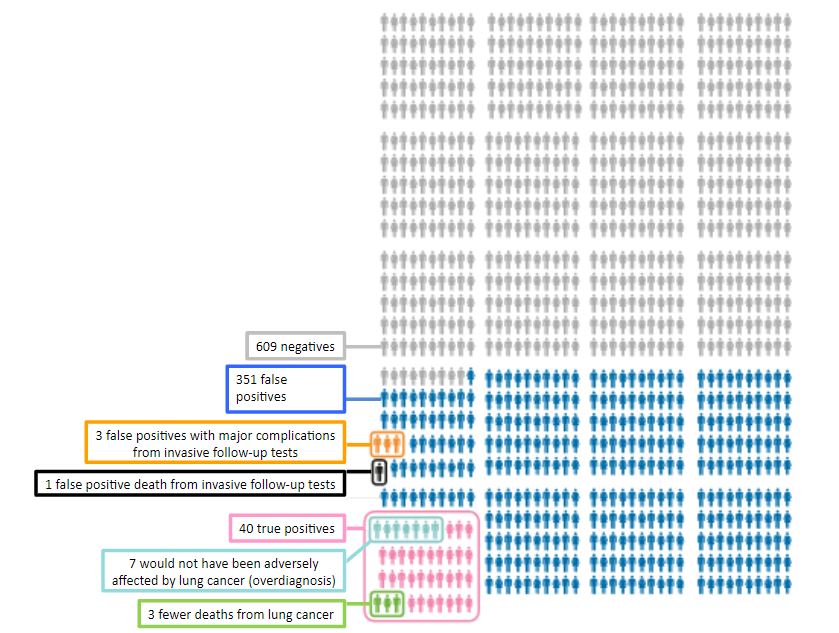 Acknowledgement: Thanks to Kamal Mahtani for helpful comments.