Last week I noted that section 96(6) of the Medicines Act 1968 required marketing authorization holders to publish information about their medicinal products in data sheets, whose form and contents were specified in the Medicines (Data Sheet) Regulations 1972.

Section 2 of the Regulations required data sheets to be in the form of either a loose sheet or “a page or part of a page … forming part of a publication consisting of a list of entries in respect of medicinal products”. The Regulations referred to this as a “data sheet compendium”. In December 1973 the Association of the British Pharmaceutical Industry (ABPI), having collected as many data sheets as they could, from both members and non-members of the Association, published them in a single volume, confusingly titled “Data Sheet Compendium 1974”. Such compendia then appeared annually until 2002, when the electronic compendium (eMC) first appeared and with it a print version (Figure 1). 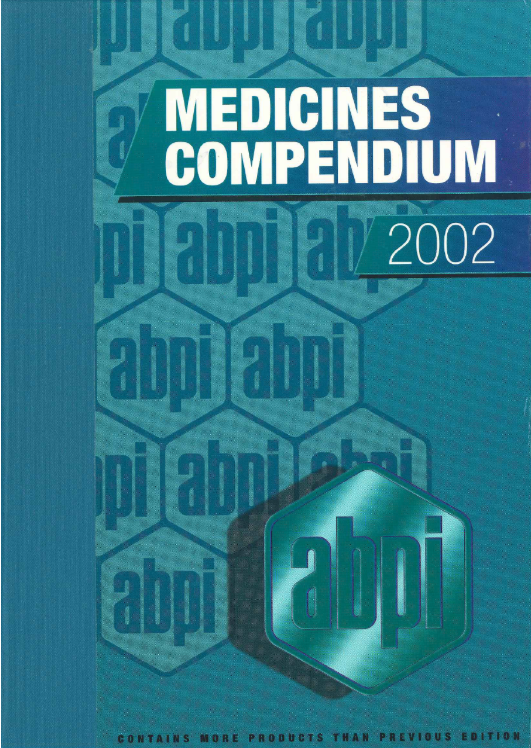 Figure 1. The front cover of the 2002 edition of the Medicines Compendium, published by Datapharm Communications Ltd, Virtual Health Network Ltd, and Pharmaceutical Press, to accompany the first publication of the electronic Medicines Compendium; whereas previously the entries had been organized alphabetically by pharmaceutical company, this compendium organized products alphabetically by brand names, from Abelcet to Zyvox

The IndoEuropean root [S]PEN meant to stretch, hang, or weigh. It gives us spider, spin, spindle, and spinster; pendant, pendulum, pendulous, pensive, expensive, expend, and spend; poise and avoirdupois; appendix, perpendicular, impend, stipend, suspend, suspense, and recompense. A dispensary is where drugs are weighed out. And “compendium” (Latin cum, with, + pendere, to weigh) literally means weighing things together, giving economy of scale. So a compendium is “an abridgement or condensation of a larger work or treatise, giving the sense and substance, within smaller compass” (Oxford English Dictionary). To clarify, I might make a compendium out of an encyclopedia by including all the entries it contains but abbreviating them. “Compendious” is defined as “containing the substance within small compass, concise, succinct, summary; comprehensive though brief”. Examples include William Salmon’s Synopsis Medicinae, or a Compendium of Astrological, Galenical, & Chymical Physick (1671) and A Compendious Medical Dictionary by Robert Hooper (1798).

But words can change meanings through misunderstandings. Here, for example, is George Steiner, Charles Eliot Norton Professor of Poetry at Harvard University, in a chapter titled “The Tongues of Eros” in his 2008 volume of essays My Unwritten Books: “The most compendious of dictionaries is no more than an abridged shorthand, obsolescent even as it is published.” Here Steiner is clearly using “compendious” to mean “encyclopaedic”.

Neither Fowler in Modern English Usage (1926) nor Gowers in his 1965 revision mentioned “compendious”. Eric Partridge, that acute observer of the verbal zeitgeist, noted it in his Usage and Abusage (1947), but merely said that it “may be applied to something that is briefly comprehensive, for its meaning is ‘compact’, ‘concise’, ‘summary’, ‘succinct’”.

But both Bob Burchfield in his 1996 edition of Fowler and Jeremy Butterfield in his 2015 edition say that “Like many words indicating size, [compendious] is somewhat extendible in meaning, and is often misleadingly applied to works that are more marked by their comprehensiveness than by their conciseness”. Here are two excellent examples. The first is from a book called Ancient Forestry (1969): “Livy’s history is an extraordinarily compendious work”; Livy’s History of Rome From its Foundation consisted of 142 volumes. The second is in the title of a 1967 paper in the Serbian journal Vojnosanitetski Pregled (the Military–Medical and Pharmaceutical Review), ‘Enciklopedije kao prirucnici znanja’, translated in Pubmed as “Encyclopedias as a compendium of knowledge”.

This change in meaning, a complete volte-face, is not to be found in the current online OED nor in the Shorter Oxford, although Webster’s New World College Dictionary (4th edition, 1999) gives both “containing all the essentials in a brief form; concise” and “comprehensive; inclusive”. Thus, Steiner’s statement about dictionaries demonstrates its own truth: the encyclopedic OED is indeed abridged—it does not define “compendious” as Steiner uses it.

“Compendium” is also, for example, being used in bioinformatics to mean a comprehensive database, as in The Compendium of Pharmaceuticals and Specialties and compendium analysis. But the Data Sheet Compendia are not compendia in the original sense. They are not concise, but comprehensive collections. Like others in the 1960s, the authors of The Medicines Act 1968, using the term 25 times in all, introduced a new meaning, and we have lost a useful word.