The IndoEuropean root DLKU, sweet, gives us words such as the saccharide dulcite or dulcose, the organ stop called dulciana and the musical instrument called the dulcimer, dulcet billet-doux, such as Don Quixote might have written to his imaginary love Dulcinea del Toboso, and the life he might have led with her, la dolce vita. The Greek derivative γλυκύς, sweet, gives us glycerol, glyceraldehyde, glycerine and nitroglycerine, glucose and glucoside, glycolysis and glycoside. Add γλυκύς to ῥίζα, a root, and we get Glycyrrhiza glabra (Spanish liquorice) and Glycyrrhiza echinata (Italian liquorice), among others. “Liquorice” is a direct descendant of γλυκύρριζα. In early times its spellings (e.g lycuryce) reflected its Greek origin, and it gained its modern spelling, with a q, from confusion with “liquor”, a different word altogether. Only in the UK does the spelling “liquorice” predominate in bioscience papers; elsewhere “licorice” is the preferred spelling (Table 1). The Italian word for liquorice, regolizia, and the French word réglisse are formed by metathesis from the late Latin version liquiritia.

Table 1. The frequencies with which the two variants “liquorice” and “licorice” are used in bioscience papers from addresses in the UK, USA, and the rest of the world (source PubMed); χ2= 128, P<10–26

Greek physicians thought that liquorice reduced thirst, and they used it to treat dropsy, even though it causes hyperaldosteronism and fluid retention. It has also been used to treat coughs and to disguise the taste of unpleasant medicines. Pliny mentioned glycyrrhiza in his Naturalis Historia, and others, such as Celsus, called it dulcis radix, which means the same thing, a sweet root. Dioscorides recommended it for “sharpness of the arteries”, “burning of the stomach”, chest, liver, bladder, and kidney disorders, parasitic skin diseases, wounds, and pterygium.

Liquorice has also been included as a component of many patent medicines over the years. For example, we learn from the BMA’s publication Secret Remedies (1909) that Dr Lauser’s Cough Drops, a liquid formulation, contained, not what it said on the bottle, but liquorice, senna, aniseed, and ammonium chloride; Beecham’s Cough Pills had similar contents plus a small amount of morphine; and Keating’s Cough Lozenges contained morphine, liquorice, and ipecacuanha. Doan’s Backache Kidney Pills came in boxes of 40 kidney pills and four “dinner” pills; the latter contained oil of peppermint, podophyllin, aloin, jalap resin, powdered capsicum, maize starch, acacia gum, extract of henbane, and powdered liquorice.

A cachou is defined in the Oxford English Dictionary as “A sweetmeat, generally in the form of a pill, made of cashew-nut, extract of liquorice, etc., used by tobacco-smokers to sweeten the breath.” The Chambers English Dictionary (1988 edition, but not since) took a more cynical attitude: “….used by some smokers in the hope of sweetening the breath.”

Glycyrrhizic acid, the active constituent of liquorice, is a conjugate of glucuronic acid and glycyrrhetinic acid, also known as enoxolone (Figure 1). When it was first introduced into clinical practice, it was as a treatment for Addison’s disease. It was then used to treat eczema and other skin conditions, starting in 1955, as described in a series of letters to The BMJ, with variable results, and was later said to be less effective than hydrocortisone. 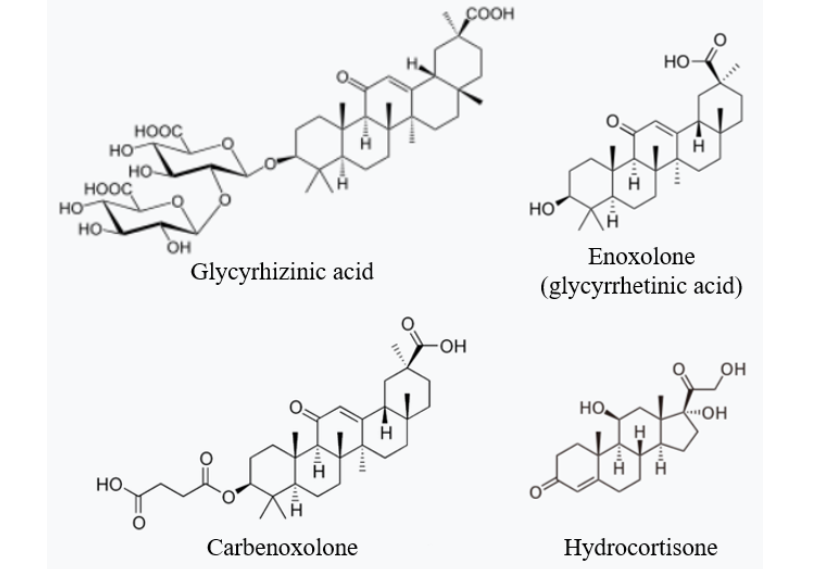 A paste of powdered succus liquiritiae was used to treat gastric ulceration in Holland in 1946. Then in 1962 Richard Doll and colleagues showed that carbenoxolone (glycyrrhetinic acid hydrogen succinate; Figure 1) was also efficacious. It had been synthesized in 1959 and was marketed by Biorex, the same company that had advertised glycyrrhetinic acid as a non-steroidal anti-inflammatory agent in 1957. Curiously, the product known as Caved S was also supposed to be effective in curing peptic ulcers—and that contained deglycyrrhized or deglycyrrhizinated liquorice, a fact that puzzled the unsceptical medical students of my day.

But don’t give up on medicinal liquorice. Although it inhibits 11β-hydroxysteroid dehydrogenase and 17-20 lyase and lowers serum testosterone concentrations, it has been used as an aphrodisiac. In the Kama Sutra and its sequel, the Ananga Ranga, it is called madhuka kalka, madhu meaning honey. To get the best effect, follow this recipe: grind equal quantities of liquorice root, sesame seeds, and fennel seeds, boil them rapidly in water for 5 minutes, and drink the strained fluid. As I have pointed out before, perhaps liquorice can make you lickerish.