As I discussed last week, definitions should preferably not include negations. Some terms that denote drug classes break this rule.

Non-steroidal anti-inflammatory drugs (NSAIDs), a heterogeneous group of compounds, include structurally different drugs with different actions on the major isoforms of the cyclo-oxygenases (COX1 and COX2). The term “coxibs”, given to recent drugs, because they are relatively selective for COX2, gives the impression that none of the earlier NSAIDs is at all selective, which is not the case; nimesulide and meloxicam, for example, are in the same range of selectivity as celecoxib, and diclofenac is also relatively COX2 selective.

Grapiprant, used in veterinary medicine, has anti-inflammatory properties and is non-steroidal. However, its mechanism of action is as an antagonist at prostaglandin EP4 receptors.

The WHO’s Anatomical Therapeutic Chemical (ATC) classification struggles to cope with these difficulties. It includes the general labels “Antiinflammatory and antirheumatic products” (section M01) and “Antiinflammatory and antirheumatic products, nonsteroids” (subsection M01A) (Table 1). However, the inclusion of the pseudo-mechanistic category labelled “coxibs” is inconsistent, and a miscellaneous category lumps unrelated compounds together because they cannot be accommodated elsewhere. Corticosteroids for systemic use are in section H02. Acetylsalicylic acid is classified with other analgesics under N02, but also elsewhere for various reasons. The anilides, including paracetamol, are also in N02, as are the pyrazolone analgesics phenazone, metamizole, aminophenazone, propyphenazone, and nifenazone.

Table 1. The ATC classification of “Antiinflammatory and antirheumatic products” (section M01), with examples 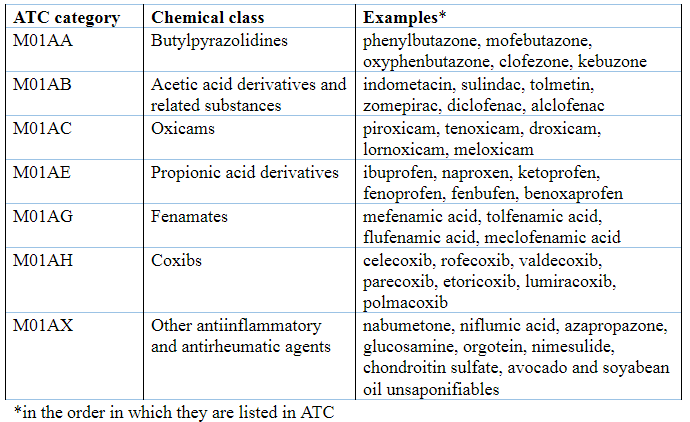 The first marketed compound now classified as an NSAID was phenylbutazone. It was originally used as a complexing agent to solubilize the analgesic aminophenazone (aminopyrine), allowing it to be given parenterally, in a formulation called Irgapyrin or Butapyrin, first marketed in 1949. The structural similarity of the two compounds can be seen in Figure 1. The combination was so effective that phenylbutazone was then studied on its own and found to have anti-inflammatory properties. It was marketed as Butazolidin in 1952. Other butazone derivatives followed: ketophenylbutazone in 1958 and oxyphenbutazone in 1960. 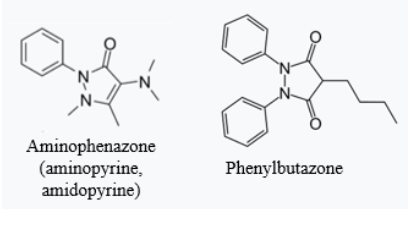 Since then a large range of drugs classified as NSAIDs have been synthesized. My current list runs to 108 in all (Figure 2), excluding those used solely in veterinary practice. 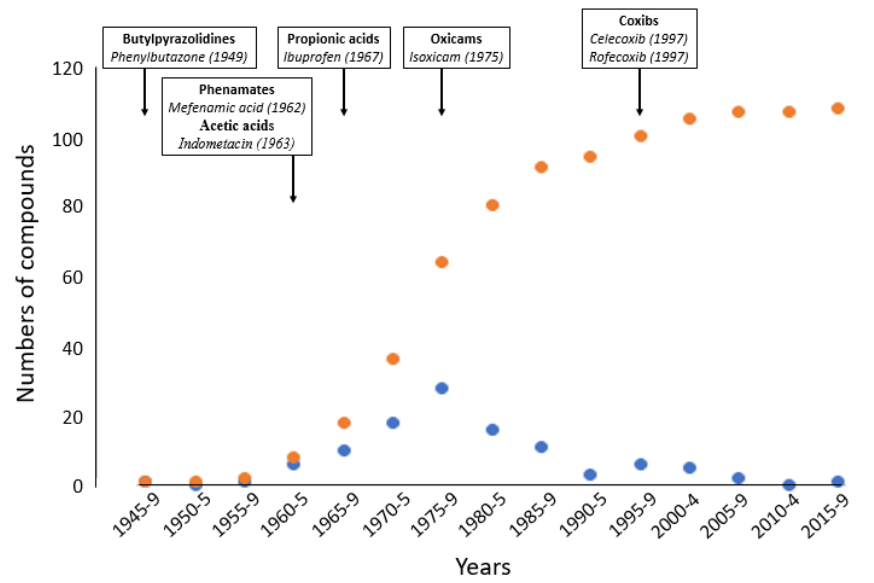 Calling all of these compounds non-steroidal anti-inflammatory drugs obscures the many differences that distinguish them from each other. It would be better if we were to classify them primarily according to mechanism of action combined secondarily with structure. The ways in which they inhibit cyclo-oxygenase differ, and subcategories could be devised.