The recent rescue of 12 Thai boys and their coach from an underground cave, two and a half miles and several hours from the surface, had the world enthralled. Having emerged, they were put into isolation, mainly because of concerns about infections, in the context of malnutrition and immune suppression, and because they might already have contracted infections while in the cave, particularly the one colloquially called cave disease.

The IndoEuropean root KEUƏ meant to swell, or as a noun, a vault or hole. Its Greek derivatives included κοῖλος, hollow, and κοιλία belly or bowels, giving us koilonychia, coeliac, coelom, and coelacanth. Words ending in –cele (Greek κήλη, a tumour or hernia), of which the Oxford English Dictionary gives nearly 100 examples, include blastocele, bronchocele, haematocele, hydrocele, meningomyelocele, omphalocele, spermatocele, and varicocele. “Codeine” comes from κῶος, a hollow, which gave κώδεια, meaning a poppy head. Another derivative κύειν, to swell, gave κύησις, a swollen belly and hence pregnancy, from which we get pseudocyesis. The corresponding Latin word was inciēns, pregnant, giving the French word enceinte, which is also sometimes used in English. The Greek word κῦμα denoted another kind of swelling, a wave—a kymograph is an instrument that depicts changes in pressure or movement, such as in a piece of contracting muscle. The Latin word cavum meant a hollow place; its plural, cava, gives us vena cava and of course cave, cavern, cavity, concave, and excavate. An unrelated Greek word for a cave, σπήλαιον, gives us spelaeology, the study of caves, and spelunkers, those who explore them. Another unrelated word, ἄντρον, gives us antrum, as in the pyloric antrum of the stomach and the mastoid and maxillary antra.

Cave disease, however, is a specific complaint. In 1948, Washburn, Tuohy, and Davis observed 21 men who developed pneumonia after exploring an abandoned chalk mine in Arkansas. They did not establish a cause and called it “cave sickness”. A similar case had already been reported by Cain, Devins, and Downing in 1947. In February 1954 students who visited a cave outside Sarare in Venezuela developed flu-like illnesses and positive histoplasmin tests; dust in the cave contained Histoplasma capsulatum, the probable cause.

Then in June 1954 in Port Elizabeth, at the Annual Scientific Meeting of the Medical Association of South Africa, popularly known as “the Medical Congress”, JF Murray presented a series of cases of histoplasmosis in cavers. In the following year, Lurie and Borok reported that “for the previous two years JF Murray has been investigating cases of ‘cave disease’ in a group of spelaeologists, the majority of whom showed a positive Histoplasmin skin test.” Two years later, in March 1957, Murray, with Lurie, Borok, and other co-authors, published a study of 56 members of the Transvaal Spelaeological Society; 53 had positive skin tests for Histoplasma capsulatum and 46 had histoplasmosis.

Also in March 1957, Geoffrey Dean, a physician in Port Elizabeth, reported the case of a Mr John Wiles of the Rhodesian Geological Service, who had “explored a complex of deep caves in the Urungwe Native Reserve to see if it were possible to use as fertilizer the large quantities of bat guano that lay there … [which] in places was over eight feet deep.” Twelve days later he developed a fever, a burning sensation in the chest, aching in the back and head, and a cough. He became cyanosed and tachypnoeic and there were crackles in both lungs and bilateral basal pleural rubs. A chest x-ray showed woolly opacities scattered throughout the lungs, most markedly at the bases. Tests for psittacosis, typhoid, typhus, brucellosis, and parasite infections were all negative. Recalling Murray’s 1954 presentation, Dean had a histoplasmin skin test carried out; it was positive. He gave Wiles pethidine, chlorpromazine, and prophylactic tetracycline. Today he might have used amphotericin and itraconazole. 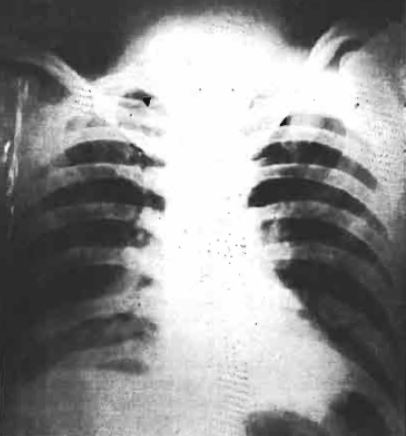 Chest x-ray of John Wiles (S Afr Med J 1957; 3(3): 79-81). The caption reads “There is a mottled opacity at both bases, particularly in the right lower lobe, where the features simulate a bronchopneumonic condition. The hilar shadows are accentuated, but do not suggest an adenopathy. In the upper lobe there is accentuation of bronchovascular striations.”

Dean noted that large caves in the Matopo Hills, which presumably harbour Histoplasma, were regarded locally as “M’tagati” or bewitched; the word is from Zulu— umthakathi, one who mixes medicines. Dean also included a speculation, which he later explored in detail in his autobiography (pictured), about the archaeologists who had explored the tomb of Tutankhamun in the Valley of the Kings in 1922/3, several of whom, including Lord Carnarvon, died soon after. Could histoplasmosis have been one manifestation of the Curse of the Pharaohs?