Now 3.14 is a mere approximation of the exact value of π, which is an irrational number, whose decimal expansion is unending. It  was a shock to the Pythagoreans when they discovered that √2 was irrational (see the Box). What they found was that although you can use a straight edge and compasses to draw the line that forms the hypotenuse of a right angled triangle whose right angle is enclosed by equal sides, you cannot measure it as a ratio of two numbers. It is incommensurable, or as they put it, inexpressible (ἄλογος). The horror lay in the discovery that some of the phenomena in the universe that can be described mathematically cannot be described as the ratio of two numbers. Reality trumps aesthetics. Or, as TH Huxley put it, the great tragedy of science is the slaying of a beautiful hypothesis by an ugly fact. 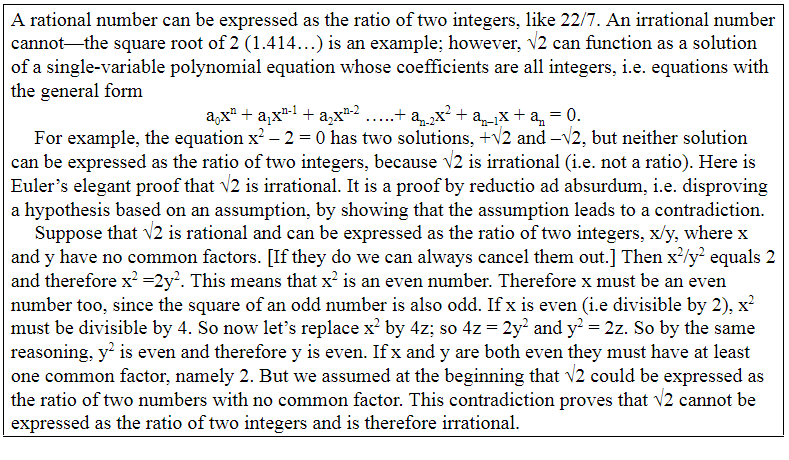 But π is not merely irrational; it is also transcendental. A transcendental number is an irrational number that cannot function as a solution to an equation of the type shown in the Box. Such numbers include π, 2√2, and sin x. Although it was long recognized that π was irrational, it was not until 1882 that Carl Louis Ferdinand von Lindemann proved that it was transcendental. He built on the work of Charles Hermite, who proved in 1873 that the irrational number e was also transcendental, as is eπ. Since π is transcendental, a line of length π cannot be constructed. Squaring the circle means doing something impossible—you cannot draw a square that has the same area as a given circle, because each of its sides would have a length that was a function of π. For example, a circle of radius 2 has an area of πr2, which equals 4π, and each side of the corresponding square would have to have a length of 2√π (3.5449…). Futile attempts to square the circle go back at least as far as the Egyptian scribe Ahmes, as described in a document from the 17th century BC, called the Rhind papyrus (Figure). 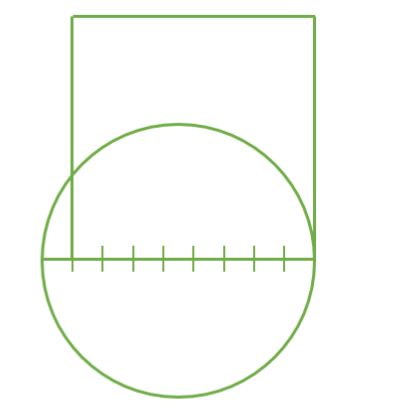 The great New Zealand mathematician Alexander Aitken, who was professor of mathematics in Edinburgh (1946–67) and whose memory was prodigious, memorized the expansion of π to 2000 digits. “It would have been a reprehensibly useless feat,” he said, “had it not been so easy.” On Pi Day 2004 Daniel Temmet, the autistic author of Born on a Blue Day, came to Oxford and recited the decimal expansion of π from memory to 22 514 digits in five hours and nine minutes; it remains the record.

The constant π is the ratio of the circumference of a circle to its diameter, C/D and so the circumference is equal to 2πr, where r is the radius. This suggests a different way of looking at it, in terms of the radius rather than the diameter. The circle constant, as it has been called, is the ratio of the circumference to the radius, C/r, and that equals 2π, which has also been called τ (tau), confusingly, since the letter tau (τ) looks like half pi (π). The arguments in favour of tau as the constant to quote rather than pi were first made by mathematician Bob Palais. Tau equals roughly 6.28; so you can celebrate Tau Day, or Two Pi Day, on 28 June, by eating two pies.

If you are torn between Pi Day and Tau Day you can compromise and celebrate Pau Day, where Pau = (Pi+Tau)/2 = 4.7. Pau Day therefore falls on 4 July or, in America, 7 April.

The next chances you will have to celebrate a variant of Pi Day will be Two Pi Day on 28 June and Pau Day on 4 July (Table). You may think it irrational to do so, but although when we celebrated Pi Day we did not experience Kantian transcendentalism, it was certainly very enjoyable. It did, however, cost us more than £3.14p.

Table. Some Pi Days to celebrate