I recently pointed out that some people, believing that words ending in
–penia had been Americanized, spelt them with –paenia or –poenia, ignoring (or ignorant of) the fact that the suffix is from the Greek word πενία, meaning poverty.

This phenomenon is known as hypercorrection, which is the false use of a spelling, pronunciation, or construction, modelled on an apparently analogous prestigeful form (a definition that I have modelled on the definition of “hypercorrect” in the Oxford English Dictionary). For example, when a well known cricket commentator recently announced his forthcoming presence on Classic FM as “Henry Blofeld, better known to you and I as Blowers”, he was hypercorrecting from “better known to you and me” (compare “better known to me”). Some justify this use by suggesting that “you and I” is a composite pronoun, which takes the same form in both the subjective (nominative) and objective (accusative) cases; that “you and I” in the objective case is sanctioned by widespread use (a strong argument); and that great authors (e.g. Shakespeare in The Merchant of Venice) have hypercorrected like this (not such a strong argument). Others regard all this as protesting too much. I make no comment.

Here’s an example of a hypercorrection that stems from a false etymology. The word “fetus” derives from the Latin word feto, I breed. The hypercorrect “foetus” has been around since at least the beginning of the seventh century. St Isidore, Archbishop of Seville, in a section entitled “De homine et partibus eius” in his Originum sive etymologiarum libri (Books of Origins or Etymologies), commonly known as the Etymologiae (published in about 620 AD), incorrectly wrote that it was derived from foveo, I keep warm: “Foetus autem nominatus, quod adhuc in utero foveatur” (XI, 1, 144). Isidore’s text was highly derivative, and he cited many Latin authors, such as Cicero, Ennius, Juvenal, Lucan, Martial, Ovid, Terence, the etymologist Varro, and particularly Virgil, as well as the Bible. However, he gave no source for his opinion on f[o]etus.

The Oxford English Dictionary says that both “fetus” and “foetus” appear in Latin manuscripts (dates unspecified), and the Loeb edition of Varro’s De Lingua Latina cites “faetus” from the version known as the Codex Laurentianus. However, all this may be medi[a]eval—the Oxford Latin Dictionary gives no instances of “foetus” or “faetus”.

The earliest English language citation in the OED (from 1398) uses the spelling “fetus”. It is not until 1610 that “foetus” is first recorded, in a translation of one of Hippocrates’ aphorisms: “If the monthly purgations doe keepe their course to a woman with child, it is impossible that the fœtus should be in health”. An earlier instance, “the Foetus of the Latines, and Embryon of the Greekes” (T B la Primaud, 1594), included in the print version of the 2nd edition (1989), has now been suppressed by the OED, since it reports the use of the word in Latin, not English.

The IndoEuropean root DHĒ meant to suck, hence to nourish, hence to be fruitful or happy. The Greek derivative θήλη meant a nipple, from which we get endothelium, epithelium, mesothelium, perithelium, and urothelium. By consonantal shift we get words such as female (one who suckles), feminine, effeminate, fecund, and felicity. Fetus in Latin meant breeding or birth. Effete literally means exhausted by birthing, and superfetation in animals is a second conception occurring after the first but before delivery; no hint of an added o in those. Fellare in Latin meant to suck the nipple, fellator one who did so; fellatio is a different type of sucking.

Below I have charted the changes with time in the uses of “fetus/fetal” versus “foetus/foetal” as textwords in publications indexed in PubMed (Figure 1); “fetus” wins. 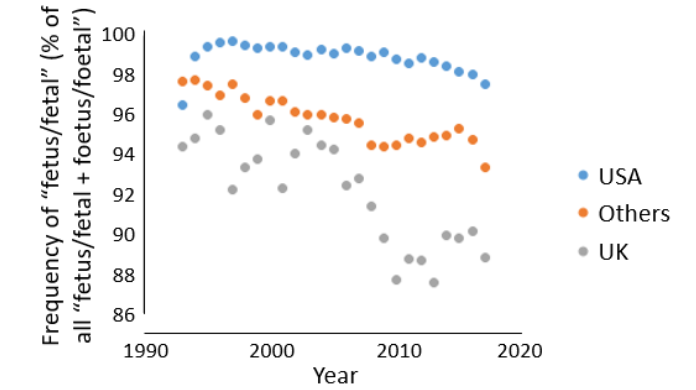 In recent years the incidences of “fetus/fetal” have been falling, even in the USA, but especially in the UK; even so, they remain very high compared with “foetus/foetal”

The etymological fallacy is the inappropriate insistence that the current meaning of a word or phrase should be dictated by the meanings of the word or words from which it is derived. For example, “prestige” is from the Latin word praestigiosus, meaning full of trickery or deceitful, which is what it meant when it entered English in the 16th century; nowadays it means of high status, inspiring respect and admiration, as the definition of “hypercorrection” above implies. However, there is no fallacy when choosing spellings. Although we don’t, we could legitimately spell “economy” “oeconomy” and “ecumenical” “oecumenical”, which were in fact early English forms, from the Greek οἶκος, a house. We can choose to spell “fetus” as “foetus” or even “faetus”. But both etymology and usage favour “fetus”.