There is much discussion about the right of an individual to die, but not enough about the role of relatives and friends 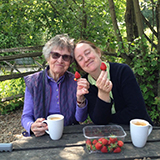 This is how I killed my mother. On 30 October 2017 I had just “deplaned” at Heathrow from Melbourne. I had the strangest feeling I should not go directly to bed. I wondered if I should visit my mother, Margaret Black, a 92 year old retired anaesthetist living very independently in a warden assisted housing complex in Kent. At midday, I got a call from my sister—mum had developed abdominal pain, pressed the alarm button, and phoned her GP. Could I go? She was confined to her chair and could not move. Her GP had been unable to call her back and so had alerted the ambulance service. First responders on that day were the local fire brigade, all part timers in Cranbrook, including the local butcher. She held forth from her chair, relating her symptoms clearly while the warden packed her bag. The ambulance arrived, she helped them do her ECG (the electric massage unit in her chair was interfering with the signal), and they then set off to hospital. I ran to grab a taxi.

In a jet-lagged haze, mired in traffic and beset by intermittent mobile phone coverage, I had numerous calls with hospital switchboards, the ambulance service, nurses, surgeons, and relatives. Mum’s beloved NHS went into full swing and diagnosed a dissecting abdominal aneurysm. Despite all the other conditions she had survived—including profound deafness, osteoarthritis, cataracts, a hysterectomy, heart attacks—this had been missed. And now there was a decision to be made—to go for life saving surgery or not. I knew her views, she was not interested in heroic efforts to prolong her life, and would absolutely hate to be in an intensive care unit. She felt complete, she had outlived her husband and all but one of her five siblings, and had had a belter of a summer, surrounded by children and grandchildren as her youngest son was happily married in Dublin. But a decision still had to be made, so I brokered the conversation that sealed her fate.

I spoke one last time with my mother on a three way call with her surgeon. He explained clearly that if she wanted to “have a go” they would need to transfer her urgently to the London Hospital, and if not they would keep her comfortable until she passed away. She could not hear well so asked me to explain.

“You have a choice mum, you can go for surgery, with some chance of survival, or you can refuse, in which case you will die in a matter of hours”. She had a few questions, paused, and then I heard her say very clearly.

“I don’t want surgery and I understand the consequences”. In fact, I cannot remember exactly the words she used, but the firm tone of her voice was unmistakable. She made a conscious decision to die. Without a clear statement like this, there could well have been a heroic last attempt to maintain her life. My persistence in making sure she was heard ended those efforts.

It was our last conversation. Until she lost consciousness she lobbied for her favourite cause—Dignity in Dying. She explained to the entire emergency department her firm conviction that people should decide their own fate and was clear and persuasive. She also thanked the staff. By the time I got there she could no longer speak, and I held her hand for an hour till she passed away. She died in great dignity on a hospital trolley in Accident and Emergency at the Royal Tunbridge Wells hospital in Pembury. It was a calm death—the staff were kind, she had pain relief and the last rites, and had her wishes respected. Family that came shortly after her death were able to stay with her a while. At no time did I feel alone. But watching her die was extraordinary, feeling her pulse beat till it stopped, her hands cool, and sensing death draw over her. Despite all my medical training, my emotions were overwhelming. I had known her views, agreed with them, and understood the medical technicalities of her condition and her options, but it was still a very difficult moment. I howled that night with pain.

More and more people will have this experience, when by ensuring their loved ones’ views are upheld, or by actively preventing intervention, they will end a life. My husband’s actions led to his mother’s death. After some years of living with dementia—leading to the loss of everything except her response to him saying “Mama,” to which she still replied “what is it, my son, tell me”, he intervened to stop doctors in Belgrade intubating her after a massive stroke. He had gradually said goodbye to her, but this last action was quite definite.

Death is no longer just in the hands of god or fate. It is often a decision. There is much discussion about the right of an individual to die, but not enough about the role of relatives and friends and the feelings of guilt, shame, ambivalence, regret, or uncertainty that may arise.

So did I kill my mother or not?