Meldonium is in the news again. It was banned by the World Anti-Doping Agency (WADA) in January 2016 for use by sportsmen and women, because it supposedly increases blood flow and therefore exercise capacity. A few months later, the tennis player Maria Sharapova was found to have taken it, reportedly to “combat a magnesium deficiency, heart problems and because of a family history of diabetes”, and was banned from competition for 15 months. Now, like some others, the Olympic curling bronze medallist Alexander Krushelnitckii (I use the transliteration that appears on the back of his Olympic jersey) has also been incriminated.

The name “meldonium” goes back to the name of another chemical, ammonium. It starts with a compound IndoEuropean root, BHES-AMADHO, meaning sand, giving the Greek word ψᾰμᾰθος, shortened to ψάμμος. The German pathologist Rudolf Virchow (1821–1902) first used the term “psammoma” in 1900, in a paper titled “Das Psammom”, to describe meningiomas that contained small, round, laminated concretions like grains of sand, now called psammoma bodies. These bodies are also found in other tumours, such as papillary carcinoma of the thyroid gland and gynaecological neoplasms, psammocarcinomas and psammosarcomas.

In different dialects the two Greek words for sand were respectively truncated to ἄμᾰθος and ἄμμος. A legend has it that after Zeus had rescued Herakles from dying of thirst in the Libyan desert he started to be worshipped locally as Zeus Ammon and his wife Hera as Ammonia. The name Ζεύς Ἄμμων was also used elsewhere for non-Greek divinities, especially the Semitic god Balaam. His counterpart in Egypt was called Ammon, the ram headed god, famous for his temple and oracle in the Libyan oasis of Siwa. He was also called Amun or Amen, and lent his name to Egyptian rulers, such as Amenhotep, who were supposedly descended from him. A Semitic tribe of people who lived to the East of the Jordan River were known as Ammonites, and the capital of present day Jordan is Amman.

Sal ammoniac, salt of Ammon, ammonium chloride, was supposedly first extracted from desert sand contaminated with camel dung near Ammon’s temple. You can extract the mononuclear gaseous hydride ammonia from it, and when you hydrate ammonia, NH3, you get NH4+, ammonium. Then the suffix -onium was used to name comparable hydrides in the nitrogen series and subsequently compounds in the chalcogen and halogen series (Table 1). 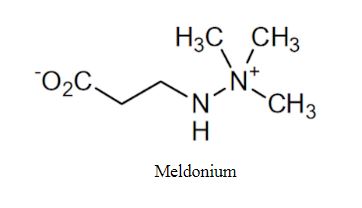 Meldonium is the International Nonproprietary Name (INN) of 3-(2,2,2-trimethyldiazaniumyl)propanoate, whose structure is illustrated here. The name was coined by taking the letters me and ld from the chemical name and, since it is a mononuclear cation in the nitrogen series, adding -onium.

Meldonium is transported by and inhibits an organic cation transporter (OCTN2), which transports carnitine and is also known as SLC22A5. It is therefore retained in muscle tissue during long term treatment, at least in animals. The Latvian manufacturers, Grindeks, who market meldonium under the brand name Mildronate, and have argued that it should not be prohibited, say that “it is a cytoprotective substance, which is used to prevent death of ischemic cells, and not to increase performance of normal cells” and that “[it] is mostly prescribed . . . to treat heart and cardiovascular diseases, including stable angina pectoris, chronic heart failure . . . , cardiomyopathy, functional cardiovascular disorders; also when there are acute and chronic ischemic brain blood circulation disorders, reduced working capacity, physical and psycho-emotional overload as well as during the recovery period after cerebrovascular disorders, head injury and encephalitis.”

Whether or not it is effective in such conditions, athletes use meldonium in the belief that it improves exercise performance and increases recovery rate. However, this is debatable. When my good friend and colleague David Nunan reviewed the topic in 2016 he found “very weak evidence for a performance enhancing effect in athletes taking meldonium/Mildronate”. There is of course the argument that even if meldonium is not performance enhancing, an athlete who thinks that it is may benefit from it, if only from a placebo effect. However, it seems a shame to be deprived of an Olympic medal by taking a substance that probably has little beneficial effect on your sporting performance.